Sledgehammers to shovels: celebrating the one-year anniversary of "Demolition Day"

Share All sharing options for: Sledgehammers to shovels: celebrating the one-year anniversary of "Demolition Day" 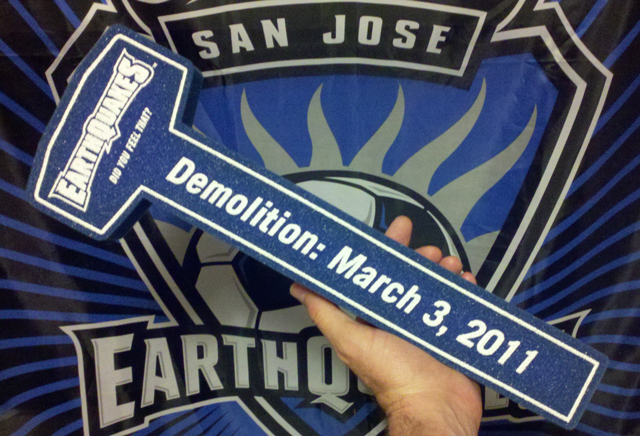 Did you feel that? If you were one of the season ticket holders in attendance one year ago today at the San Jose Earthquakes “Demolition Day” party, the team’s 2011 slogan took on a whole new meaning.

As a powerful excavator prepared to tear a hole in the side of the FMC buildings that stood on the property that would one day potentially be home to a new soccer stadium, the operator positioned the impressive machines large claw above an open area of pavement and slammed it downward. The reverberation from the impact caused the crowd to jump in place, and proved a harbinger for the destructive display yet to come.

For the next half-hour or so, the excavator made mincemeat of the steel and aluminum factory building as Earthquakes players and supporters watched with enthrallment. Slowly the outward wall of the building, which had been ceremoniously painted with graffiti wishing the building a fond goodbye, would be reduced to scrap metal and rubble. Standing guard over the proceedings was a military tank of the kind once manufactured at the site many years before the complex had been shut down. With a break in the action, curious players and coaches, including star forward Chris Wondolowski, ventured toward the tank and excavator for a close-up look at the true stars of the day. What was held as a celebration of what was to come, only served to highlight just how far the organization had to go before it would have a stadium it could call its own.

Once the assemblage cleared out, clutching their souvenir foam sledgehammers and harboring thoughts of returning to cheer on the Earthquakes in a sparkling new facility, the demolition team set about completely clearing the parcel of any remnants from the decades-old factory. Serving to remove the urban blight created by the abandoned facility, the Earthquakes organization made the gamble to prepare the land for construction of their proposed new stadium long before the land-use permit required to design the stadium was secured. And for the better part of the year, the gamble proved risky.

But in recent weeks, the situation has cleared, and the Earthquakes know the parameters for construction that they must follow. Designers and engineers are at the ready to prepare the extensive drawings that will be submitted to the City of San Jose for approval and the construction team for execution sometime in the coming months. A financial plan to fund the entire project is also in the plans, as is the need to go forth with purchasing the land as agreed on in prior negotiations with the city.

Though no timetable has been released, Earthquakes stadium supporters can expect a “Groundbreaking Day” celebration in the near future, when they might possibly be able to turn in their foam hammers for foam shovels. And instead of witnessing a giant excavator frustratingly pounding down on the pavement, they will hope to catch the first glimpse of the rich soil below that will serve as the Earthquakes playing field sometime in the 2013 MLS season. From the remnants of “Did you feel that?” will ring the new slogan for our time, “Build it now!”

Looking back on Demolition Day, enjoy some of the videos of the event:

Center Line Soccer's own Joe Nuxoll checks in with some raw footage of the demolition:

For the long (and raw) version of "Demolition Day" comes this video from Chris Reiko:

Do you have any stories, photographs, and videos to share from last year's "Demolition Day" celebration? Please share them for in the comments below for all your fellow San Jose Earthquakes new stadium supporters to enjoy.