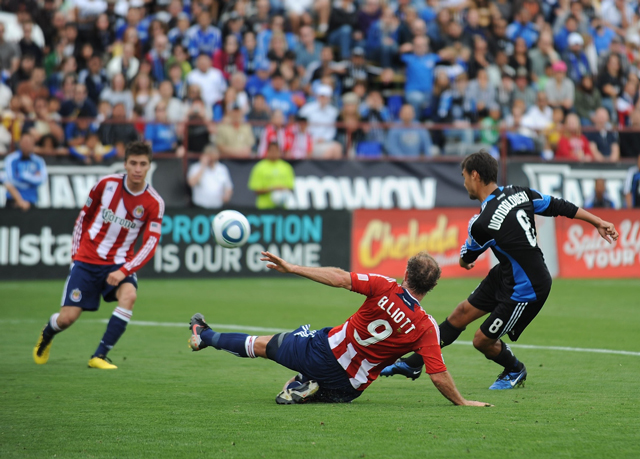 Was there some real voodoo in the donuts that the San José Earthquakes players ate last night? Instead of the “Magic is in the Hole”, Quakes’ fans are saying that “The Magic was on the pitch” today in Portland, Oregon where five different San José Earthquakes scored a goal and Jon Busch was able to hold onto another clean sheet in the match against Chivas USA.

Coming into the final game of the Portland Timbers tournament, the San José Earthquakes had only 2 points and hadn’t yet scored a goal for themselves (Portland scored an own goal in Monday night’s 1-1 draw and AIK held San Jose to a 0-0 draw on a cold Thursday night). What a difference a weekend makes!

Instead of snow on the ground or rain falling from the sky, the Sunday afternoon match was basked in 55°F Oregon sunshine. Quakes fans were happily greeted by the sight of Ike Opara on the back line, playing along side Justin Morrow, having joined the team directly from the US Men’s U-23 Olympic camp. In his time with the Olympic hopefuls, Opara scored a goal against FC Dallas and wore the captain’s armband in Wednesday’s 2-0 victory against Mexico. Victor Bernárdez, one of the other Quakes centerbacks, was spotted on the sidelines juggling a ball, looking as if the injury he sustained on Thursday night against AIK was not as bad as feared.

Jon Busch was placed in the shadows for the first half as the Quakes kicked off the memorable game; whereas Dan Kennedy, net minder for Chivas USA, was forced to look directly into the sun. Early on Laurent Courtois was making his presence known to the Quakes backline; however, he was no match for Steven Beitashour and Ramiro Corrales. In the 9th minute Casey Townsend sent a shot screaming towards Busch who made the save but the ball wasn’t fully cleared; having come back towards the net the ball luckily found Opara’s head and went out for Chivas USA’s first corner.

In the 10th minute, San José Earthquakes get their first chance when a throw in by Corrales found Chris Wondolowski who didn’t have enough time to get a shot off towards goal and instead played it back to Rafael Baca’s right foot who then shot it wide. Goats defender Heath Pearce picked up the match’s first yellow card in the 12th minute for a foul on burly forward Steven Lenhart.

The 20th minute saw Shea Salinas and Marvin Chavez switch flanks against Chivas USA which continued to lead San José with most of the possession.  Finally in the 27th minute, Salinas picked up the ball from a bad Chivas turnover and sent it back towards the box to a waiting Wondolowski whose golden left foot blasted it past Kennedy to the low far corner.

The Earthquakes were holding possession well following the goal and forcing a lot of turnovers in Chivas’ half.  In the 31st minute, Steven Beitashour was shown a yellow card for a reckless tackle. It was four minutes later when Rafael Baca nearly got a second goal for the Quakes by taking a shot at the top of the box and unluckily hitting the near post. The ball ricocheted off a San José player and over the end line for a goal kick.

The second half started with Opara being subbed out for Jason Hernandez and Chivas bringing in Ryan Smith for Micheal Lahoud. Jon Busch now faced the sun, but he was able to make an amazing save off a free kick from Juan Pablo Angel in the 49th minute.

Shea Salinas fought over the ball with ex-Earthquakes teammate James Riley and sent the ball into the penalty area where it deflected off a Chivas man to earn San José another corner kick. On the ensuing 52nd minute restart, Chavez sent the ball in where it was redirected by Corrales at the near post to an ever hungry Justin Morrow who headed it in from the back post. With the goal, San José doubled their lead to 2-0.

An unwelcome site for Quakes fans came ten minutes later, as Lenhart was taken down hard by a Chivas defender and is subbed off in the 63’ after gingerly holding his back. At the same time as Khari Stephenson came in for the ailing Lenhart, playmaker Tressor Moreno came on for Salinas.

In the 65th minute, Jason Hernandez stopped a Chivas USA counter with a great sliding tackle. Making a rare appearance in the preseason as he recovers from ankle surgery, It was good to see him back on the pitch healthy and saving the day.

More second half substitutions saw San José head coach Frank Yallop bring Sam Garza on in the 74th minute for Chavez and Sercan Güvenışık for Wondolowski in the 79th.

The 80th minute saw Ramiro Corrales near the end line pick out Colombian Tressor Moreno at the top of the box. The midfield maestro sent the ball to the near side corner of the goal for his first score as an Earthquake. A fourth goal came from Turkish forward Güvenışık, as he executed a give and go and sent the return ball low to the far corner in the 84th minute to make it 4-0. Finally, it was the Quakes’ 2012 first round MLS Super Draft pick Sam Garza’s turn to tally his first professional goal by taking a pass from Güvenışık and slotting the ball at a tight angle into the back of the net taking the score to 5-0 fin favor of the San José Earthquakes.

With the five goals today, the San José Earthquakes beat out the Portland Timbers to win the Portland Tournament on goal differential. Final standings were Quakes and Timbers with 5 points, AIK with 4 points and Chivas with 1 point.

The Earthquakes now make their way home to Santa Clara in order to prepare for first kick this Saturday at 7:30p against New England Revolution.