A crowd of about one hundred passed up Easter egg hunts and made their way to the Earthquakes Training Facility on the sunny spring morning to watch the San Jose Earthquakes reserve match against the Vancouver Whitecaps.  The Earthquakes fans were in an optimistic frame of mind after the previous day’s 3-1 comeback victory by the first team, and although they were entertained by a highly competitive game, they didn't find the victory they had hoped for.  The Vancouver Whitecaps second goal proved to be the winner, scored on a breakaway just one minute after Anthony Ampaipitakwong’s second half equalizer – with the final tally 2-1 in favor of the Whitecaps.

Early in the first half, Vancouver had the run of play, with two shots from outside the box denied at the crossbar: first Long Tan tried to open Vancouver’s account in the 10th minute with a right-footed shot from outside the box that rattled the crossbar, and just a minute later Atiba Harris challenged the outstretched fingertips of Earthquakes goalkeeper David Bingham, who only just tipped the shot over the goal.  In the first half hour, Whitecaps forward Omar Salgado also took good chances – one header over the goal and another shot wide.

Despite the continued pressure of the Whitecaps offense, the Earthquakes had the first clear cut opportunity of the game in the 30th minute, when a penalty kick was awarded to San Jose by four-time FIFA Women’s World Cup referee Kari Seitz - a handball by Whitecaps midfielder Bryce Alderson. Ellis McLoughlin lined up to take the shot, but unfortunately the Adidas PRIME ball rocketed so high over the cross bar it provoked the famous monster home run quote from Bull Durham  “Man that ball got outta here in a hurry - I mean anything that goes that far oughta have a damn stewardess on it don’t you think?”

As the first half progressed the Earthquakes began to apply a little more pressure up front - Cesar Diaz Pizarro’s shot challenged Whitecaps goalkeeper Brad Knighton at the near post, and McLoughlin crossed perfectly to Sam Garza, who eluded his defender effectively only to have his own shot saved by Knighton.  However, it was Vancouver who finally broke the deadlock in the 38th minute, when Harris capitalized on a turnover and crossed the ball in from the right wing servicing Tan who neatly slid the ball beneath Bingham for the first goal.

No substitutions were made as the second half kicked off, and the Earthquakes players seemed to justify coach Frank Yallop’s decision by rising to the occasion with more purpose and poise.  Rookies Josh Suggs and Sam Garza, together with Brazilian trialist Sullivan Silva, started to connect with forwards McLoughlin and Diaz Pizarro. Their breakthrough came in the 77th minute when Garza took the ball deep down the right wing, sent in a hard shot that the goal minder could only deflect into the left side of the six yard box, and where Anthony Ampaipitakwong pounced on and tucked away the ball past the kneeling Knighton for the equalizer. 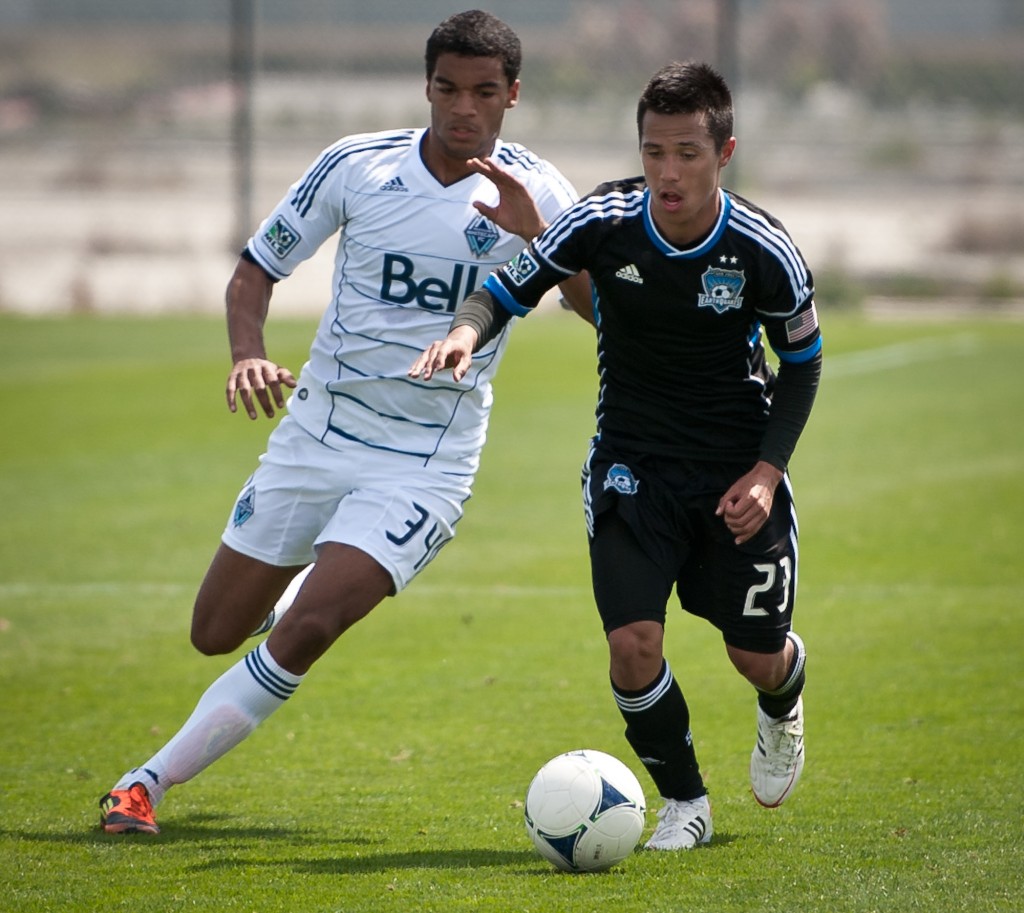 Disappointingly for the Quakes faithful, the level score line was fleeting - as is so often the case immediately after a goal, the Whitecaps cashed in on a momentary lapse in concentration - just a few seconds later Salgado took the ball down the left wing after the kick off, crossed it deftly into the six yard box where Harris headed the ball into the upper right corner, beyond the reach of the Earthquakes keeper.  To their credit, and despite this lapse in concentration, the Quakes youngsters continued to apply pressure, with Garza and Suggs tirelessly active down the right and left flanks respectively. The second half performance by the San Jose players was much more cohesive than the first, and their perseverance was demonstrated by their repeated vocal encouragement and determination that continued late into the game. In fact, by the end of the game San Jose out-shot Vancouver 20-13, including 12-4 in the second half, and yet came out on the short end of the 2-1 final score.

At the conclusion of the game, and despite the score line, Quakes fans remained cheerful - they took the opportunity to take pictures with some of the players who had participated or turned up to watch the game and welcomed back local resident and former Earthquakes goal keeper Joe Cannon.   First-time reserve game visitors were wide-eyed at their introduction to the reserve league, chattering excitedly about their experience in such close proximity to such a cleanly fought, yet highly entertaining game.

Two U-16 youngsters from the Earthquakes Youth Development Academy - Christian De Luna (#43) and Elisamo “Eli” Padilla (#29), were included on the roster for the game, fresh on the heels of their recent successes at the U.S. Soccer Training Center. However, the close game meant that they remained on the bench.

Josh Suggs returned to the San Jose reserve team after travelling back from Florida where he is on loan with the Tampa Bay Rowdies. Suggs impressed as he worked relentlessly down the left flank, and showed no signs of jet lag or tiredness in his legs.  After the game Josh expressed a little disappointment with his crosses and plans to work on that aspect of his game during his time in Tampa: "It's good - I'm not going to play over Ramiro - so I'm going to try and get as much experience as I can, and hopefully I'll develop.  I need to play in games, so I'm happy about that and I think it's what's best for the team".

After the game Coach Yallop was particularly happy to see the improvement in the team’s performance in the second half: "I thought we got back into the game to make it 1-1, but then they scored another one that kind of killed the game a bit for us.  I thought we played well in the second half though - a bit like last night - [this] first half wasn't the greatest but in the second half we deserved to get at least a point out of it".  On the crucial second goal he continued "We just got caught a little bit celebrating the goal, right from the kick off they go down and score - they guys have just got to learn from it".

The next Earthquakes reserve match is on the road at the LA Galaxy on Tuesday, May 8, with the next home fixture played at the Earthquakes Training Facility at 11 AM on Monday May 14.