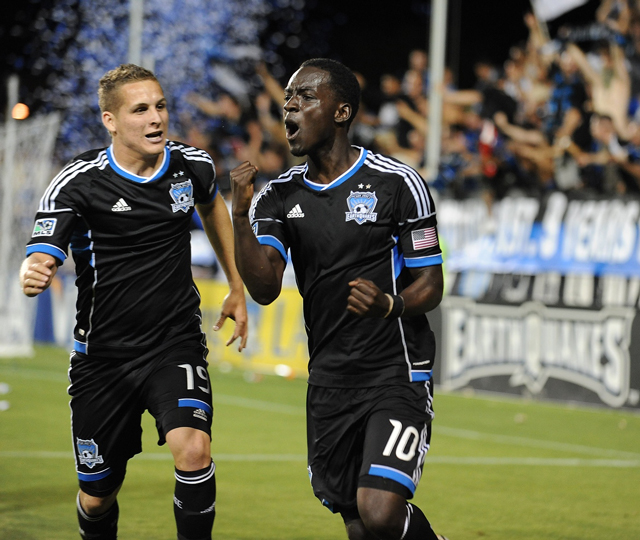 (Santa Clara, CA) With just seven games played this season, it might be a bit early to be looking at the standings, but then again, it’s never too early to be in first place. San Jose raised their overall record to 5-1-1 and climbed atop the MLS Western Division by beating a nine man Salt Lake side, 3-1, Saturday night at Buck Shaw Stadium.

Even with the two man advantage, the win didn’t come easily. The deciding goals were scored in second half stoppage time, as Simon Dawkins and Chris Wondolowski finally broke through a determined Salt Lake defense to earn all three points for the Earthquakes.

“The guys were great,” San Jose coach Frank Yallop said. “They were patient, didn’t get panicked, even in the last few minutes of the game. It was a very mature performance by us.”

This year’s roster is the deepest the Earthquakes have enjoyed since re-joining MLS. With four of last week’s starting eleven either injured or suspended, San Jose was able to fill those spots with players who would normally be considered starters: Ike Opara and Jason Hernandez in the middle of the back line, and Tressor Moreno and Simon Dawkins in midfield.

“The team had a lot of changes to the lineup tonight, but it didn’t stutter,” Yallop said. “We came out of the gate strong.”

Even before the red cards came into play, San Jose was doing a good job of keeping possession and moving the ball.  The Earthquakes had a couple early chances go wanting in the game’s opening half hour. At the 15 minute mark, Tressor Moreno's corner kick found Jason Hernandez unmarked at the far post, but Hernandez’s header was pounded into the ground and bounced high and wide.  In the 21st minute, a hustling Simon Dawkins stole a weak clearance pass from Nick Rimando and fed Khari Stephenson on the left side. From 18 yards out, Stephenson’s shot deflected first off defender Jamison Olave, then the near post. The rebound fell to Rafael Baca at top of the penalty area for a shot saved by the Salt Lake goalkeeper.

The Earthquakes were given a man advantage in the 29thminute when Fabian Espindola and Sam Cronin collided, sliding into each other on a 50-50 ball in midfield. Cronin took exception to Espindola’s studs up challenge, pushing the Salt Lake forward as the two got to their feet, and referee Elias Bazakos agreed, quickly going to his pocket for the red card.

San Jose pressed forward for the remainder of the opening period. After threatening the Salt Lake goal with a couple long range free kicks, Khari Stephenson finally broke through in first half stoppage time. The play started with Sam Cronin finding Steven Beitashour with room on the right wing. Beitashour’s cross reached Stephenson at the six for a snap header that bounced past Rimando for his first goal of the year.

Stephenson almost netted his second goal three minutes after intermission with a 30 yard drive that had Rimando stretching to his left to punch it away. In the 53rd minute, Chris Wondolowski’s diving header off a Tressor Moreno corner kick almost found the upper left corner of goal.

Salt Lake still had plenty of fight left in them, and against the run of play tied the match in the 53rd minute. Building out of midfield, Alvaro Saborio fed Kyle Beckerman coming up the inside left channel. Beckerman dribbled through the heart of the San Jose defense before rolling in a shot from 12 yards out.

Both coaches made some changes as the game entered its final half hour. Salt Lake brought Luis Gil in for Jonny Steele, while San Jose had Steve Lenhart replace Sam Cronin. Lenhart lined up alongside Wondolowski at forward, moving Stephenson back to midfield.

Then came Salt Lake’s second red card of the night. In the 69th minute, a long ball forward from Ike Opara sent Lenhart in on goal a step ahead of Jamison Olave. Olave pulled down Lenhart as the two raced into the penalty area, and the referee again went to his pocket.

“I think (Bazakos) is an inexperienced referee, from my point of view,” Salt Lake coach Jason Kries said. “I think it’s a difficult circumstance for him, and he struggled. I think we’ve taken the position in the league this year that we need to get some new talented referees and to do that you have to give guys like that an opportunity. My big hope is that this week the folks that do the teaching will be doing a lot of teaching with hm.”

Now playing 11 on 9, San Jose replaced a defender with another forward, as Alan Gordon came on for Ike Opara. Salt Lake responded by pulling midfielder Javier Morales in favor of defender Chris Schuler.

“It changes the game, obviously,” Yallop said. “But I thought (Salt Lake) defended great. It’s difficult to play against that, 8 guys behind the ball, in the box. You got to get some clear cut chances.”

2012 First round draft pick Sam Garza got his first MLS playing time, coming in for Rafael Baca in the 82nd minute, as San Jose searched for the game winner.

Last year, Quakes didn’t score in 116 minutes of having a man advantage, and as the game remained 1-1, the tense crowd let out a cheer when it was announced 6 minutes of stoppage time would be played.

The deciding goal came two minutes into that extra time when Steven Beitashour again found room on the right wing and centered for Simon Dawkins, who hit a lunging header that beat Rimando just inside the left upright.

The celebration was extended a minute later when Khari Stephenson lifted a pass for Chris Wondolowski, who buried a leaping header from six yards out for his league leading eighth goal this season (and 16th goal in his last 16 games, dating back to last year).

The win gave coach Frank Yallop his 100th MLS victory, but the San Jose manager said “I don’t put a lot into it. (The wins) get counted up and it ends up 100 wins. I just want to do well for this club. Hopefully I can get a few more and we can make the playoffs and everyone will be happy that’s involved with the club: the front office, the players, the coaching staff. It’s not just me. I’ve been helped along the way with good players, great staff and great support.”

The Earthquakes now travel to Philadelphia to take on the Union next Saturday at PPL Park.