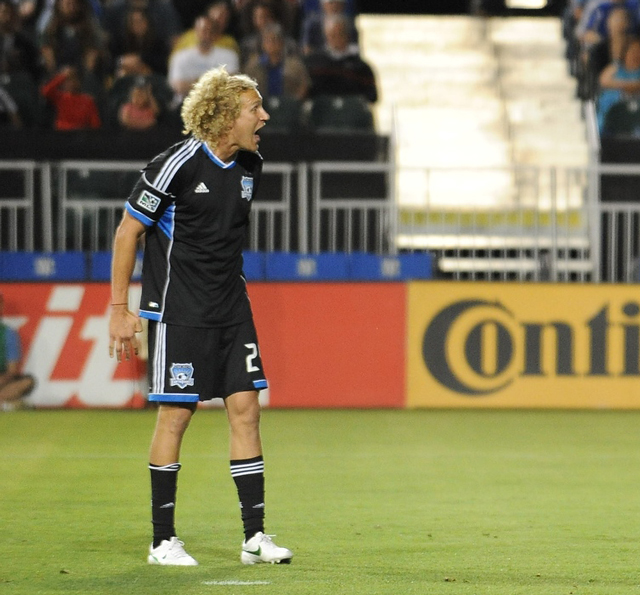 For the second straight weekend, the San Jose Earthquakes left it late to get the game winning goal, as this time around second half substitute Steven Lenhart provided the dramatics in securing a 2-1 victory at the Philadelphia Union. The goal deep in stoppage time was Lenhart’s second of the night, and offset a late Gabriel Gomez goal that looked destined to see both teams share the spoils. Instead, for the second time in the game, the big target forward sliced his way through the Union defense to score close range headers off crossing passes from midfielder Marvin Chavez.

“Marvin (Chavez) creates a spark whenever he is on the field,” shared Lenhart in his post game comments. “He is an exciting player to play with. He played me two great balls tonight and I was lucky enough to get my head on them. Sometimes the ball finds you and sometimes it doesn’t and tonight I was fortunate to get the goals.”

The 2-1 victory pushed the Earthquakes’ unbeaten streak to six games — five of them victories — and secured their place atop the MLS Western Conference standings for at least another week. Even more impressive was San Jose pushing their road record so far in the 2012 season to 3-0-1, with two of those victories coming in road trips to the Eastern time zone. Head coach Frank Yallop, who notched MLS career win no. 101 with the 2-1 result against the Union, could find little wrong with the play of his team on the night.

“I am very pleased with the performance,” said Yallop in his post game comments. “We didn’t give up after giving up the lead late and we kept going forward. Obviously, I am very happy for Steven (Lenhart) for getting the two goals. I think the difference in the game was the power of Steven and the pace of Marvin Chavez. They changed the game when they came on and we got a very good road win.”

The Earthquakes appeared to take the lead in the 89th minute, when an impressive effort from Lenhart to head a ball off the endline and back into the six-yard box was tapped home by defender Ike Opara. Unfortunately, and with very little explanation, Opara was ruled offside on the play, and the goal was overruled. Looking like they were destined to leave Philadelphia with a 1-1 draw, the team showed its resolve, and eventually found the game winner.

“We just have a team full of winners in here,” said Lenhart. “We kept fighting all the way to end even after they scored to tie it. Everyone in this locker room is working hard and we are finding ways to win games.”

Were it not for the tactical substitutions made by Yallop early in the second half, the Earthquakes may not have even been in a position to win the match. After an hour of soccer that saw San Jose put together some impressive possession and stifling defense, the team was still lacking in chances on goal. The Union looked content to pack it in through the middle of the field, and the Quakes could not break through their stubborn defensive formation. With the inclusion of Lenhart and Chavez together in the 60th minute, the dynamic of the game changed immediately.

“I felt that in the second half we needed to go win the game,” said Yallop. “If we sat back I think they might have gotten one on us. Sam (Cronin) and Tressor (Moreno) were playing well, but I thought we needed to shake it up a little bit. There was some space out there for Marvin (Chavez) when he came on and Steven (Lenhart) is a handful in the box. We were able to stretch them a bit more once they came on and we came out with three important points tonight.”

The Earthquakes return to Buck Shaw stadium this Wednesday night to face DC United, in what will be the second of three league games they will play during an eight day stretch. The two hottest teams in MLS will look to continue their unbeaten ways on Wednesday as San Jose will be looking to stretch their unbeaten streak to seven games while DC United will be looking to extend theirs to eight.