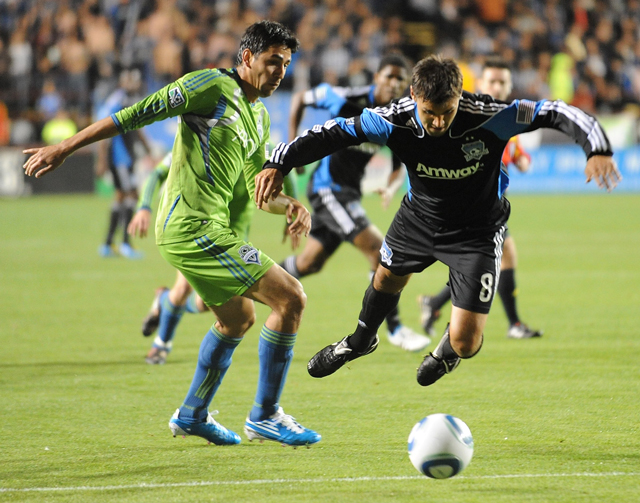 In what was billed as their first real test of the young 2012 MLS season, the San Jose Earthquakes held their ground against a very tough Seattle Sounders side to post a 1-0 victory at CenturyLink Field in Seattle. A 24th minute penalty kick conversion from Chris Wondolowski was all the Earthquakes needed to earn their second consecutive road win and their third win in the month of March.

The game’s lone goal came courtesy of a controversial penalty call in the 23rd minute following a collision between Earthquakes target forward Steven Lenhart and Sounders defender Marc Burch just inside the penalty area. Wondolowski calmly finished the spot kick to give San Jose the 1-0 lead and to raise his personal scoring account to four goals in the season’s first four games.

For Earthquakes head coach Frank Yallop, getting another road victory, especially against a difficult opponent like Seattle, was well earned by his side.

“Well, obviously a great result for our team and I’m very happy with the performance of our players,” said Yallop in his post game press conference. “It's a difficult place to play and get a result so we feel that we that we've played a good game. The game plan was to get at them as much as we could when they were pushing forward and I feel that we did a good job at that.” Yallop also added, “We deserved the points.”

The match was expected to be a hard-fought encounter between the two Heritage Cup combatants, and in only the 6th minute, the first yellow card was brandished on the night. Seattle midfield enforcer Osvaldo Alonso made an early statement with a chopping tackle on speedy Earthquakes winger Marvin Chavez just inside the center line. The caution would end up as one of six handed out by referee Mark Kadlecik throughout the game — three yellow cards awarded to each side.

Seattle had the first true scoring opportunity of the night courtesy of Fredy Montero in the 11th minute. Spying the forward streaking into the area, Alonso lofted a cross toward the penalty spot that Montero met after wrong-footing Steven Beitashour in an aerial challenge. His shot was good enough to beat goalkeeper Jon Busch, but the header went wide of the target.

The match soon was played in favor of the Earthquakes, and they almost broke through for the first goal in the 17th minute. Following a good sequence of possession by San Jose in the Seattle end, Rafael Baca found Beitashour with wide ball that took the Earthquakes defender into the area. He sent a hard cross through the six-yard box that Lenhart met at the far post for the shot attempt. Sounders goalkeeper Michael Gspurning made the save on the tight angle shot, but spilled the ball into the path of Wondolowski. However, with little space to get off his shot, Sounders defender Patrick Ianni slid into the path of the ball, and helped guide it into the receiving hands of Gspurning.

The next good opportunity for the Earthquakes came in the 23rd minute and resulted in the penalty call that gave the visitors the lead. As an initial cross into the area toward Lenhart went through a tangle of bodies and ultimately to the far side to Chavez, the Earthquakes striker put an elbow to Sounders defender Burch’s back that sent him to the turf. As the play continued, Lenhart initiated some minor contact with the defender, But Burch seemingly lashed out at the forward with a right elbow that sent Lenhart sprawling to the ground. The referee didn’t hesitate in his call, and the Sounders were left wondering just what had happened.

For Wondolowski, netting the penalty kick was as simple as blasting a low shot inside the right goal post and away from the wrong-footed Gspurning. And despite the howls of protest from fans throughout CenturyLink Field, the Earthquakes celebrated a 24th minute 1-0 lead.

“It's a shot from 12 yards away,” described Wondolowski. “I'm a forward, I should make it and it doesn't matter what keeper is in there. Anytime I take a PK I play to myself and try to stay away from playing the keeper as much as possible. He's a big guy and it's a bit intimidating, I always try to put my laces through it and put it in a corner.”

The Earthquakes continued to play with the advantage of momentum, and nearly found a second goal on two occasions over the next ten minutes. In the 28th minute, Baca elected to pass the ball from the top of the area back to Sam Cronin. The defensive midfielder surveyed the situation before sliding a perfectly weighted pass to Wondolowski, but his shot from 15 yards out was rushed and right at the ‘keeper. In the 33rd minute, a long aerial pass to Lenhart near the left touchline was expertly controlled and then distributed to Chavez tucking into the center of the midfield. The Honduran directed the ball to an open Salinas coming down the left, but his shot from a tight angle found only the side netting. The scoring attempt was almost a carbon-copy of Salinas’ miss late in the loss to the Houston Dynamo, and just as was the case then, electing instead to cut the ball back into the area may have borne better results.

The second half saw a resurgent effort from the Sounders, and much like the Earthquakes last visit to CenturyLink Field near the tail end of the 2011 season, the home side looked potent enough to find an equalizing goal. However, this was not 2011, and the Earthquakes instead played with much more resolve in the defensive third.

“We said we needed to get better at seeing games out and defending as a unit,” said coach Yallop. “I think Victor Bernardez has made a big difference on the back line. Jon Busch, you can go on and on about him, but the team was determined not to give goals up. Seattle was going to be right up there to the end and I think we went toe-to-toe with them tonight.”

In the 70th minute, it appeared that the Sounders would open their scoring account through a long set piece opportunity from the left sideline. Midfielder Alvaro Fernandez, perhaps sensing that the Earthquakes defense was not set, was quick to send a floating free kick into the area. Montero made the most of limited space and redirected the ball toward the far post. However, with veteran instinct, Busch parried the ball away, and regained his footing just in time to collect a follow-up attempt from Zach Scott. The double save from Busch preserved the 1-0 lead for the Earthquakes, but the effort from the ‘keeper was merely a prelude to a more fantastic save posted late in the match.

In the 84th minute, with the Earthquakes settling into a more defensive formation in an effort to see out the game, Montero again made San Jose supporters’ hearts skip a beat. With space just at the top of the area, Montero blasted a left footed shot that seemed destined to curl just inside the left goal post. But there was Busch again, this time spearing the ball with an aerial save that earned the Earthquakes ‘keeper Man of the Match honors. Seattle would get no closer to finding an equalizing goal, and through the complete team effort, the Earthquakes posted their second Wondo-nothing victory of 2012. Despite being the only goal scorer of the night, Wondolowski was quick to give credit to the victory to Busch and the defense.

“It's unreal,” said Wondolowski in his post game comments. “Busch commands things back there and he did a great job with a couple great saves. You have Bernardez winning almost every head ball and Jason [Hernandez] coming in at center back. Credit to all of our defenders, it's a pleasure to play with them and I'm proud to be apart of it.”

For hero on the night Busch, it was just another performance like he expects of himself in every game.

“You know what, we go about our business,” said Busch, deflecting attention away from his own exploits. “We talked about it in the preseason. We're here for one job. There are 34 games in the season and then the playoffs. We aren't getting carried away and we need to keep moving forward. It's a big win and we're going to enjoy it.”

The Earthquakes return to action this Saturday in a home match against fellow MLS Western Conference surprise side Vancouver Whitecaps FC. With a win at Buck Shaw Stadium, San Jose has a chance to surpass their best start to a season since returning to MLS in 2008.