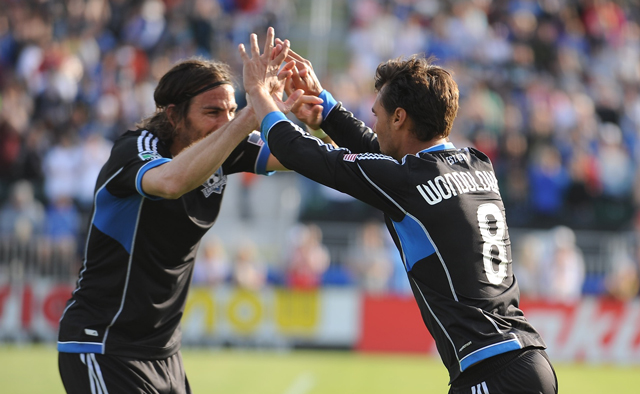 It was a bright, sunny afternoon at Buck Shaw stadium where two defensive teams decided to see who deserves a top spot in the west in front of San Jose’s eighth consecutive sellout crowd of 10,525. The Vancouver Whitecaps came into Saturday’s match with ex-Earthquakes goalkeeper Joe Cannon in net, having yet to allow a goal all year and trying to crush the 2007 record set by the New York Red Bulls of 421 consecutive shutout minutes to open a season.

Across the pitch, stood 5’10” Jon Busch who could claim that he hadn’t allowed a goal during run of play this 2012 season, with the only goal coming off Houston’s Brad Davis penalty kick. While the Quakes had come through with three victories out of four, making this their best start to a season since 2002, Vancouver were boasting that they were the only Western Conference team yet to lose a game this year.

Per Whitecaps’ defender Jay DeMerit, he only found out on Friday that pesky forward Steven Lenhart wouldn’t be on the pitch due to a hamstring injury suffered during Thursday morning’s training session. The US Men’s National said, “We did a lot of prep this week with the way San Jose plays with Lenhart in the formation. But anytime you lose a key guy that gives you more confidence to go and play. So we were excited at the opportunity that we had, but unfortunately we grasped it for awhile but didn’t win it in the end.”

While on the other end of Vancouver’s line up, Sebastian Le Toux admitted that he hadn’t really heard of San Jose’s brute Victor Bernardez except for that “he is a good defender, sure and strong”. The French forward said that he didn’t really know what to expect so he decided to “just play my game and not worry about him”.

Whereas Vancouver didn’t know too much information on the new Earthquakes lineup, Shea Salinas was able to give some pointers to his teammates about how to deal with a few of his ex-teammates.  Per the speedy winger, DeMerit is “great in the air, very physical for 50-50 balls so our tactic was to send the balls in low just at his feet, which worked in the second half where we were able to get in behind him a bit. And almost scored two goals off low crosses.”

The Earthquakes played very flat throughout the first half and into the second half. With Quakes’ Coach Frank Yallop admitting that, “If Alan Gordon was fully fit, he would have started. He’s a big presence and holds the ball well.” However, without either big target forward, that left Tottenham Hotspur loanee Simon Dawkins to make his first start this year and play up top with Chris Wondolowski. Wondo admitted that, “I was the target forward to begin with and I was doing a horrible job at holding the ball for us and thus giving away possession.”

Yallop had to go to his bench in the 38th minute when Marvin Chavez could no longer continue on a sprained right ankle seemingly suffered in the 10th minute. This allowed attacking midfielder Tressor Moreno to come in and push Rafael Baca out to the right flank.

The biggest scare of first half for the Earthquakes had to be when Eric Hassli passed the ball back to John Thorrington with Jon Busch venturing off his line. Thorrington’s simple chip shot sailed over the Quakes’ ‘keeper, but failed to dip low enough to clear the crossbar. The ball caromed back into the area where it rebounded directly to a waiting Davide Chiumiento. The Whitecaps playmaker tried to shoot toward goal, but instead hit Bernardez in the lower gut, and watched helplessly as the ball ricocheted into Buschy’s open, waiting arms. The Honduran defender stayed down for a long time but was able to come back into the game after regaining his composure on the sideline.

During half time, Yallop said to the team that he wanted to pick up the pace, not looking for more effort but pace and speed to test Joe Cannon. During the first 15 minutes of the second half, it didn’t seem that the Quakes would respond especially after what happened in the 48th minute.

Steven Beitashour played the ball out on the sideline. Vancouver defender Jordan Harvey looked to throw the ball to Le Toux (Shea Salinas is marking Harvey, Bernardez was on Le Toux, Justin Morrow was on Eric Hassli) who just let it bounce over to Hassli. Big Vic turned and lost Le Toux while looking to play ball the more menacing Frenchman forward. None of the other Quakes were tracking with Le Toux who had got himself open in time for Hassli to pass him back the ball where he put a one touch shot past Busch at the far post. Le Toux commented after the match that, “It was good to give the lead to the team. Then Wondo came back and scored so it was a bit disappointing. But it is always nice to score for sure.”

In the 52nd minute, Simon Dawkins was substituted out and forward Alan Gordon made his way on the pitch for the Earthquakes. Now with a big target guy up at top, Jay DeMerit had to focus on him, leaving Wondo to be more recessed and marked only by Harvey.

Six minutes later, Thorrington was seemingly taken down in the box by a zealous Beitashour and yet referee Ramon Hernandez decided not to call for a penalty. It was noted that Hernandez seemed to pulled out his whistle and was going to point to the spot but for some reason changed his mind, much to the relief of Quakes fans everywhere. And then in the 62th minute, by the grace of a few steps Bernardez took out of the penalty area, the defender was called for a handball, but avoided a red card and another potential PK for Vancouver.

And then the San Jose Earthquakes finally woke up and played the exciting ball that we were all coming to expect. Hope increased when Salinas’ cross from deep in the right corner barely missed Gordon’s outstretched left foot in the 64th minute. Followed four minutes later by Ramiro Corrales throwing in a ball towards a waiting Wondo who kept to his feet making his way towards goal, while shielding the ball from Jay Demerit. Joe Cannon came off his line and sprawled out in order to make himself wide. Per Wondolowski, “Joe knows me and knows that I like to put my laces through the ball, so I tried to lift it a bit and put it over him.”

Next in the 70th min Salinas put the ball low across the front of the net barely missing the three waiting Quakes: Gordon had a small touch, Wondo got a toe on it which directed the ball a wee bit away from Bernardez who was sliding in towards goal just missing the ball.

Two minutes later Ramiro threw the ball into play which was cleared out to a waiting Khari Stephenson who passed the ball back to Rams who then crossed it to a flying Alan Gordon who headed the ball into the back of the net. The forward said, “I was looking to be dangerous, I was looking to be busy in the box. I saw Ramiro coming down the end and I made a hard run to the far post as he was running out and I knew he would be near. I just got a good head on it and I was lucky it went into the back of the net.”

Camillo fouled Corrales in 78th minute causing a free kick which Moreno took and crossed the ball deftly to wondo’s waiting right foot that with one touch puts it to the far post past Cannon to make the score 3-1. Joe Cannon said after the game, “Two times we gave Chris the opportunities and Chris is a guy who is very opportunistic. He is very streaky and right now he is hitting good form like he normally does a couple of times a season. Chris is a good player but we just can’t give him those opportunities.”   Whereas Tressor Moreno accredits the goal to the fact that “Gordon had good movement. He made a run that left Wondolowski open so he could finish.”