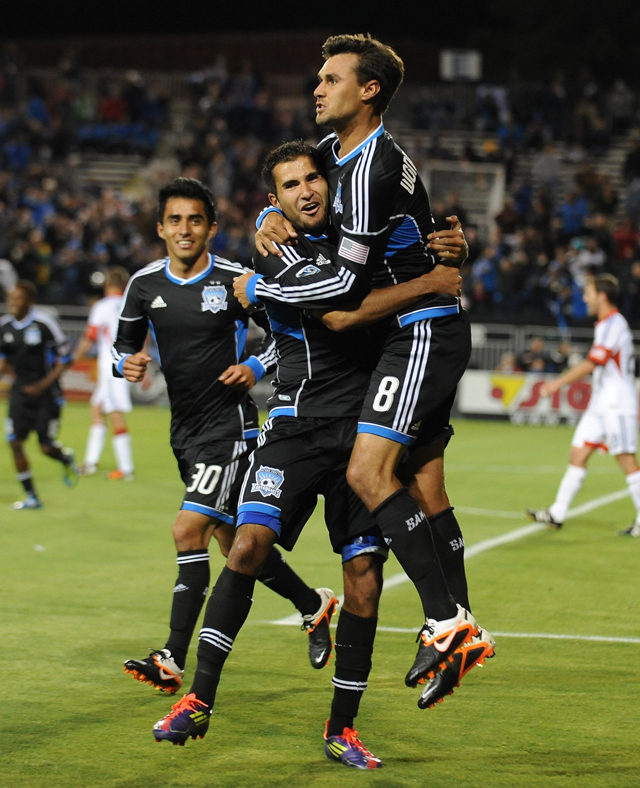 It was a record-book night at Buck Shaw Stadium on Wednesday night. For the 8,734 in attendance, the home side set a Buck Shaw record for goals by a team in a game. Chris Wondolowski and Steven Lenhart both scored a brace – Justin Morrow had the other goal – sending the fans home happy with a San Jose 5-3 drubbing over a strong DC United club from the Eastern Conference.

San Jose improved to 7-1-1 on the season, holding 22 points and a firm grasp of the top spot in the Western Conference in the early stages of the 2012 season. United fell to 4-3-3 after the loss, 15 points and still holding onto second in the East. San Jose next travels to Vancouver to take on the Whitecaps Saturday while DC also heads north of the border, taking on Toronto FC in Toronto on Saturday.

Here’s what some of the particulars were saying in the locker room after the match.

DC United coach Ben Olsen -- “I don’t think we had enough of a chip on our shoulder and I think they did … they create a lot of problems with how many numbers they throw at you and it makes it difficult. Early (in the match), they were sharper than us … Second half I was proud of the guys how they fought and how they came back … overall I’m disappointed with the loss but there’s a lot of fight in this team and when we get healthy we’re going to be alright.”

Earthquakes coach Frank Yallop -- “All the things I really wanted to do well (tonight), we did great. We conceded three goals, but again, we won by two. We haven’t done anything yet, we’ve had a great start to our season, we have a long way to go, but I feel that team is relishing each game they play … this team has spirit and fight, and the squad is in a good place; they like each other, they work for each other and want to win for each other. It’s a joy to work together.

Earthquakes defender Justin Morrow -- “We’re growing as a team each game. Our front six knows each other very well and I think that’s showing on the field … This is one of the most fun teams I’ve played with.”

Earthquakes forward Chris Wondolowski -- “Lenhart has been man of the match the last two games. The work he has done has made my job a lot easier … Our mentality has changed (this season), but we’re a great team top to bottom … In this locker room, we have something special. We know it, we recognize it, but it can’t just be talked about, we have to go out there and do it, and that’s our goal.”

Earthquakes forward Steven Lenhart -- “It’s good to help the team and it’s fun to score goals …Everybody is committed to each other and seeing the game out. We’ve only lost one game, but the commitment of everyone on this team, we know over the course of 90 minutes, we’re going to be the winning team.”

Earthquakes goalkeeper Jon Busch -- “We’re very dangerous going forward, we have so many weapons … We’re not concerned about the run, we’re just concerned with each game … Yes we won, but we have got a lot to work on, there’s no time to dwell on this one … At the end of the game, we weren’t good enough. We didn’t kill the game off like we have so far this season … we won, which is awesome, but we can’t get into shootouts like that every game. We have to tighten it up a little.”

San Jose was in control in the early going, but it was the road United that got on top first. In the eighth minute Tressor Moreno turned the ball over for the Quakes at midfield and it resulted in the first goal of the match. Danny Cruz took the ball and sprinted down the center of the pitch before cutting to his left. Khari Stephenson tripped up Cruz, but the ball rolled to space for Dwayne De Rosario to run onto and slot past Jon Busch into the upper right of the goal for an early 1-0 lead.

“I wasn’t that worried,” said Yallop. “I felt we were going to get on the score sheet more than one goal tonight for sure.”

If not for a steady Busch just two minutes later, the United could have doubled its lead when Maicon Santos buried a free kick. Busch corralled it to keep it a one-goal difference.

Steven Lenhart was inches away from equalizing the match in the 13th minute. Marvin Chavez lofted a corner perfectly into Lenhart’s space. The veteran got a head on it, beating Joe Willis but grazing the crossbar and going out of play.

Despite dominating the run of play, the Quakes weren’t able to capitalize on their chances. That all changed in the 19th minute when Lenhart drilled home his third goal of the season. Moreno bullied his way into the box before having a shot blocked. It went out to Lenhart who scorched it home from 25 yards out.

Just two minutes later, the Quakes leading scorer put the home side on top 2-1 in the 21st minute. Wondolowski was on the receiving end of a pass by Simon Dawkins where all he had to do was slip a shot past Willis from less than 10 yards out to notch his league-leading ninth goal (tied with Thierry Henry of New York). Moreno found Dawkins open on the left of the box to account for his second assist of the match.

Busch didn’t have to make many saves in the early going for the Quakes. When DC pressured in the 27th minute, he was able to keep the Quakes on top after saving a flicked header off a long throw from the left flank. Initially Busch bobbled the header before pouncing on the loose ball.

It was just not DC United’s night. In the 31st minute, Justin Morrow put in his first of the season. San Jose sent in a corner that went over everyone and found its way to the back of the box where Morrow first-timed a shot that deflected off a DC defender and into the upper netting for a 3-1 lead.

As good as the Quakes offense looked for the majority of the first half, the highlight of the first 45 definitely came in the 35th minute when Busch made, without question, an MLS Save of the Week caliber stop on De Rosario. It could have been an MLS Goal of the Week had Busch not ruined it for De Rosario, who bicycled a shot looking for the far side netting. Busch laid out to keep that from happening and keep the Quakes up a pair.

“That save was a game changer right there,” said Wondolowski.

San Jose took that 3-1 lead into the half. Stats from the half didn’t indicate the utter domination the Quakes had. DC out shot San Jose 10-8 with both teams putting four on target. San Jose earned three corners while DC only took one. Each team committed four fouls, with only Cruz being ticketed with a caution. San Jose had a little bit more of possession, holding the ball 53.7 percent of the time to DC’s 46.3. In the end, the score was the most lopsided numbers of the stats.

San Jose came out a tad on the lackadaisical side to open up the second half, with DC the clear aggressor. A shoulder tackle by Daniel Woolard on Chavez, knocking the Quakes midfielder to the ground – legally – in the 50th minute showed what tone DC was hoping to set. That said, Chavez shrugged off the dirt and retained possession of the ball moments later, befuddling Woolard with a couple moves, knocking down his defensive psyche, presumably, in the process.

Physicality was the name of the game in the second half. Dawkins got into the act, earning a yellow card after getting a little wild on a 50-50 chance. DC couldn’t make anything happen on the free kick opportunity.

It was obvious that DC was still determined to make a game of it. Woolard made his presence known in the early stages of the half and resurfaced in the 65th minute when he sent a header past Busch for his first goal of the season. Andy Najar lofted a cross across the box and Woolard laid out to head it in to make it a 3-2 game.

Mere moments after the ball was kicked off after Woolard’s goal, the Quakes nearly matched that. Steven Beitashour sent a long ball to Lenhart who got behind the United defense and was one on one with the keeper. The striker was unsure of whether to pick a corner or loft it over Willis and ultimately kicked it right into his stomach for an easy stop.

However, Beitashour was able to set up a teammate for a goal just four minutes later. In the 69th minute, San Jose answered DC’s goal when Wondolowski headed home his second of the game and 10th of the year, putting him in sole possession of the lead in goals in MLS. Beitashour lofted a ball to the center of the box where Wondolowski leaped over everyone and contorted his body to direct his shot on goal. Willis got a hand on it, but the power of the header pushed it past him and into the top of the goal for a 4-2 Quakes lead.

“I’ll take 10 for the whole year as long as I can raise the cup,” said Wondolowski. “If I’m able to score some goals along the way, I’ll take it but that’s the main goal right now.”

Already having a season high in goals, the Earthquakes added a fifth in the 74th minute. Chavez blasted a shot from outside the box that rung off the woodwork behind Willis. The carom went directly into Lenhart’s lap where he pushed home his fourth goal of the season, second of the night, making it 5-2.

“That’s Lenny,” said Yallop. “He never gives up, he’s always constantly on the move, making sure he’s a handful for anyone he plays against; he’s scored four goals in two games.”

DC didn’t pack it up entirely. In the 81st minute, after missing out on a corner opportunity a minute prior, Chris Pontius got in the San Jose box and freed himself for a shot, looking to trim the lead. His attempt, however, sailed high of the target.

Meanwhile, the Quakes didn’t take their foot off the pedal, pressing forward as only Chavez can do. In the 85th minute, the midfielder broke down his defender just outside the right of the box and sent a through ball looking for second-half sub Rafael Baca whose attempt went wide.

As the Quakes seemed to tighten up on the defensive end, DC responded and pressed forward for a third goal in the 88th minute. Hamdi Salihi tapped home a ball at the top of the six yard box, beating Busch high, and making the score a more respectable margin at 5-3. They were able to pressure the San Jose defensive third some more in the latter stages, but the Quakes defense continually sent the ball away.

In stoppage time, San Jose knocked the ball around and held possession – as well as taking a free kick – until the final whistle blew to give them their sixth win in seven matches, and seventh consecutive match without a loss.