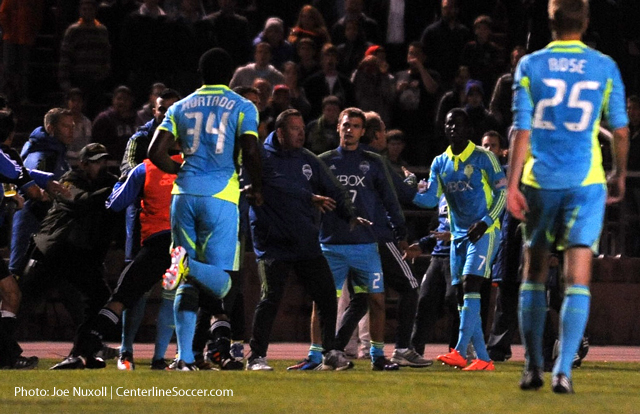 (San Francisco, CA) An already tense U.S. Open Cup match between the San Jose Earthquakes and Seattle Sounders kicked into overdrive when the referee signaled full time and players from both sides reacted to the 1-0 result to the Sounders. A number of Earthquakes players converged on referee Yader Reyes to protest what they felt were a number of missed calls that could have brought them back into the game. The Sounders rejoiced at the result and their advancement to the semifinal round of the tournament.

However, closer to the touchline, where members of both benches by proximity couldn’t help but interact at the close of the match, Seattle forward Eddie Johnson strode confidently toward the San Jose bench to celebrate the victory. His actions were taken as provocation, and unused substitute Jed Zayner approached the Sounders forward in protestation. What happened next, in the words of Zayner was like nothing he had ever seen in his professional career.

“Eddie Johnson was taunting us in front of our bench and celebrating and saying obscenities to our fans,” stated Zayner in the locker room after receiving treatment from trainers, “I just walked up to him and said ‘Eddie, if you want to celebrate, go celebrate in front of your own bench.’ And he hit me in my face.”

When asked to elaborate on the incident, Zayner gestured as to the contact he experienced and provided more detail on what he recalled just how Johnson hit him.

“With his left hand, closed fist, in my eye,” said Zayner as he pointed to his right eye. “I wasn’t looking for a fight. I’ve never gotten into a fight on the field. To have a guy who’s played for the national team and is supposedly a professional celebrate in front of our bench, which is wrong, and then to hit me. It’s unbelievable.”

While Zayner made himself available for questioning on the incident, Johnson was not available for comment after the game. Sounders head coach Sigi Schmid, in comments to The Seattle Times could only say “It was a bad way to end the game.” Footage from the San Jose Earthquakes streaming coverage of the match is not clear on how the incident unfolded, but it definitely shows contact between the two players.

As seen in the video, \the incident between Zayner and Johnson did not go unnoticed by the Earthquakes coaches and players that had now made their way onto the field. And while Earthquakes head coach Frank Yallop, who was immersed in the thicket of jostling players, was unwilling to discuss the affair, forward Chris Wondolowski did come to the defense of his teammate.

“At the end, one of their guys took a cheap shot at Jed Zayner and it escalated from there,” said Wondolowski of Johnson. “He was celebrating in front of our bench and yelling at our fans. Jed told him to go do it over on his side, and he took a swing and hit Jed in his eye.”

Zayner, for the most part seemed more surprised than anything when it came to the confrontation. He recognized that sometimes the intensity of a match can lead to unnecessary physical altercations, but stressed that coming from Johnson, he was caught off guard.

“Stuff can happen like that, but somebody’s never outright swung and hit me in the face,” said Zayner, who then shared that he does not have a history with Johnson that might have served as provocation for either side. “No, I don’t know the guy, no interactions with him at all. Not friends with him, not enemies. That’s it, it’s unbelievable.”