The completely biased San Jose Earthquakes fan Nerdy Gales wonders why Big Vic's goal didn’t make him smile, whether it was a hangover that dampened players' and fans’ spirits in Portland, and forecasts the result of the Quakes upcoming road game in Dallas.

Tickets for the second California Clasico of the season at Stanford had sold out a week before the game, so I knew the atmosphere in the 50,000 seat stadium would be electric.  Even so, I wasn’t prepared for the volume of the swirling crowd noise propelled by the 1906 Ultras, and somehow I missed the news that there would be a fighter jet flyover during the national anthem – the two jets' arrival was perfectly timed, but I jumped a mile with the breathtaking roar of their engines.  The game got off to a good start for the San Jose with Lenhart’s goal and celebratory chin-ups on the goal bar seven minutes in – he’s such a refreshing personality (was it the gum from his open mouth on Wondo's nose in Joe Nuxoll's team photograph?).  I finally got to see one of Beckham’s trademark free kick shots in person, when he bent it like only he can for the equalizer, and I’ll admit to a begrudging respect for this Galaxative as the former captain of my native land’s national team.  The remainder of the first half saw some uncharacteristic defensive errors from the Earthquakes back  line – an own goal by Jason Hernandez, and another error quickly exploited by Landon Donovan for the Galaxy's third goal.  Fortunately, it only took another three minutes for Big Vic Bernardez to peg back one of LA's goals, his first in MLS – you would never know as his facial expression didn’t change one iota; any celebration was displayed by intensifying his game face from the 'grimace' to 'menace' setting. 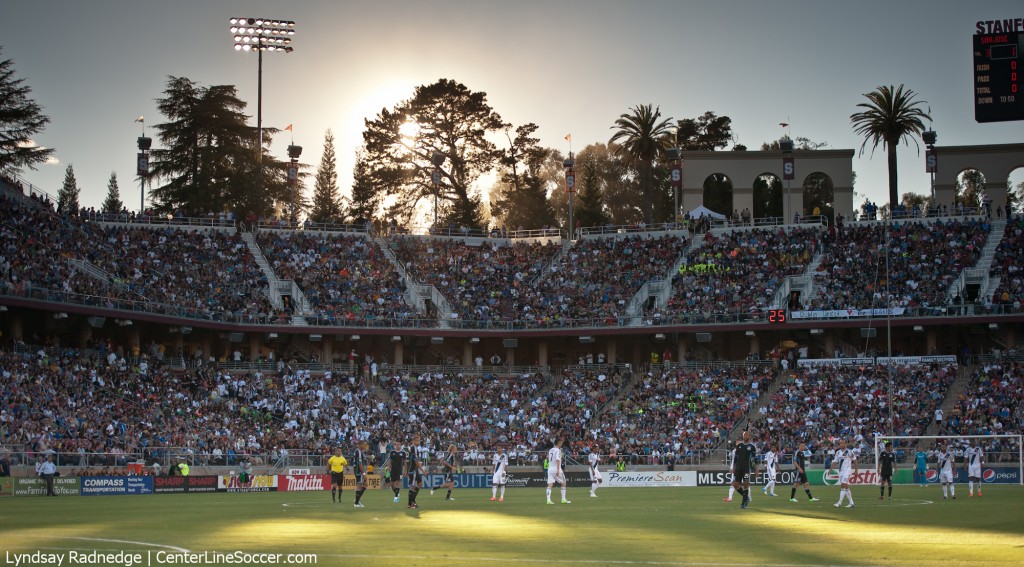 With the score line at 3-2, the Quakes players looked pensive as they walked into the dressing room at half time, with the exception of Steven Lenhart, who was provoking chuckles from David Beckham.  Every player's demeanor was intense as the second half got underway, and increased visibly in the Quakes players when Cronin slid in an early second half equalizer - by now, fans were confident that the Goonie magic would surely result in a Quakes victory.  The stadium cheers grew ever stronger, victory songs were sung and the atmosphere ratcheted up one louder to eleven – if you weren’t standing by then, you were on the edge of your seat.  When Wondo flicked in the winning goal, we all jumped up higher than the T-38 flyover.  Wondo's eyes were bulging wide as he clenched his fists, pumped them in the air then turned to the Ultras and kissed the Quakes badge on his shirt.  As this season has gone, so went the game: the Earthquakes held on and Magic Wondo was Goonie of the week. After his post match TV interview, Wondo ran to the welcoming arms of the Ultras and was smothered with pats on the back, more fist pumps and screaming voices of congratulation.  Finally, to cap off the perfect evening with a bang, the pyrotechnics after the game matched the wonderful display of fireworks we’d seen on the field. 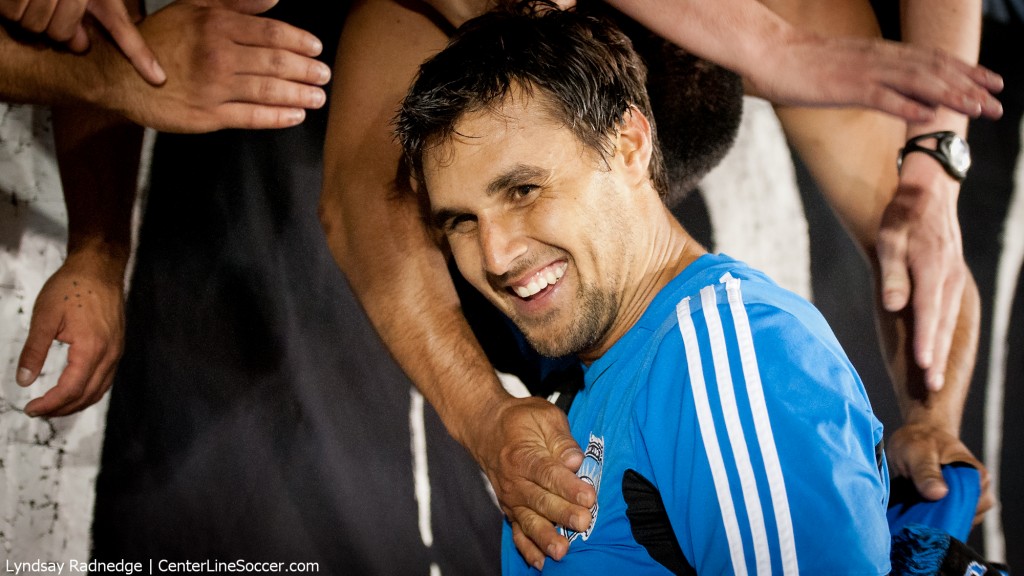 Only three short days later, the Quakes’ Portland trip got off to a bad start when, for the second time this season, the team’s flight was canceled, disrupting a few dinner plans – after nine points in three games, I failed to register this as a bad omen.  My own exit from work on Independence Eve was later than expected and finally began when I settled back on the couch with a cold brew and hastily acquired take out just in time for the 7:30 kick off.  I gradually relaxed into a postprandial stupor, just as the Quakes fast start was fizzling out – after a good first ten minutes they quickly seemed to tire, perhaps hung-over after the excitement of the LA game.  After the enormity of the fireworks at Stanford, my small screen showed a game that was far from a damp squib, but failed to deliver the now traditional Goonie magic.  The Timber’s two goals earned Timber Joey log slices for Mwanga and Jewsbury who, I was surprised to learn, hadn’t scored all season – naturally, I would rather they’d have waited to start their coffee table collection.  Even though our ever-reliable Flash Gordon pegged one back, the score finished 2-1, and the road defeat snapped Quakes fan Stuart Berman’s winning streak of wins after road trips to Colorado and Salt Lake; in Portland he surreptitiously became a 'fan of mystery' and blended in with the Timbers Army.

My own plans for this Saturday will be to take in an afternoon San Francisco Stompers game at Kezar Stadium that will finish just in time to make it over to the pub for beer, pies and the Quakes road game at FC Dallas.  Once again it’s a short turnaround time for the Earthquakes squad that flies out Friday for their sixth game in eighteen days.  FC Dallas is coming off a 1-1 tie against Toronto FC, where they got off to a flying start with a fifth minute goal from Zach Loyd’s header, only to make several defensive blunders to allow Koeverman’s  equalizer later in the first half. 2010 MLS MVP David Ferreira is back in the mix for FC Dallas after making his first appearance since suffering a broken ankle back in April of 2011; reportedly he worked productively with Brek Shea when he came on as a sub last week.  Ferreira’s return to the lineup, of course, might prevent San Jose fans from seeing former Quake Scott Sealy (the one, the only).  Any disappointment among the 1906 Ultras will be ameliorated by the knowledge that the swap of Sealy for Quakes midfielder Marvin Chavez (who will be returning to FC Dallas for the first time) means the Earthquakes got the better half of that exchange, acquiring both speed and accuracy.  Hopefully, with kick off at 8PM local time, temperatures will have cooled from the hotter-than-a-Roman-candle 98 degrees predicted for Frisco, TX.  FC Dallas’s statistics (3-9-6) add up to a Quakes (11-4-3) victory, and with Ferreira still finding his feet, his return probably won’t be enough to revive their fortunes and break their twelve game winless streak.  While Tressor Moreno was set to return to Santiago Wanderers, the Quakes have Jon Busch back in goal and the indomitable Magic Wondo named player of the month for June with his three game winners, including the all-important AT&T Goal of the Week against LA.  If the team keeps its cool, the Earthquakes should rebound from the Portland fizzle to Texas fizz and win this game before returning home next Saturday, July 14th for a few refreshing root beer floats.