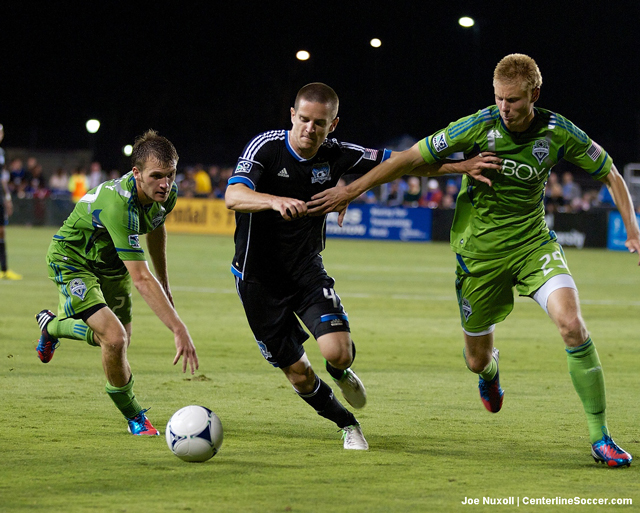 As the last remaining players left the field and returned to the San Jose Earthquakes locker room following Saturday’s dramatic victory over the Seattle Sounders, a crowd of reporters had gathered around Steven Lenhart to hear from the stoppage time goal scoring hero how he yet again led the team to victory.

A few feet away, in an adjacent locker, Sam Cronin maneuvered the crush of reporters encircling Lenhart and methodically went about his business of getting ready to head home after another workmanlike shift in central midfield. Following his name on the official scoresheet was a string of zeros, but Cronin was arguably as important in helping the Earthquakes earn three points over the Sounders as the match winning goal scorer standing just to his right.

After San Jose had finally broken through to score the game’s first goal through Simon Dawkins, the Sounders renewed efforts on offense gradually increased the pressure on the Earthquakes back line. In the 81st minute, their ears pinned back, Seattle may a foray into the area that looked certain to earn the equalizer.

Osvaldo Alonso, as equally impressive a defensive central midfielder in MLS as Cronin, survived the field and made a pass to Alex Caskey making a run toward the top of the area. Caskey drew the attention of the San Jose center backs and calmly slipped the ball to Brad Evans in stride entering the area. As Evans prepared to unleash an uncontested right-footed shot at Jon Busch, and the crowd at Buck Shaw Stadium gasped at the perceived inevitability of the Seattle opportunity, Cronin did what Cronin does.

With impeccable timing no less dramatic than Lenhart’s effort on the game winning goal, Cronin went to ground with legs outstretched to deflect the ball to safety with his right leg. At full speed he slid across the Buck Shaw turf with the kind of self-sacrificial play that is a hallmark of this Earthquakes squad. Cronin was not going to let himself or his team down in that situation.

“We’ve got all eleven guys on the field working hard,” Cronin told Centerline Soccer. “So if you have a chance to make a play like that, you can’t let the other guys down. You’ve got to be there to step up and do your part.”

The statistics don’t mention the play at all, but with the Sounders calling in the offensive reinforcements as the second half wore on, keeping the score at 1-0 was critical to what transpired later in the game. And to do that required the kind of all-hands-on-deck defending that has become expected from San Jose.

Though the will and mentality to prevent any holes in the back four and close out the clean sheet was breached when Fredy Montero scored in a goal-mouth scramble at the start of stoppage time — Cronin commented: “We were disappointed to give up that goal, and I’ve got to handle that ball better” — coming back seconds later through Lenhart’s goal proved again that such setbacks are only temporary for the Earthquakes.

“We are committed to each other for the full 90 plus, whatever it takes, and we’ve obviously prove throughout the year that it is possible to score late goals,” said Cronin. “Whether in the first minute or the 90th minute, they all count the same, so we’ve got to keep pressing the envelope and we are earning the results.”

And with that assessment, Cronin let out a smile that said much more about this Earthquakes team than any words he shared. Whether you call them the Cardiac Quakes or enjoy the campy “Goonies never say die” mantra, San Jose always play to the final whistle. So far in 2012, the team has won five games with stoppage time goals and scored seven overall past the 90th minute. Going to Buck Shaw Stadium to watch the Earthquakes is guaranteed to be a great time out, but the ensuing late game dramatics are certainly not for the faint of heart.

“We’ve taken some years off our lives,” quipped Cronin as he let out a chuckle, “but it’s good no matter how we get the goals.”