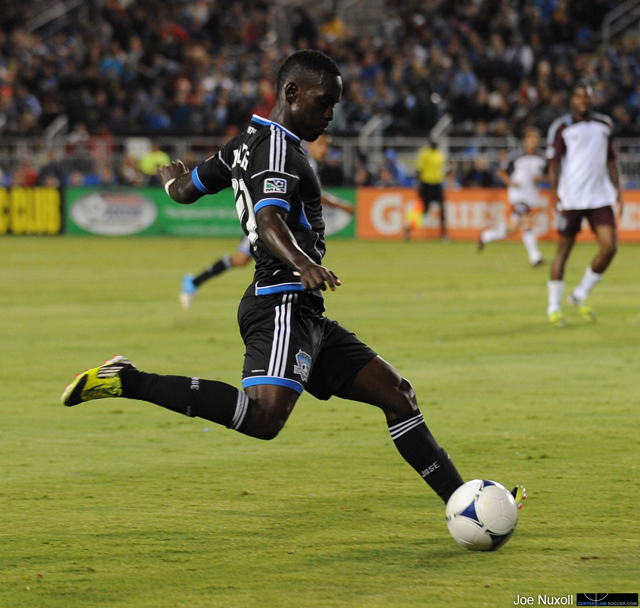 Just over a month ago, Chris Wondolowski was being crushed by a circle of reporters in the San Jose Earthquakes locker room following his hat-trick performance against Real Salt Lake. The topic was not about if he would surpass single-season MLS scoring record holder Roy Lassiter’s 27 goal haul from 1996, but when.

Wondolowski smiled at the indirect compliment of his massive 17 goal start to 2012, but was very quick to turn the attention back to efforts of the team. To paraphrase, the Earthquakes MVP stated that he would trade away a chance at the scoring record — in fact, he’s be okay if he didn’t score a goal the rest of the season — for the opportunity to hoist the MLS Cup trophy on December 1st.

The figurative has become the literal, as Wondolowski was again denied a goal from the run of play for the sixth straight match following Saturday night’s 4-1 drubbing of the Colorado Rapids. But true to his wish shared back in mid July, his teammates have picked up the slack for a team gunning for MLS postseason success.

Behind two goals each from Simon Dawkins and Alan Gordon, the San Jose Earthquakes thoroughly dominated the Rapids in a 4-1 victory at a sold-out Buck Shaw Stadium that saw the team push their home unbeaten streak to 14 games.

On an evening that saw the organization announce plans for the groundbreaking of their new stadium, which is slated for October 21, the Earthquakes impressed the 10,525 in attendance at their current home in taking three points from a struggling Rapids team and extending their lead in the race for the MLS Supporters’ Shield.

The catalyst for the Quakes was Dawkins, whose dynamic movement with the ball kept the Colorado defense on their heels for much of the night. Against the Rapids, the midfielder, in his second year with San Jose on loan from BPL side Tottenham Hotspur, matched his scoring total from last season in notching his fifth and sixth goals of the 2012 campaign.

“I’ve said it all along, I think he could be one of the better players in the league,” said head coach Frank Yallop. “With his feet, his vision and now he’s adding to that with goals and assists, he’s really coming into form. He comes to work every day with a smile on his face and it shows. He tries to create and be dynamic with everything that he does and I’m very happy for him.”

Dawkins first goal of the game came early in the first half, and was assisted by Gordon, whose contributions on the night more than made up for the absence of suspended regular starter Steven Lenhart. Gordon had a superb performance in the target forward role, and his effort to get Dawkins involved on the first Earthquakes goal did not go unnoticed by Yallop.

“It started with a great play from Alan [Gordon],” said Yallop. “You talk about hold up play; it can’t get any better than that. Chest, down, great ball out to Simon who was one-on-one and I think Simon enjoys one-on-one. It was a really good goal all around.”

Gordon scored just prior to the halftime whistle, but the Rapids pulled one back early in the second half to give the visitors a glimpse of hope that they could crawl back into the game. However, the Earthquakes rallied soon after, and the team returned to the style of play that had marked their earlier dominance.

“That goal was a bit of a wake-up call for us that we needed as a reminder to keep our game from the first half and attack,” said Simon Dawkins. “We managed to get back on track and tacked on a couple goals by the end.”

A resurgent performance from team captain Ramiro Corrales, making his first start since being suspended following a red card ejection in a July 7 game at FC Dallas, led to him providing assists on three of the team’s four goals, including two second half goals from Dawkins and Gordon. The completed braces from the two goal scorers salted the match away for the Earthquakes, and the team soon celebrated their eighth victory of the season at Buck Shaw Stadium.

“It was a good night for the team,” said Corrales. “We got three points, that’s what the team wanted. The team played really well and I’m happy to be out here and playing again.”

While Dawkins matched his career high for goals scored with 6, Gordon’s brace extended his career best season total to 11. Along with star striker Chris Wondolowski’s 18 league leading goals so far this season, Gordon’s 2012 tally gives the Earthquakes two players with more than 10 goals scored in a season for the first time in franchise history.

“We have a bunch of talented guys that work hard and have a good chemistry going on,” said Corrales, “and it shows every game.”

The Earthquakes took their season points total to 50 with the win over the Rapids, and the team has now scored 52 goals in their first 26 games and are now only 3 goals behind their franchise record of 55 goals scored in their 1997 season.

San Jose did not waste any time getting the scoring going against Colorado, as in the 11th minute, Dawkins took an impressive cross field pass from Gordon and dribbled the ball into the area. The Englishman cut back across the grain, shedding a defender in the process, before lacing a shot just past goalkeeper Matt Pickens and inside the near post for the 1-0 lead.

The Earthquakes doubled their lead in the 43rd minute following a free kick just inside the Rapids half. Corrales elected to drop a short pass to Rafael Baca instead of a delivery into the area, and the midfielder carried the ball at the defense. Baca shook loose from his marker as he entered the area, and he delivered a steady crossing pass into the 6-yard box. Gordon, stepping between two defenders, deflected the ball on target and past Pickens to extend the Earthquakes lead to 2-0.

Colorado pulled one back in the 54th minute off of a corner kick opportunity. With Justin Morrow struggling to keep up with him on the play, Rapids defender Tyrone Marshall rose high in the area to head home the delivery from Martin Rivero and score the goal that trimmed the Earthquakes lead in half.

Rattled, but not defeated, the Earthquakes struck back in the 68th minute through Dawkins. A quick throw-in from Marvin Chavez found Sam Cronin with pace running toward the Rapids area. The midfielder squared the ball across the top of the 18 for a waiting Dawkins, who one-touched the pass inside the far post to extend San Jose’s lead to 3-1 and stem any idea of a comeback by Colorado.

The Earthquakes completed their scoring on the night in the 75th minute as the Rapids defense crumpled under pressure from the San Jose attack. A weak clearance following a long throw-in into the area from Steven Beitashour was headed back toward goal by Corrales. Gordon anticipated the play and collected the ball behind the defense and calmly slotted home his second goal of the game and the Earthquakes fourth goal of the night.

With little drama left in the contest, both teams played out the final quarter hour and at the final whistle the Earthquakes celebrated hitting the 50 point mark for only the third time in franchise history. San Jose returns to action this Sunday when they play host to Chivas USA at Buck Shaw Stadium.