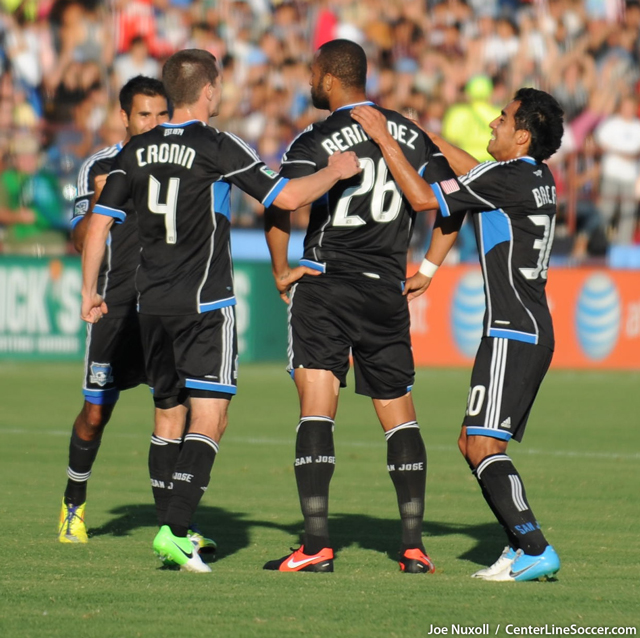 (Santa Clara) The San Jose Earthquakes haven’t lost at Buck Shaw Stadium in over a year, and they also enjoy the league’s highest scoring offense, so Sunday’s 4-0 thrashing of Chivas USA shouldn’t be considered much of a surprise, until you see whose names are on the score sheet.

Victor Bernardez started things off with his second goal of the season, and Ramiro Corrales killed off the game with his first two goals of the campaign as the Earthquakes pulled ahead in the Supporters Shield race with a decisive victory, their third in their last four games.

The offensive output also lifted San Jose to a new club scoring mark for a MLS season. With seven games left on the schedule, the Earthquakes have scored 56 goals, one better than the their previous best for a season, a record set back in 1997.

Frank Yallop was well pleased with his team’s accomplishments. “To go back to 01-03, when I was here, to outscore that team? That was a good team, with Donovan, Cerritos, Dwayne (DeRosario). For us to do that in the day and age that our league’s at in the moment, with quality players all over the field, with DPs, and us not spending a cent, and everyone spending more money than we do, it’s phenomenal,” Yallop said.

“Chivas played well tonight. They didn’t finish their chances, but they had some good looks. It’s just that we were really clinical,” Yallop said. “Our team right now, especially at (Buck Shaw) is a team that’s moving the ball well, working very hard for each other, and we have quality players in front of goal.”

Victor Bernardez opened the scoring in the 11th minute with a surprising 40 yard free kick, a low drive that curled around the 3 man wall and skipped past the Goats’ goalkeeper, Dan Kennedy, beating him cleanly inside the left upright.

San Jose nearly doubled their lead in the 16th minute, when Steven Beitashour’s chip found Chris Wondolowski open near the penalty spot, but Wondo’s snap header banged off the crossbar.

Chivas USA is the only team averaging less than a goal a game this season in MLS, but the Goats gave Jon Busch plenty to worry about in the opening half. Just six minutes in, Casey Townsend rolled a centering pass from the right wing that trickled through traffic at the near post and fell to Juan Aguedelo for a point blank shot. Busch was in the right spot to snuff it out.

Shalrie Joseph had an open shot from the top of the arc in the 13th minute, but missed wide right. A minute later Chivas USA was gifted a golden opportunity when Ramiro Corrales played a weak back pass that sent Juan Agudelo in alone on goal. Jon Busch came out to the top of the penalty area to make a big save.

Just before the half hour mark, Tristan Bowen’s cross found Casey Townsend for an open header that missed wide right. Five minutes later, it was Miller Bolanos releasing Agudelo down the inside left channel, but again Jon Busch was up to the task.

Having weathered the storm, the Earthquakes scored their second goal in the 39th minute. Marvin Chavez fed Wondolowski at the top of the penalty area, and Wondo in turn set up a charging Simon Dawkins. Dawkins held off a defender and banged home a right footer from 12 yards out for his seventh goal of the year.

After intermission, San Jose kept up the pressure and controlled the game the rest of the way.

“In the team meeting, I said we must make sure we maintain our standards that we set all year,” Yallop said, “If you look at our group, and the hard working unit we have, we don’t take our foot of the gas in any minute of the game. So, even at 4-0 we’re still pushing and doing the right things in the match to continue. Not to score more goals and embarrass the opposition, but doing the right things so we don’t concede a goal. That’s very important.”

“I wanted to get a clean sheet tonight. I think we deserved that,” Yallop said. “Jon Busch made a great save at 1-0, coming off his line. "

Chivas had one good look at goal in the second half, when Tristan Bowen drilled a 15 yarder from a tight angle, but Busch was able to punch it over the bar.

Steven Lenhart replaced Alan Gordon at the hour mark, and thought he had scored San Jose's third goal in the 68th, heading in a Marvin Chavez corner kick. But referee Mark Geiger whistled a foul on the play, then give Chris Wondolowski a yellow card for protesting the call.

Ramiro Corrales effectively killed the game off in the 72nd minute with his first goal of the season, a 27 yard free kick that skimmed over the top of the defensive wall and flew just inside the right upright.

Nine minutes later, Corrales scored on another free kick, this one taken while Chivas USA was organizing their defense.

“We haven’t scored many free kick goals, and we scored three tonight,” Yallop said. “All the things we ask our players to do, they’re feeling confident and able to do those things, and it was good tonight.”

“Our discipline is great. Our chemistry is excellent, and that shows when they’re playing. We have a player coming off the field in Alan Gordon, he’s chest bumping the player coming on. Whether you like that or not, it’s a good sign that we are together and we’re on a mission to do well. I love it. Any coach will tell you it’s great to work with a great group, and we have that right now,” Yallop said.

“It’s nothing to do with me. It’s the players. They want to do it. I set them up to play, but they go out and play with confidence, and they love each other so I think that’s huge.”

With World Cup qualifiers next week, San Jose gets some time off before returning to action Sept 15, a rematch with Chivas USA at the Home Depot Center.