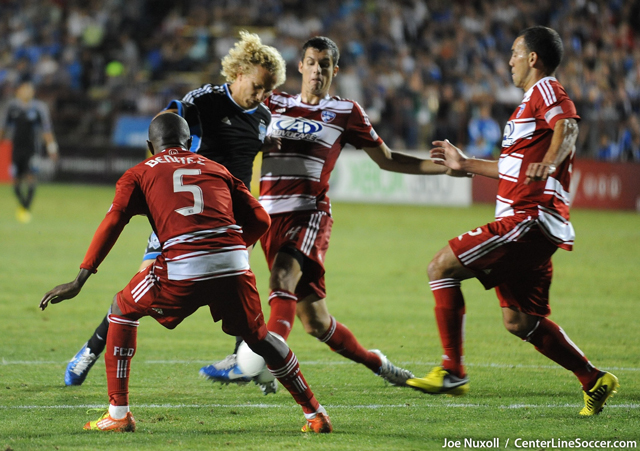 (Santa Clara) All season long the San Jose Earthquakes have come up with a late goal when they need one, and often it’s been Steven Lenhart and Alan Gordon providing the last minute heroics. Saturday night in front of an overflow crowd at Buck Shaw Stadium, the Lenhart and Gordon tandem took things a step further, coming up big not once, but twice in the closing minutes to lift San Jose to a hard fought 3-3 tie with FC Dallas.

Lenhart scored twice from Gordon assists, the first coming in the 82nd minute to tie the game at 2-2. Then after Matt Hedges gave Dallas the lead in the 88th, Lenhart nodded home a header from close range in the 95th minute to even the score at 3-3. It was the ninth time San Jose has scored this year in second half stoppage time, extending the team’s MLS record and rescuing a point from what looked to be their first defeat in Santa Clara since August 2011.

Both teams came into the game in fine form. The Earthquakes had taken 13 of 15 possible points over the past five matches, while Dallas had won 4 and tied one of their last 6. Dallas had more to play for; they started the night two points shy of Vancouver and the last Western Conference playoff spot.

San Jose took the lead in the 24th minute when Sam Cronin released Marvin Chavez down the right side with room to run, and Chavez in turn sent a pass towards Chris Wondolowski racing up the middle. Wondolowski dummied the ball through to Alan Gordon for wide open shot from 8 yards, and when Gordon hit it first time, Dallas goalkeeper Kevin Hartman had no chance. 1-0 San Jose.

Alan Gordon has been in the league since 2004, but had never scored more than 5 in a season until now. That goal raised his total for the year to 13.

Dallas tied it in the 37th, taking advantage of some loose San Jose defending. Jackson got past San Cronin to bring the ball up the right wing, centering for Blas Perez near the penalty spot. A Victor Bernardez slip gave Perez a wide open shot, and he slipped a right footer past Jon Busch and just inside the far post for his sixth goal of the year.

With Simon Dawkins recovering from an ankle sprain, Mehdi Ballouchy was given the start on the right side of midfield. Early in the second half, joined Dawkins on the DL, hurting his left knee badly, landing awkwardly while trying to bring down a pass. Ballouchy had to be stretchered off; Steven Lenhart was called to take his place.

Dallas then went back ahead, scoring in the 72nd minute when David Ferreira pulled down a poor San Jose clearance and from the left side of the penalty area drove a cross that Blas Perez got just the slightest touch on, a flick on header that beat Jon Busch to the far post.

That set the stage for Lenhart’s first late goal coming 10 minutes later. Lenhart played a header to Alan Gordon at the top of the area, and got on the end of the return pass, drilling a shot with the outside of his left foot from 18 yards.

Dallas looked like they were about to steal a page from the San Jose playbook when they again took the lead in the 88th minute. A 20 yard drive by Daniel Hernandez deflected off the left upright, and Matt Hedges won the race to the rebound, banging it into an empty net to give Dallas a 3-2 advantage.

But when the referee signaled six minutes of added time, the Earthquakes knew there was plenty of time to get something out of the game.

“It’s a will,” Alan Gordon said. “It’s a will to dig deep and reach where the other team doesn’t want to reach. They thought the game was over, and the game was far from over.

After they scored their third goal, Lenny looked at me and said “we’re gonna get this,” and I was right there with him. There was not one feeling of doubt within me. We were going to fight until the end, and we did.”

Dallas almost put the game away in the 92nd minute. From the midfield stripe David Ferreira sent Fabian Castillo in alone of goal, but Jon Busch came up with the save to keep his team close.

Then, in the 95th minute, as the Earthquakes swarmed the Dallas net, Justin Morrow fed the ball to Gordon, who headed it across the face of goal. Steven Lenhart was there at the far post to rise above the defense and head home the equalizer.

“I was just trying to get it in the mixer,” Gordon said. “I put it in a good spot, and Lenny got up well. I knew he would be there, and he dunked it.”

“Alan, Lenny, Wondo, those guys have been doing it all year so you’re not really surprised when you look at the stats and you see Alan got his goal, and Lenny gets two” coach Frank Yallop said. “Steve probably deserves to start, but with Alan (Gordon) and Wondo doing so well, maybe I’ll end up starting all of them.”

“What I like about Lenny, he’s very loyal to the team, and very focused. It doesn’t matter what his role is, he just wants to do what’s best for the team, whether it’s coming off the bench, or starting the game, or not even playing. For him to score two great goals: a header as brave as anything, and the finish on the outside of his left foot that was wonderful, I’m very pleased for him,” Yallop said.

The goal gives Lenhart 10 on the year, and the earthquakes now have three scorers in double digits.

“Maybe we can get Simon Dawkins a couple goals and it will give us four guys in double digits,” Yallop said.

With Kansas City’s shut out win Friday, the tie means the Earthquakes lead in the Supporters Shield race has shrunk to three points with three games left in the regular season. Victor Bernardez picked up a yellow card in the first half, which means he’ll miss the trip to Denver next Saturday as he sits out a suspension for accumulating five this year.

“Once we made the playoffs, the next step was to win the Supporters Shield, so we’re really trying to focus on that,” Yallop said. “It’s about winning the next three games. The Shield’s at the end of that, but it’s about us winning three more matches. I feel good that this group is destined to do it, but we still have three difficult games coming up.”