Jon Busch getting the job done for the San Jose Earthquakes

Share All sharing options for: Jon Busch getting the job done for the San Jose Earthquakes 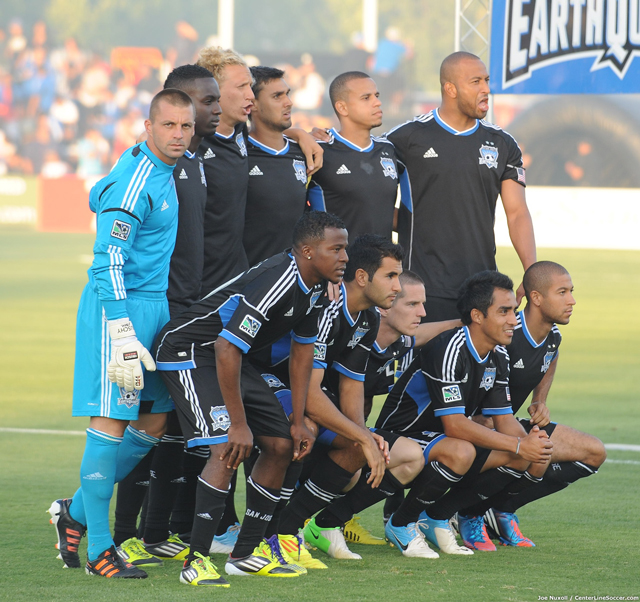 After posting his sixth clean sheet of the season, San Jose Earthquakes goalkeeper Jon Busch’s reward was a dip in the locker room ice bath. Located in the small trainers room just to the left of the pizza-laden buffet table, the bath was a not the usual post match destination for Busch, but tonight the 36-year old would require a bit more recovery time.

As his teammates made their way out into the Santa Clara night, and the throng of reporters dissipated to an intrepid pair, Busch took his time with the trainers as he concurrently held court with a couple fellow warriors from the San Jose Sharks. Standing amongst the Earthquakes, hockey players are a physically imposing sort, but on a night when he made the biggest plays for his team, Busch did not look out of place in their presence.

The veteran ‘keeper, famously diminutive in size, stood tall for the Earthquakes against Chivas USA in helping to preserve that evening’s 4-0 victory. Twice in the first half, with the team nursing a 1-0 lead, Busch was twice called to make spectacular stops of Chivas teenage sensation Juan Agudelo. The second was what he called “a routine reflex save,” but the first was a body-sacrificing shot to the midsection that stoned the Chivas forward at the edge of the area and necessitated Busch’s post game ice bath soak.

“Just another day at the office,” he quipped when he finally made it back to his locker stall.

Busch was not going to claim any personal reward for his performance a goal, but earning the shutout did take a bit more work than he has had to put in compared to prior games. He knows that a big component to the team’s success has been a high-pressure offense that can leave space in the back. Vulnerability to opponents’ counterattacks is the price paid for aggressive play in the attacking third.

“Some days you are called on more than others and tonight I was called on a little bit more than I have been in the past,” said Busch. “I am glad to do my job and help the team. For me, it is not about anything I did. It is more important that we go after those extra couple of goals.”

In the new attack-friendly world of MLS, where outscoring your opponent is more important than grinding out 1-0 results, you might give up a few in an effort to get a few more. And while one might think to a goalkeeper that such a strategy is disagreeable, Busch is a strong proponent of what the Earthquakes are doing this season.

“It’s a double-edged sword,” he explained. “You’d like to get more clean sheets, but at the end of the day the only thing that matters is 3 points. If we win 3-2 or 4-3, that is all that matters. It isn’t about individuals and clean sheets or anything else — the focus is on winning games whatever we have to do to accomplish that goal.”

The best way to win games is to outscore your opponent, and the Earthquakes have done that with aplomb this year, netting 56 times already and setting a new franchise mark for goals scored in a season. San Jose has 7 games remaining on their schedule, and that scoring record is likely to dramatically increase. But for Busch and his teammates, the only goal that matters is winning the league, capturing the Supporters’ Shield, and making a deep run to an MLS Cup championship.

“Absolutely, we are keeping one eye on the other teams,” he stated unequivocally. “Now that you are getting into that stretch run of games for everybody, we want to maintain first place. We knew what Kansas City did, we knew what Seattle did, and we knew what Salt Lake did. We knew it was important for us to get the three points and to continue to dominate at home.”

Going back to last August, the Earthquakes have made Buck Shaw Stadium their fortress, and now boast a 15-game unbeaten streak at their Santa Clara University field. The franchise record for the longest unbeaten streak of any kind was 18 games accomplished over the 2004-05 seasons at Spartan Stadium. The current Earthquakes could tie that record if they complete the 2012 season without a loss at The Buck.

“We are a confident bunch in a good way,” explained Busch. “We are not cocky, but we know we are playing well. The nice thing is that we feel confident in the way we play. If we go out there and play our game, more times than not we are going to win. We have a great group of guys here.”

A great group of guys, indeed, all just going to the office and doing their jobs. And through that workmanlike effort, they look firmly on the path to advancement to the top of the league.