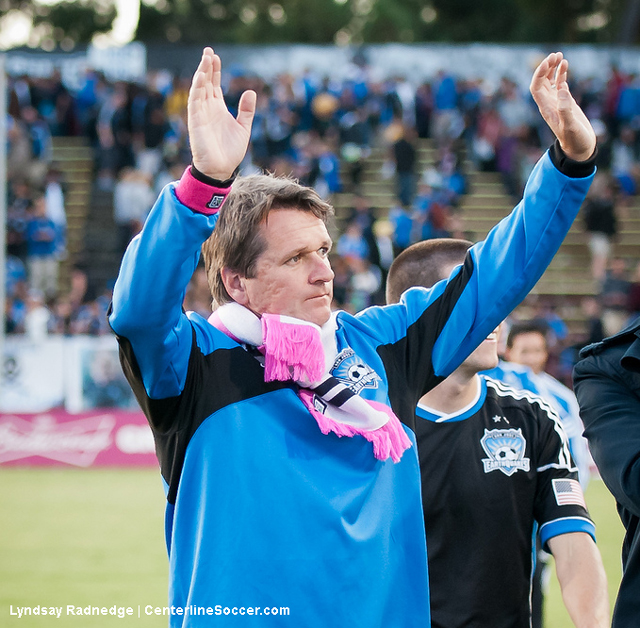 Making a selection to meet a need, the San Jose Earthquakes choose Georgetown centerback Tommy Muller with their first pick in the 2013 MLS SuperDraft. The senior defender was the Hoyas captain the past two seasons, and in 2012 led his team to a runners-up finish in the NCAA College Cup. Muller made 59 starts in 64 appearances during his college career and helped Georgetown post 10 shutouts in his senior season.

“Muller was high on our list,” shared Earthquakes head coach Frank Yallop. “He did very well at the Combine. He is a solid, athletic central defender who we were looking to get. We were very pleased with that selection.”

Muller, who was not in attendance in Indianapolis for the SuperDraft proceedings, heard the good news from friends ringing up his cell phone as the pick was made. Upon learning that he was selected by the Earthquakes, Muller exclaimed, “Definitely a good moment. I’m really excited.”

At 5’-11”, Muller may seem a bit undersized for a centerback, but he more than makes up for a lack in height with a good awareness for positioning. During ESPN3.com’s coverage of the SuperDraft, commenter Taylor Twellman said of Muller, “He deals very well in tight spaces. I love his intangibles. You can tell he’s a real leader.”

Muller echoed Twellman’s assessment, as he adressed concerns that he may not have the size to compare with other centerbacks in MLS.

“I have a lot of the athletic tools necessary to be successful as a centerback with jumping and recovery speed. But I think more than that my thinking and entire vision of the field is good. I feel that I make good decisions with the ball especially out of the back. Those things have allowed me to be successful so far and I think it can translate to the MLS.”

Coach Yallop was not concerned with the lack of physical size that Muller possesses and was instead impressed with how the defender rated in terms of his skills and attributes.

“He’s very, very athletic,” said Yallop. “That was the big thing that stuck out for us. He scored very high in the charts for all the fitness tests (at the MLS Combine) — pace, speed, agility — so his size doesn’t matter.”

Muller has tallied 4 goals and 4 assists in four seasons with Georgetown. With the Earthquakes, he is likely to play more in the style of Jason Hernandez as the deep centerback, or potentially as cover at fullback. Either way, with San Jose playing on three fronts in 2013 (MLS regular season, 100th U.S. Open Cup tournament, 2013-14 CONCACAF Champions League group stage), Muller will have every opportunity to earn playing time in his rookie season.

“For me going into the combine, I didn’t have any knowledge of teams that would potentially want me or who were interested,” said Muller. “My real focus going into the combine was to show well and to do the things I do well. I had an idea that San Jose had reached out to Georgetown, and it became a real possibility that they would pick a centerback, so that was something I was excited about and looking forward to going there and contributing in any way and to whatever extent I can.”

The Florida native elected to watch the draft with family after making the drive home from the MLS Combine in Fort Lauderdale. Knowing he would have a quick turnaround to join the team that drafted him, Muller can now pack his bags knowing he will be starting his MLS career in San Jose on Monday when the Earthquakes start preseason camp.