It was a warm and sunny Monday in San Jose as the players returned to the pitch at the Earthquakes training facility this week. Absences included Chris Wondolowski, Steven Beitashour and Justin Morrow, who are putting in time with the USMNT down in LA, ahead of the international friendly against Canada. The Earthquakes squad includes the new faces of Mike Fucito, and draftees Tommy Muller and Danchrisandre Delgado - the Quakes Facebook photo gallery also contained the familiar (but as yet unsigned) faces of Corrales and Stephenson - and Jon Busch sported a haircut so short that it should last to First Kick on March 3rd.

One other notable absence was Simon Dawkins, the English midfielder who has spent the last two MLS seasons with the Earthquakes on loan from EPL's Tottenham Hotspur; his future with the club remains in question. After several loan spells across the UK, Simon suffered through several injuries but eventually worked his way into the Spurs reserve squad before his loan to San Jose. Even then his injuries didn't end, and his medical vocabulary was extended with his bilateral simultaneous fasciotomy surgery needed to free his calves from exertional anterior compartment syndrome (easy for an orthopedic surgeon to say). His calves released to do their work, Dawkins was a productive member of the 2012 Supporters' Shield winning squad, with eight goals and an assist. His nifty footwork, precision passes, and ability to elude the opposition, who employ fair means and foul to slow him down, have all impressed front office, and by all reports the club is working hard to bring him back permanently. 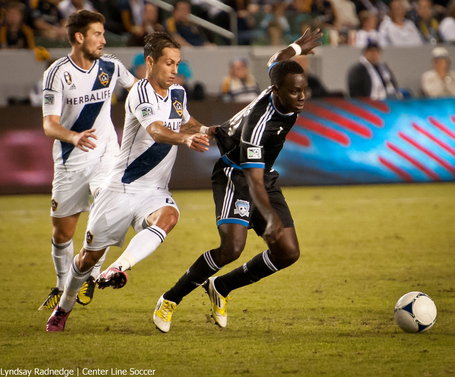 Luke James's recent column at Soccer Newsday argues that the chances for the return of the 24 year old to San Jose are slim. James makes the case that Tottenham's chairman and "asset manager" Daniel Levy sees Dawkins as valuable property, so the Earthquakes might face some serious competition from English clubs. Perhaps more significantly for the tightly funded Earthquakes front office, his return to California depends on the fee Tottenham will ask for him. In the meantime, Spurs are in dire need of midfield help after the loss for the season of Brazilian Sandro Raniere after surgery. Tottenham have ramped up their transfer activity, moving up their time line for the acquisition of 22 year old Lewis Holtby from FC Schalke 04, and Spurs chances of a Champions' League spot for 2014 might depend on Levy's acquisitions before the close of the current transfer window on January 31. It remains to be seen if these moves might edge Simon Dawkins out of White Hart Lane, and make him superfluous to their needs, but Spurs will still be looking for the best financial deal they can get for him.

The midfield moves at Spurs might be good news for the Earthquakes fans, and it's clear that they want Simon back in the Blue and Black. Of course, while his effectiveness on the pitch earns their respect, he's a favorite for autographs after the game with his disarming smile and affable personality. In the Twitterverse, various Quakes fans, especially members of the 1906 Ultras, have been reminding @SimonDawkins87 how much they miss him. Just in case Earthquakes fans need any further incentives to share with Simon to help lure him back to Northern California, there's a list included below. 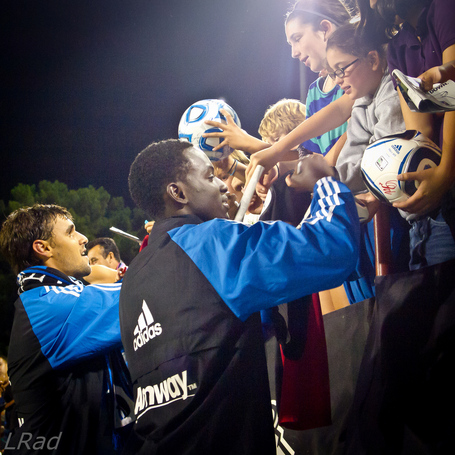 Weather: It's clear that two seasons of sunshine in San Jose have weakened Simon's resistance to the cold weather in the UK:

Way to cold in London. Missing the California weather

It's a little known fact that there are at least fifteen different grades of rain in the UK (the "rain" in Seattle is what English refer to as "misty"). British rain is a cold rain that sucks the life out of your body - warmth seeping out through your wet socks and soaked, woolen mittens, as you stand on the terraces with a cup of hot Bovril. In Silicon Valley the median temperatures are not too hot, not too cold, and with plenty of sunshine to maintain vitamin D levels as we bask in the bleachers with a cold beer. Ocean breezes on the coast are just a short drive away if the valley gets a little toasty in summer - chance to take in some of northern California's big waves and laid back surfing lifestyle.

Food: Fast food establishments in the UK revolve around chip shops and the local curry house. Staples at the football stadiums still include fish and chips, but also the paradigm of idiosyncratic British cuisine: the meat pie - served at half time with chips or mash, and always with gravy. Given the global economy and population of Silicon Valley, excellent Indian food emporia have sprung up in nearby Sunnyvale, fresh Fish and Chips are sourced locally from the California coast, and now even meat pies are available on the internet. And all of these are served in generous American-sized portions.

New Stadium: First kick for the new Earthquakes stadium, on the corner of Earthquakes Way and Coleman Avenue, is slated for the opening of the 2014 MLS season. A brand new, state-of-the-art, soccer-specific facility, will contrast favorably with the drafty dressing rooms and cold showers of White Hart Lane - I imagine, since it was built way back in 1899 before hot water was invented. Incidentally White Hart Lane and many British soccer stadiums of that era were designed by one Archie Leitch - perhaps a distant, Scottish relative of Quakes Academy director Chris Leitch. I digress - the thrill of the natural grass of a brand new stadium is surely incentive for a multi-year deal.

Nickname: Maybe a nickname for Simon would help? Most of the nicknames around the Earthquakes squad are along the lines of typical English soccer nicknames: Gordo, Lenny, Wondo, Buschy - which would lead us to Dawksy or Dawko. Not very imaginative, but Justin Morrow recently let us in on a couple of interesting nicknames:

First day for the @sjearthquakes. Miss you guys! Anybody know if Chopsticks aka 007 aka @simondawkins87 made an appearance today??

007? "Dawkins. Simon Dawkins" (cue the James Bond theme tune here). I suppose we can glean a quantum of solace from the fact that he had such fun playing in his second season for the Earthquakes - enough to bring him back willingly.

Champions League Play: Finally, if the Earthquakes want Simon Dawkins back, they will be able to tempt him with Champions League play in 2013. It might be CONCACAF instead of UEFA, but that's not an honor that Tottenham Hotspur have earned this this season. Yes, I went there Spurs fans.