Just in time for the holidays, Center Line Soccer photographer (and freelance UX designer) Joe Nuxoll created a must-have eye-popping super-cool circular calendar of the San Jose Earthquakes 2014 MLS regular season. So awesome that you need to get yourself to a high-quality printer ASAP!

The San Jose Earthquakes revealed their 2014 regular season schedule on Monday -- even before the book has been closed on the 2013 MLS season -- and already supporters are making plans for the new year of Quakes soccer.

Highlights on the home schedule include a fourth annual Summer Spectacular at Stanford Stadium with three-time guests the LA Galaxy. In mid-July, Frank Yallop makes his Buck Shaw Stadium return at the helm of the Chicago Fire. And on August 2, the Quakes host the Seattle Sounders at Levi's Stadium in the first official sporting event at the San Francisco 49ers new stadium in Santa Clara.

Even the road schedule looks enticing, with four trips planned for Canada and a mouth-watering encounter at Red Bull Arena that will pit the two previous Supporters' Shield winners against each other. Throw in a Cascadia doubleheader in early September, and post-Labor Day plans are very easy to envision.

So how to plan out your viewing plans for 2014. Center Line Soccer photographer Joe Nuxoll has you covered. An accomplished UX designer -- check out the Tesla Model S central console touchscreen to see his handiwork -- Joe put together an amazing pinwheel calendar of the entire 34-game Earthquakes regular season schedule (full-resolution PNG image here). Be sure to download this beauty and print out a copy for your refrigerator, your office, your man-cave -- for every room you imagine you'll ever be in and need to have the Quakes schedule at your fingertips!

Also, please share Joe's handiwork with your friends. He and all of us here at Center Line Soccer are very much looking forward to an exciting 2014 San Jose Earthquakes season. Go Quakes! 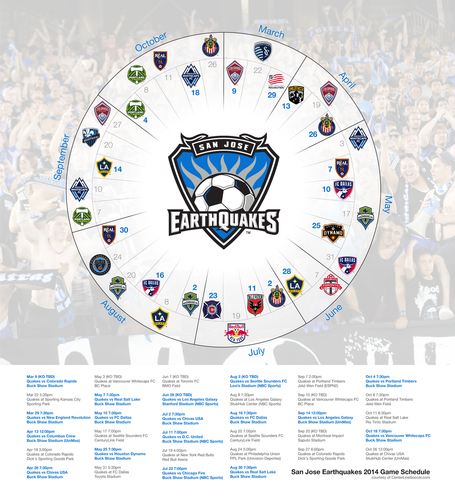