The San Jose Earthquakes, despite being a man up for much of the match, had to settle for a scoreless draw with AIK of Sweden in Round Two of the Portland Preseason Tournament. Tottenham midfielder John Bostock looked much better in his third appearance for the Quakes, while Sierra Leonean midfielder Abu Tommy made a strong case to be included in the club's final 30 man roster.

Share All sharing options for: San Jose Earthquakes held to scoreless draw by AIK of Sweden in Round Two of Portland Preseason Tournament

Another match at Jeld-Wen Field and another draw for the San Jose Earthquakes, as a reserve-laden starting XI could do little to challenge AIK of Sweden in the second round of the Portland Timbers Preseason Tournament. Head coach Frank Yallop had to be proud of the defensive effort shown by his side in the scoreless affair, but their effort was certainly aided when AIK had a man sent off late in the first half and played more conservatively the rest of the way.

The star of the match for the Earthquakes was Tottenham Hotspur midfielder John Bostock. The 21-year old looked much more active Wednesday night against the Swedes than he did Sunday against the Portland Timbers. A trio of shots from the Englishman proved to be the best chances San Jose had to break through the tough AIK defense, included a deft toe poke in the 14th minute that the goalkeeper did well to turn around the far post. 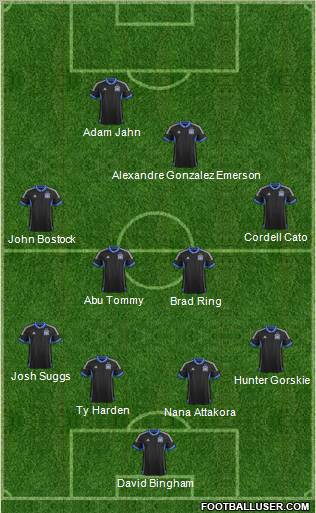 Bostock split time in the first half between the right and left wings, and he looked most comfortable playing on the right and cutting the ball across the field onto his preferred left foot. In the 36th minute, in such a manner, Bostock shock free of the defense at the top of the area, but his shot was comfortably saved by the 'keeper.

In the second half, playing more as a withdrawn forward behind Supplemental Draft pick Adam Jahn, Bostock looked very comfortable on the ball and played more aggressive while in possession. He showed the occasional burst of speed through the center of the field, but also was willing to track back beyond the center line to secure possession for his side. The Spurs trialist saw his night complete at the 62nd minute mark. Bostock is likely to make another appearance for the Quakes in Saturday's tournament finale against FC Dallas.

Other Earthquakes to make a positive impression in the scoreless draw were Jahn as a target forward and Abu Tommy as a box-to-box central midfielder. The former, a non-drafted invitee to Earthquakes preseason camp, was very active in the attacking half of the field, using his 6'2" frame to consistently get a hand to the ball. Jahn also showed well with the ball at his feet and on a number of occasions linked up well with fellow trialist forward Alexandre Gonzalez Emerson. Both forward were in constant motion with Tommy at the controls from his midfield position. The trio of trialists never had the teamwork necessary to create quality scoring chances materialize, but each on his own had his moments.

Another player trying to make a mark in the match was Trinidad and Tobago speedster Cordell Cato. Playing on the wings for San Jose, Cato seemed to be on an island too often, and was not as effective in linking up with teammates as he should from the outside midfielder position. Supposedly auditioning for the role of a Marvin Chavez or Shea Salinas, Cato showed the same level of industry and speed, but not the same chemistry with his field mates.

The defensive back four, by virtue of the red card awarded to AIK, were rarely tested, but when they were called to action, they effectively limited the looks on goal by the Swedes. Ty Harden in the middle and Josh Suggs on the left wing were especially busy, but they comported themselves well in the match. Hunter Gorskie on the right was a little less comfortable looking in the match, but steady Nana Attakora was always there to help out the rookie hopeful.

The Earthquakes complete their Portland preseason experience with a Round Three match on Saturday against FC Dallas (2:30 p.m. kick-off, live streaming available, along with a running commentary, at www.sjearthquakes.com). The Quakes return to San Jose following the match with one week remaining before opening the 2013 MLS regular season with a home opener against Real Salt Lake on Sunday, March 3. For many of the trialist and rookie hopefuls in camp, the next few days are make-or-break if they want to be added to the final Earthquakes 30 man roster.