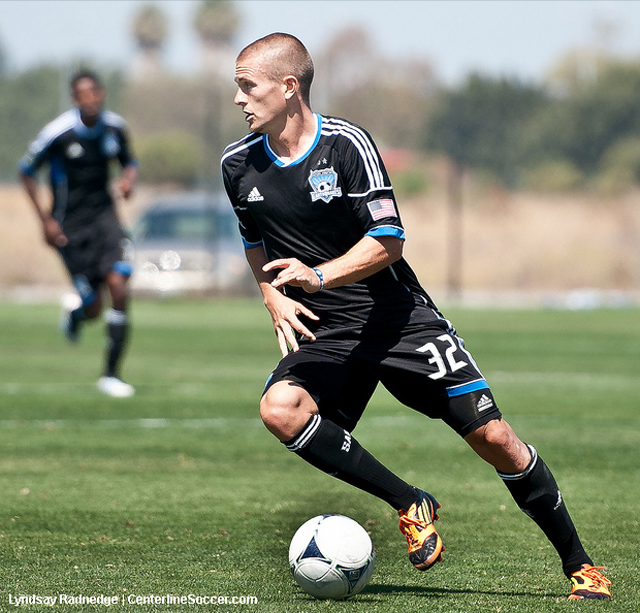 Available roster spots on the 2013 San Jose Earthquakes squad are drying up quickly, so the numerous non-roster invitees and draft picks in preseason camp will likely learn their fates over the remainder of the week. As the build up begins to the Quakes MLS regular season opener this Sunday, the roster holds 25 players under contract, which ostensibly leaves 5 slots available for 10 hopeful players.

Prior to the team’s training session Tuesday morning, head coach Frank Yallop revealed the he has a difficult job over the rest of the week paring down the number of players the team hopes to carry into the season. Of the 11 players not under contract that traveled to Portland for last week’s preseason tournament, only two players are for certain not under consideration — Tottenham Hotspur midfielder John Bostock and Trinidad and Tobago midfielder Sean de Silva.

“Signing Bostock would have taken all of our cap,” said Yallop, “and with the injuries we have right now, it was just too big of a gamble for us to let that much money. John did fine with us, and we liked him, but it didn’t work for us financially.”

Where the Earthquakes need the most help on the roster — at least to start the season — is evident by looking at the litany of players on the injured reserves list: Steven Lenhart, Alan Gordon, Marvin Chavez, Mehdi Ballouchy, and Steven Beitashour. Target forwards and effective wingers are in short supply in the Quakes stable, and Yallop suggested that help is on the way on both fronts.

“Adam Jahn’s done a lot of minutes for us lately and he’s done fine,” said Yallop of the Stanford forward selected in this year’s Supplemental Draft. “I’m expecting to probably add him to the roster, at least to play for us and be available for us.”

Jahn is listed at 6’3” and plays every bit like a target forward. In the recently concluded Portland Preseason Tournament, the 22-year old played in all three games, starting the middle game against AIK of Sweden, and fit right in with his teammates in much the same manner seen from Lenhart or Gordon.

At midfield, the Earthquakes are looking to add another player, yet to participate in this preseason camp, but Yallop stressed that any deal was still in the works and would not be announced until everything was official with the league. Yallop did single out 20-year old Cordell Cato as a midfielder the team was keen to bring aboard. The Trinidad and Tobago player’s contract rights are still held by the Seattle Sounders, even as he trains with the Earthquakes, and the Earthquakes will have to sort out the details of his visa situation, but Yallop, along with general manager John Doyle, hopes to have a deal worked out soon.

“We’d like to do something,” said Yallop. “It’s more positive than negative. Until players are signed and the league approves everything, they’re not on the team.”

A player more suited to playing central midfield, but one that Yallop is hopeful can be added to the roster, is Sierra Leonean Abu Tommy. The 23-year old was reportedly unhappy with Moldovan side FC Tiraspol and welcomed a move to MLS. He has played extensively throughout the slate of preseason games for the Earthquakes, and Yallop seems impressed with what he has seen.

“He’s done well,” said Yallop. “He had a very good preseason with us. He’s obviously a guy we’d like to keep, but it is out of our hands.”

Yallop is referring to the system of acquiring players from overseas that often involves transfer fees and other payments. Since the league handles the details of all player contracts, the Earthquakes can only wait to see if an agreement can be reached to bring Tommy to MLS.

The Earthquakes will look to fill all 30 spots on the roster, especially since the policy of previous seasons to award teams extra allocation money for used spots has been eliminated this year, and could even take on more than 30 players in the short term due to injuries to current salary-budget players. Those players not already mentioned who are still in contention to make the roster include: Colin Mitchell, Josh Suggs, Matt Fondy, Tommy Muller, Hunter Gorskie, Danchrisandre Delgado, and Alexandre Gonzalez Emerson.

“We have room to sign other players, so we’re still looking,” confirmed Yallop. “We have guys on the IR, so you can have the young guys in their spots.”

With the potential to carry more than 30 players on the roster, at least to start the season, the Earthquakes may not need to say goodbye to some of those trialists and draft picks that are desperately awaiting their fate with the club. And as he surveyed the walking wounded that were working out separately from their healthy teammates, Yallop quipped.

“We have plenty of spots!”