Nearly a 1000 season ticket holders and their friends gathered at the local Bowlmor to get their first glimpse of the 2013 San Jose Earthquakes. Team officials and players held a series of Q&As with fans that covered a wide range of material from the serious to the slightly offbeat. When not on stage, players mingled with the crowd, played air hockey and pool, and posed for countless photos. And of course, all the players made themselves available to sign autographs and say "Thank you!" to the same supporters that make Buck Shaw Stadium such a formidable place for opponents.

Steven Lenhart and Alan Gordon were there -- no truth to the rumor that they had morphed into one being, at least not yet -- and promised fans they hoped to be back on the training field in the next 2-3 weeks. Newly minted Designated Player Chris Wondolowski was the star attraction, but was still the humble and approachable man he has always been. Lenny certainly stole the show, sporting his curios new 'do -- should we call it The Cosmo Kramer? -- and was the last player to leave as he made sure to pose for photos with everyone who asked. 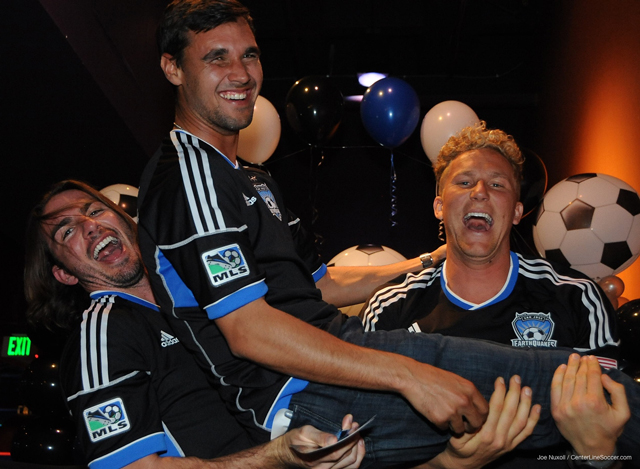 Centerline Soccer's own Joe Nuxoll was also in attendance, and when he wasn't rolling strikes on the lane 22, he was rolling through the crowd taking a ton of fabulous photos. Be sure to leaf through some of the highlights here, and relive the fun that was the 2013 March to Soccer season ticket holder party. And fans: if you have a good story to show, or some awesome photographs of your own, please share in the comments below.