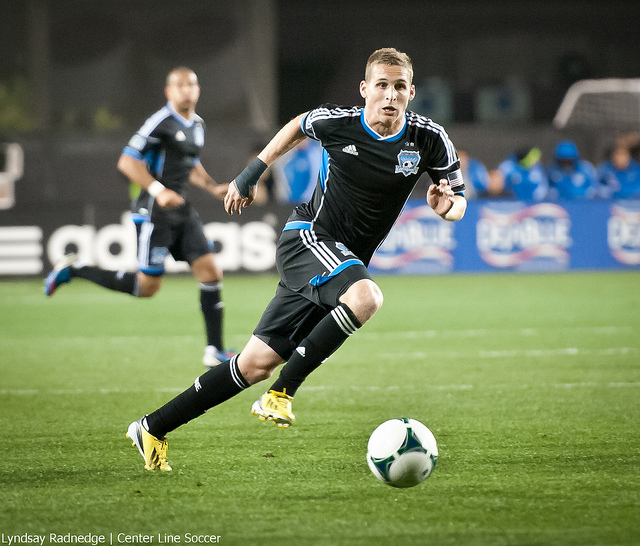 The injury woes continue for the San Jose Earthquakes as yet another potential starter looks to be headed to the infirmary this week, and a new face crops up hoping to fill the void.

During last Sunday’s match against Real Salt Lake, forward Mike Fucito picked up a hamstring injury but played through the ailment. By Tuesday it was apparent that head coach Frank Yallop would have to look further down his threadbare bench for another option against New York Red Bulls this Sunday if Fucito is not cleared to play.

Target players Alan Gordon and Steven Lenhart are both by their own admissions a few weeks away from being able to train fully with the team. Newly signed walk-on Alexandre Gonzalez Emerson saw plenty of action in the preseason, but he is very raw and not nearly ready to be thrust into an MLS game. So who’s left in consideration if Fucito can’t go?

“The two that come immediately to mind are Adam Jahn and Sam Garza,” said Yallop to Center Line Soccer. “I’d probably think Sam could start, he’s ready and a little further on in his career, so this could be his chance to shine. The games he had in the Open Cup and sporadically with us he has done well. If Mike can’t go and Sam gets the nod, we hope he can do well.”

Garza was drafted by the Earthquakes in the 2012 SuperDraft as a Generation Adidas signing out of U.C. Santa Barbara. And while he has trained primarily as a midfielder since his arrival in San Jose, Garza played as a forward for much of his college career.

“He may do better in that spot,” continued Yallop. “Perhaps he’ll be more comfortable in that roaming role where he can pick up a ball when he can. It’s not as structured as playing wide.”

Garza was arguably the player of the match in each of the first two rounds the Earthquakes played in last year’s U.S. Open Cup tournament, but that was playing as an outside midfielder. Making the transition to playing up top will not be straightforward for Garza, but he feels ready for the challenge.

“I’m excited for the opportunity,” Garza told Center Line Soccer. “I used to play forward all through growing up, so it is definitely a position I really like. I like making those quick runs behind defenders as well as hopefully playing people in. I just have to do my best, and I need to be ready for a faster game. I haven’t really played up top over the last two years and it is a different level in MLS.”

The second year Earthquakes did not have a very memorable rookie campaign, especially as injuries forced him to the sideline for long spells of the season, but his coach never lost faith in the former Gaucho, and is looking for a much bigger contribution from the player in 2013.

“I felt sorry for Sam, but he seemed to get injured at inopportune times last year,” said Yallop. “These weren’t niggles, he had broken ribs and a broken wrist, he done his ankle. But now he looks sharp and this is a good opportunity for him to grab his chances right now.”

Garza agreed that last year was difficult, as he totaled a mere but he pledged to put that all in the past and only look forward to how he can best contribute to the success of the Earthquakes.

“Last year was a bad year for me, up and down,” said Garza. “I thought I showed well in the U.S. Open Cup game, but it wasn’t enough for me and I need to be more consistent with my play. This year I’m a lot more fit coming into the season and I’m feeling ready to go. If Frank calls me in to play forward on Sunday, then I’ll be ready to go.”

Due to the lack of regular starters and substitutes on the bench against Real Salt Lake in the Earthquakes season opener, Jahn, Garza, and newly signed Cordell Cato all entered the game late, but were collectively unable to play the team back into contention. However, Garza does not feel the effort was for naught, as the playing time should help him prepare for the potential starting role against the Red Bulls.

“Having a year under my belt and knowing the pace of the game, I know how I need to prepare,” shared Garza to Center Line Soccer. “Before the game it is really important for me to be ready when I am needed. Against Real Salt Lake, coming in late I didn’t do too much, but I thought I was able to get some running in and I look forward to being more dangerous in this one. I am excited to play New York.”

So how has Garza been preparing for a possible start this Sunday at forward? And just how much has his soon-to-be strike partner Chris Wondolowski provided in terms of tutelage to the Quakes sophomore?

“I’ve been trying to learn from Wondo as much as I can,” said Garza. “It’s so much fun to watch him move around the field, and he’s such a hassle for defenders. He’s been talking to me about playing together, and it might be difficult at first as we feel each other out but I am excited to help him get as many chances as we can.”

For Garza, the opportunity to start for his team and pair up with reigning MLS MVP Wondolowski his him beaming from ear to ear. If he is able to translate that excitement into accomplishment on the Buck Shaw Stadium field this Sunday, then Garza will have more to smile about to start off this season.