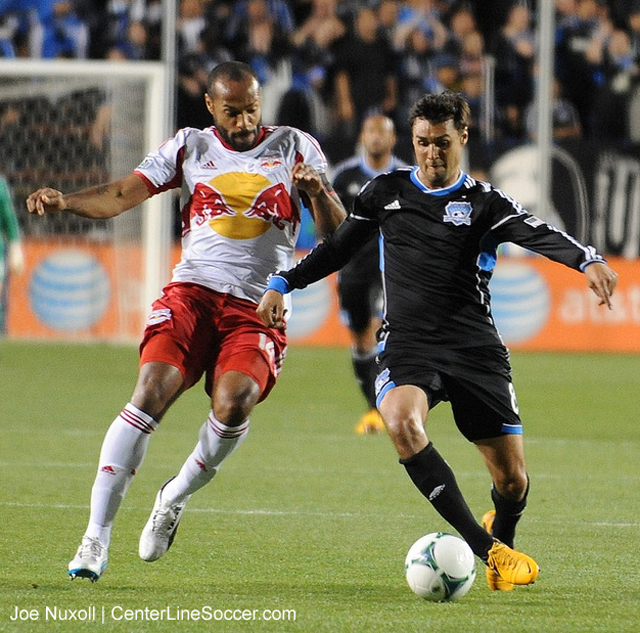 (Santa Clara) A new Goonie and a veteran lifted San Jose to their first win of the year Sunday night as the Earthquakes scored twice in the game’s final minutes to beat the New York Red Bulls 2-1. Adam Jahn, the 15th pick in the 2013 MLS Supplemental Draft, scored his first career MLS goal in the 83rd minute to tie the match before Chris Wondolowski gave San Jose all three points by converting a penalty kick in the 92nd.

“What a great finish by Adam, a terrific finish for a kid who’s playing his second game for us,” Frank Yallop said. “And, he made the second goal, too, with a great header that was going in anyway until the hand ball (a call that led to Wondolowski’s PK). I’m very proud of the guys. You think about the unit we had out there and the spirit was terrific. We deserved to win in the end.”

With a number of attacking players (Lenhart, Gordon, Chavez, and don’t forget Beitashour’s 6 assists last year) injured and unavailable to San Jose, Frank Yallop started the same eleven that faced Salt Lake in the season opener. Mike Fucito was paired with Chris Wondolowski at the top of a 4-4-2 that featured Ramiro Corrales and Shea Salnas on the wings, and Ty Harden at right back.

Fucito did little to cement his spot in the Earthquake’s line-up in the first half. He appeared to be in alone on goal in the 8th minute, only to have Jamison Olave recover to clear the ball away. Seconds later, Shea Salinas sent in a cross from the right corner that Fucito stabbed over the cross bar from close range.

The Red Bulls were missing veteran Brazilian midfielder Juninho (a.k.a. Juninho Pernambucano), who sat out with a calf injury, but they still had Thierry Henry and the French international started the play that led to New York’s taking a first half lead through an unlikely source.

Just past the quarter hour mark, Henry lofted a pass in to the penalty area that Jason Hernandez rose to deflect, and the ball fell to Eric Alexander at the far post. Alexander easily beat Jon Busch from 6 yards, scoring his first goal since 2010 (when he was a member of FC Dallas).

New York thought they had a second goal when Olave bundled in a Henry free kick  minutes later, but the Red Bulls defender was a couple yards offside. Fabian Espindola had an open header from a Henry corner kick, but bounced his shot wide of the left upright just before intermission.

“We started the game nicely, and then got sucker punched with the goal from the Red Bulls,” Yallop said. “We hung in there, and as long as you keep it at 1-0, you have a chance of getting back into the match. I think we did a nice job of that with Jon (Busch) and the back four working hard.”

The second half was very disjointed, with both teams making a lot of simple mistakes, and neither team able to find any kind of rhythm until San Jose shook things up late by bringing in some fresh young legs. Adam Jahn, Sam Garza, and Cordell Cato sparked the side to a comeback win.

“The three subs made a big difference in the game,” Yallop said. “They weren’t over awed by the situation. We needed some pace wide, and a bit of unruly running, and I think that worked. It opened the game up for us.”

The Earthquakes had not managed a shot in the second half until Cato fired wide of the left post in the 82nd minute, but for the remaining few minutes they owned the game. In the 83rd minute, Ramiro Corrales fed Sam Cronin breaking into penalty area, and Cronin’s driven cross was volleyed home by a lunging Jahn at the far post.

“A great run and ball by Sam,” Yallop said. “And a great finish by Adam. Lenny and Gordo were just saying, the new Goonie is here.”

And the Earthquakes weren’t done yet. Nine times last year (plus once more in the playoffs) the Earthquakes scored in second half stoppage time, and the boys in black showed that they were capable of such late heroics again in 2013.

With the game clock ticking past 90 minutes, Adam Jahn headed a Sam Garza corner kick towards goal, only to have it knocked down by the left hand of New York’s Roy Miller. Referee Ricardo Salazar pointed to the spot, and up stepped Chris Wondolowski to take the game deciding kick.

Wondolowski’s first effort was saved by the Red Bulls’ goalkeeper, Luis Robles, but again the referee went to his whistle. Roy Miller was called for encroachment, and Wondolowski was given a second chance.

“I think the keeper moved early as well,” Yallop said of the encroachment call. “Miller was right in on top of Wondo. He tried to put him off with the run.”

On Wondolowski’s second attempt, he caught Robles going the wrong way, and tucked it neatly well inside the right post to give San Jose the win.

“I’m always holding my breath (on penalties),” Yallop said. “It takes a cool character to take that second one after missing so I was very pleased for Chris.”

For New York, their record falls to 0-1-1 after failing to hold a lead for the second time in as many games. San Jose’s win levels their record for the year at 1-1-0 as they travel to Columbus to face the Crew next Saturday.

Note: As the teams took the field, the San Jose PR team was distributing press releases announcing the signing of 23 year old Sierra Leone midfielder Abu Tommy. The newest Earthquake watched the game from the bench.