After splitting a pair of home games to open the 2013 MLS regular season, the San Jose Earthquakes head out on the road to face the Columbus Crew.

The Earthquakes rebounded from a disappointing season opening loss to Real Salt Lake to defeat the New York Red Bulls in their second match of the year. San Jose returned to the recipe that in 2012 led them to the Supporters' Shield in pressuring their opponent relentlessly to close out matches. This time, it was Stanford University rookie Adam Jahn playing the part of hero in the Quakes 2-1 comeback victory over New York.

By Tuesday, head coach Frank Yallop had revealed that starting forward Mike Fucito had suffered a serious gash in Sunday's match that required multiple stitches. With Fucito unlikely to play on Saturday, Jahn could be in line to earn his first MLS start.

"It's one game, but we've seen enough in the preseason that he can play the position," said Yallop earlier this week. "Obviously, he is not always ready to be the man to start, since you never know how he going to handle things. I think he role right now is to make a difference."

The Earthquakes also welcome new signing Walter Martinez to the club, but the Honduran attacking midfielder is expected to contribute off the bench against the Crew.

"How we use these guys, we have to be good for 90 minutes," said Yallop. "As we proved last year, we don't always play all out top guys from the start. Off the bench we definitely need people that can change the game. We had that Sunday. We had 14 guys making a difference in the match."

The Crew will be making their home debut, and they have a pair of potent offensive players in Federico Higuain and Jairo Arrieta for the Quakes defenders to cope with.

"If we can get people around the ball, and make it difficult for them to find people, we will be okay," continued Yallop. "If we keep the confidence, keep the spirit going into Columbus, we hope to have a good away performance."

The match starts at 2:30 p.m. Pacific Time and can be watched on CSN Bay Area. The starting line-up is given below: 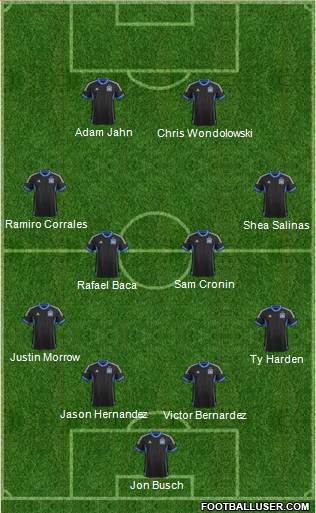