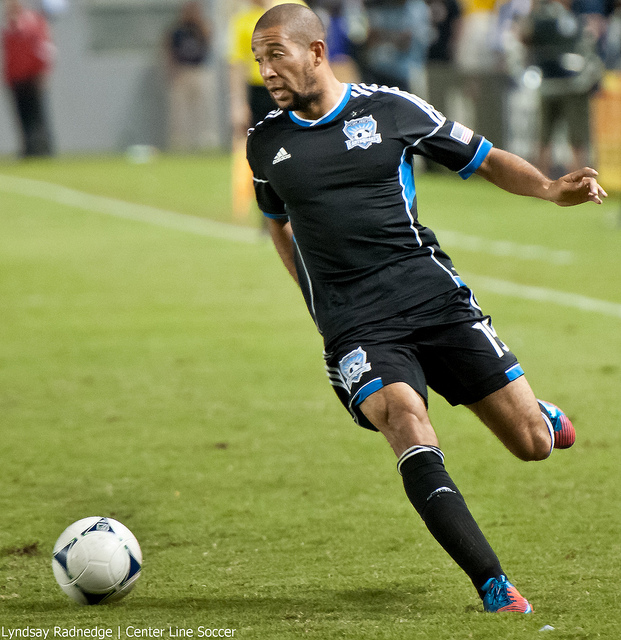 San Jose Earthquakes All-Star defender Justin Morrow was named to the U.S. Men’s National team on Monday ahead of two World Cup qualifying matches against Costa Rica and Mexico. According to a team press release, Morrow joined up with the U.S. squad in Denver on Sunday, one day after scoring the equalizing goal for the Earthquakes in a 1-1 draw at the Columbus Crew.

Morrow, along with Real Salt Lake’s Tony Beltran, is one of only two true fullbacks on the 23-man roster, and he is the only defender that plays as a left back on a consistent basis for his club team. U.S. head coach Jurgen Klinsmann acknowledged during a teleconference Monday afternoon that having so few options on the roster to play outside back could be an issue, but he was confident the guys chosen could step up and get the job done.

“There’s going to be a challenge, no doubt about it,” said Klinsmann to the assembled media on the call, “but bringing in Tony Beltran and Justin Morrow, they are two guys that play that position day in and day out and themselves they are doing very well. I had them both in the January camp, so I think they have the quality to come to the next level now.”

Klinsmann acknowledged that he could lean on some of the more experienced players on the roster — most notably from the midfielder corps — to drop back and be a part of the defensive back four, but he seemed confident that his selections would be able to handle the match against Costa Rica this Friday night in Colorado and next Tuesday against Mexico at Estadio Azteca in Mexico City.

“You only get experience if you play,” explained Klinsmann. “If you don’t have the experience yet, like Carlos Bocanegra (left off the U.S. roster for lack of playing time), then you’ve got to get your games under your belt and gain that experience. I think the players that are here for the upcoming challenges. They have definitely the qualities and definitely have the confidence to get the job done.”

Due to a significant number of injuries to more established U.S. Men’s National Team pool defender such as Fabian Johnson (hip), Edgar Castillo (facial fractures), and Steve Cherundolo (knee), Klinsmann looked to the players that showed well for him during last January’s winter training camp. He seemed to relish the fact that these newcomers would bring a high level of motivation to do their best for their country.

“The good thing about it is whenever someone can’t come in that is a huge opportunity for the one that is stepping in and wants to prove his point,” stated Klinsmann. “Another good thing is that we had a January camp where we had a closer look at quite a lot of players and that is why Tony Beltran and Justin Morrow are now in the picture.”

Morrow, 25, was a second round draft selection of the Earthquakes in 2010. After making 12 appearances in his first two years in San Jose, Morrow burst onto the scene in 2012 and made the position of left back his own. He scored his first goal for the Earthquakes as part of a 5-3 win over DC United and by mid-summer was selected to represent MLS in the All-Star match against Chelsea FC of the EPL. Morrow earned his first cap for the United States when he started the team’s 0-0 draw against Canada this past January.

“We worked with him in camp and we saw his strengths, we saw his weaknesses, but we saw a lot of improvement happening,” described Klinsmann. “And therefore we believe he is ready for another level, sticking his nose into international football and seeing if he can defend his man. So he comes in and has absolutely nothing to lose.”

Morrow joins eight other players on the 23 man roster that currently play in MLS. With the league just three weeks into a new season, it might be a concern that the players are still getting up to speed. However, Klinsmann has a lot of respect for MLS and is pleased to see the development of talents ready to compete at the international level.

“I think it is great to see when you look at a lot of players coming through the MLS system now,” said Klinsmann. “They are getting better and better and they are ready for another level. … Moving through the ranks and hopefully climbing up the ladder, that’s what Justin did over the last year or two.”

The German forward legend, who coached Germany to a World Cup third-place finish in 2006, did not reveal whether some of his less experienced roster choices, most notably Morrow, would see the field in either of the team’s two upcoming matches. With the U.S. off to a slow start in qualifying and not wanted to fall too far behind in the “Hexagonal,” Klinsmann has the unenviable task of determining who best to replace the plethora of injured players not available for this roster. Most importantly, the coach must balance to need for experience with the talent these replacements bring to the games.

“Experience is built over years and is definitely an important factor,” shared Klinsmann, “but the fact is a lot of these experienced players are injured or are not playing, and therefore this is the roster we have total trust in, and they will gain more experience by doing that.”

And how does Morrow fit into that equation? After all, the Earthquakes left back has spent very little time training in the colors of the U.S. National Team.

“We like his dynamic of the game,” Described Klinsmann of Morrow. “He’s technically very gifted: he can cut inside; he can go down the line. He is able to cover a lot of ground on the left flank. Certainly there is a lot of area for him to learn to be connected to the centerbacks and to understand his defensive role in more detail, and to always be communicating. So those are key messages we give him, but he definitely has a lot of talent.”

With Klinsmann recognizing that experience is earned from playing and not from watching, Morrow stands at the threshold of a chance to take his career up another level. And if the opportunity arises to play against Costa Rica and Mexico, and he is able to help the U.S. to a pair of positive results, Morrow may even set himself on the path to representing his country at the upcoming 2014 World Cup in Brazil.