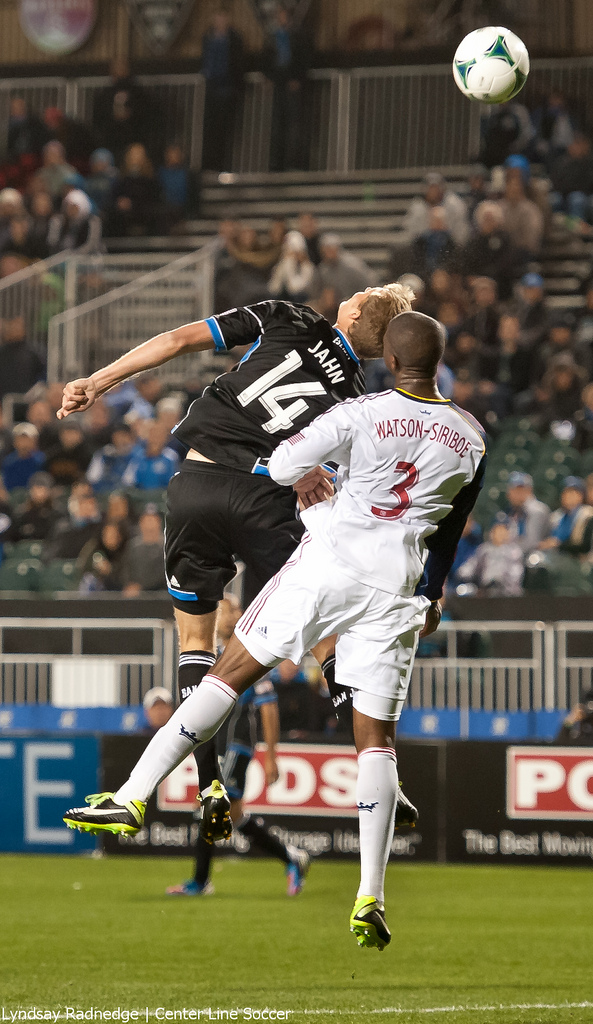 Despite a 2012 season during which they set Major League Soccer ablaze, racking up 72 goals and reeling in 66 points on the way to the Supporters’ Shield trophy, a complete absence of ego continues to permeate the San Jose Earthquakes camp.

That approach begins with forward Chris Wondolowski, who scored 27 of those league goals a season ago. For Wondo and the rest of this Earthquakes team, it’s all about winning. A ruthless efficiency and confidence sprang from this mindset, resulting in an incredible number of late-game goals last season and the fitting team nickname, ‘The Goonies.’

Though San Jose dropped its first match of the 2013 season, a 2-0 home defeat to Real Salt Lake on March 3, one week later they got right back to their late-game-winning ways, surging past New York Red Bulls 2-1 with two goals in the final 10 minutes.

Credit rookie forward Adam Jahn for sparking yet another comeback, and credit the team for fostering a climate where an unsung rookie can come in and contribute. After subbing in for midfielder Rafael Baca in the 66th minute — his second appearance of the season — it took Jahn just 17 minutes to knot the game at 1-1.

In the 83rd minute, ‘Quakes midfielder Sam Cronin used a blistering change of pace to shirk his defender and push into the Red Bulls penalty area.

As Cronin sent a left-footed cross sailing across goal, Wondolowski made a run to the near post, drawing several Red Bulls defenders in his wake. That freed up space for Jahn at the far post. The rookie timed his run perfectly and met Cronin’s cross with a right-footed volley into the roof of the net.

Then, in the 90th minute, Jahn met Sam Garza’s corner kick with a header that glanced off the arm of Red Bulls defender Roy Miller inside the 18-yard box, resulting in a penalty kick.

On Wondolowski’s second stab at the spot (the first attempt was called back for obstruction), he duly dispatched his effort. The game was over; the Earthquakes had won yet another game with last-gasp heroics — order was restored to the world. In this moveable feast, the actors change from match to match, but the script improbably, wonderfully, remains the same.

Jahn has drawn widespread praise for his timely runs and delicate technique — the latter which has earned him the moniker ‘Pillow Feet,’ for his cushioned first touch on the ball.

The technique came before the finishing, where Jahn is concerned. For all his prescient attacking abilities seen so far this season, Jahn didn’t begin playing forward until he was a junior in high school at Jesuit (Sacramento) and received an invitation to the United States U-18 team.

“I was always the biggest as a little kid, so I started out as a center back, up until I was like 12 or 13,” Jahn said in a phone interview. “Then I went up to defensive midfield for a few years, and a few years before high school and through high school I played attacking mid. I didn’t play forward until I played for the U-18 national team; I’d never been a forward until then.”

In Jahn, the national team’s coaches saw a player who fit the mold of the quintessential “target man” forward. He was big, he could hold the ball well, and his time in the midfield had steeped him in a technical understanding of the game. It was as a midfielder that he’d developed his passing and his excellent first touch — tools that serve him well as a striker.

Jahn attended Stanford, where he was a four-time all-conference pick (second-team for his first three seasons before cracking the first team as a senior) and continued his progression as a forward.

During that senior season, he scored 13 goals and produced 30 points for first-year head coach Jeremy Gunn, who came to Palo Alto from the University of North Carolina at Charlotte. In Jahn, Gunn saw a well of attacking potential waiting to be unleashed.

“I think the immediate thing we noticed is what a wonderful first touch he has,” said Gunn in a telephone interview. (Gunn was hired in December as an assistant with the Earthquakes Academy program, in addition to his head coaching duties at Stanford.)

“Then, we noticed what a great soccer IQ he has. From that, we realized he was a very good goal scorer as well. We felt we wanted to play him as far up [the field] as possible.”

With Gunn, the emphasis was always on attacking. “The most important thing is to play with a direction,” Gunn explained. “The thing we try and emphasize [at Stanford] is when we win the ball, we’ll try and score goals. Sometimes teams lose focus that there’s a goal at the other end of the field.”

“He brings a whole different mentality and energy to the game,” Jahn said of Gunn. “We defended in order to attack. He strongly emphasizes scoring goals. If you score more goals, you win.”

That approach fit perfectly for Jahn. He played as one of two forwards in Gunn’s 4-4-2 system, which resembled the formation used by the Earthquakes.

At Stanford, the two forwards were interchangeable — Jahn made consistent runs in behind opposing defenses to open up space, and showed a terrific finishing ability in front of goal.

“He was already a very accomplished soccer player, and I think college players have that extra kick their senior year, where they’ve learned so much and have more drive,” Gunn said. “His role also became a little bit different [during his senior year.] We put it to him to try and be as effective as possible.”

The transition to professional soccer didn’t come as too great a shock for Jahn. Gunn had instilled in Stanford’s players a voracious appetite toward game study. They’d study every aspect of a performance, incorporating the lessons learned to future matches.

“He broke down every part on the field in simple terms,” Jahn said. “It just became a matter of if you do your job, then we’ll have success. You don’t have to be a superstar to win the game. If we did the little things coach Gunn told us, we’d have good things start to happen.”

Stanford finished 9-8-1 (5-4-1 Pac-12), good for a third-place finish in conference play. Jahn provided the game-winning goal four times during the ’12 season, a perfect prelude to his future professional team.

After drafting Jahn this January, the Earthquakes coaching staff told him if he gave 100-percent effort and a showed a willingness to learn from the veterans, he’d get his chance.

Jahn looked to play simply in training and games, emphasizing one to two touches on the ball and spreading play quickly. In the ‘Quakes 4-4-2 formation, his role as a forward is specialized.

“The coaches want me high between the two center backs,” Jahn said. “I hold the ball, find the gaps, and let the smaller forward (Wondolowski or Mike Fucito) roam under me, and get the ball off me to break the other team down. You play to your strengths; I really like that.”

Yallop said after the New York match that San Jose’s offense is tailored for a tall, “target” striker who can hold possession and bring his teammates into the fold.

With last season’s excellent target men Lenhart and Gordon currently injured, Jahn ensures that the ‘Quakes can continue with their preferred offensive philosophy.

Training with forwards of Wondolowski’s caliber hasn’t hurt Jahn’s adaptation period, either. “With Wondo, you learn how to score,” Jahn said. “You watch him every day, practicing. Anything that comes his way he’ll put on target. I try to base my play off that. If you’re in the box, make a sharp run, and put a boot on the ball. He does that so well, and I try to mimic it. He’s been a great influence on me.”

So have Lenhart and Gordon. Lenhart is recovering from a meniscus tear in his right knee, Gordon from offseason hip and knee surgeries, but they chime in with pointers for Jahn during practice and games.

“It’s been great,” Jahn said. “We all understand that the team is bigger than any one player. The coaches will field the [players] that they think will give the best chance to win. Obviously for personal reasons we hope we’re in, but if not, it’s for the best of the team, and everyone understands that. There’s no bad blood; you accept the coach’s choice. If you’re chosen, you give it your all to win the game. And when you have everyone on board like that, you have a season like last year. I hope we can repeat that success this year.”

Gunn was away recruiting in Southern California ahead of the game against the Red Bulls, but he drove back up in time to watch it. Jahn’s parents were also in the stands that night, after making the trip south from Jahn’s hometown of El Macero.

In some 25 minutes, Jahn succeeded in turning the game on its head, and creating some indelible memories. Afterward, he was able to bask in the inimitable glow that accompanies a victory at Buck Shaw Stadium.

“It was a great moment to see him walking around with the game ball with a smile from ear to ear,” said Gunn. “He was happy and excited. Those moments are special when you’ve worked with somebody.”

Jahn earned a start against the Columbus Crew on Saturday, and went the whole 90 minutes in a 1-1 draw. The Earthquakes have four points on the season — two points behind the Vancouver Whitecaps, who currently rest atop the Western Conference standings with a game in hand.

It’s been a rip-roaring start to Jahn’s professional career, but Gunn recognizes that there’s a ways to go yet. There’s more to personal growth than accomplishment.

“Jahn’s next step is … he’s had a great beginning, got some recognition … and he needs to have his feet on the ground,” said Gunn. “There will be pitfalls as well as highs on the path to success. And he understands that.”