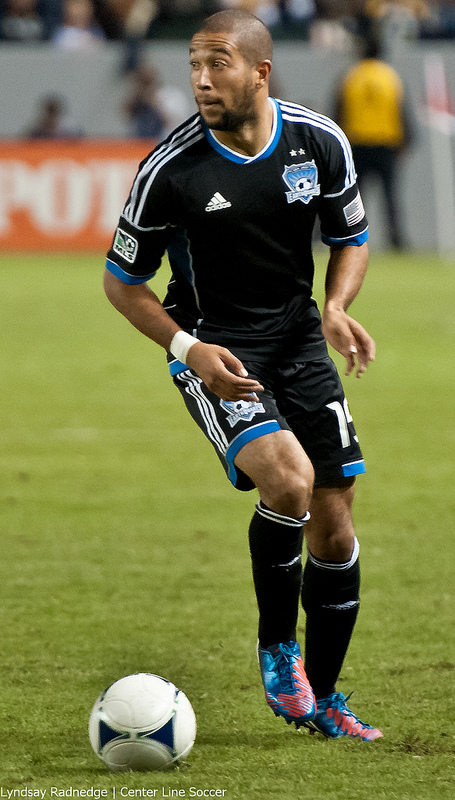 Traveling by air can be a drag, especially when the trip takes you across the vastness that is the MLS landscape. Interminable long layovers in far-flung airports only add to the disgruntlement that a swift path home has been delayed.

But for Justin Morrow, returning to the Bay Area a day after helping his team earn a point at the Columbus Crew, a prosaic stop along the way soon turned joyous for the San Jose Earthquakes defender.

“I feel like it all happened so quickly,” recalled Morrow earlier this week from his Colorado hotel room. “We had a layover in Phoenix when I turned my phone on and had a missed call saying they were bringing me in. I don’t want to say I was in shock, but I was surprised and honored that he was thinking of me and I am so happy to be here.”

“Here” was head coach Jurgen Klinsmann’s training camp ahead of the U.S. Men’s National Team’s two crucial World Cup qualifying matches. The Earthquakes defender had barely enough time to collect the congratulations of his teammates before he had to collect his belongings and make a quick turnaround from San Jose back east to Denver as one’s of Klinsmann’s selections to the 23-man roster that would soon do battle with Costa Rica and Mexico.

“If I have the opportunity to play in these games, they will rank above everything I’ve done to date,” said a grateful Morrow. “Helping your country qualify for the World Cup: there’s nothing more important and nothing better I can do in my career. Without putting undue pressure on myself, these are massive games.”

For Morrow, two massive U.S. qualifiers would cap off an amazing 12 months that has seen the Notre Dame graduate go from emergency centerback starter for his club, to a midsummer All-Star starting assignment against reigning European champions Chelsea FC, and ultimately a Supporters’ Shield finish to the MLS regular season. Morrow’s impressive 2012 campaign was rewarded with an invitation to Klinsmann’s January training camp, and the fourth year Earthquakes player made the most of the opportunity to impress the U.S. coaching staff.

“We worked with him in camp and we saw his strengths, we saw his weaknesses, but we saw a lot of improvement happening,” described Klinsmann during a teleconference earlier this week. “And therefore we believe he is ready for another level, sticking his nose into international football and seeing if he can defend his man. So he comes in and has absolutely nothing to lose.”

When the U.S. selections were announced to the public on Monday morning, Morrow joined Real Salt Lake’s Tony Beltran as the only natural fullbacks on the roster. The two MLS players participated in the nearly month long year opening camp, and at its conclusion they both earned their first caps for the national team as starters in a scoreless draw against Canada. Neither player was on the roster that traveled to Honduras in February only to lose 2-1 against Los Catrachos to open up the final round of CONCACAF qualifying for the 2014 World Cup.

Not two months on from his first experience wearing a U.S. shirt, that Morrow could possibly be called upon to play the flank for a team that has struggled out of the gate in the Hexagonal serves only to increase the intensity of the spotlight that now shines on the Earthquakes starting left back. Injuries to more established U.S. international fullbacks Edgar Castillo and Fabian Johnson have opened the door for Morrow, but he welcomes the challenge presented him by Klinsmann.

“When we were in January camp, he let all of us know that there are a lot of games this year,” said Morrow. “We are a part of something bigger, we’re not just part of this January camp, and that there will be chances for guys to come in and fill roles. If I can do that and help the team get points wherever that might be, if I play two minutes or if I play all of the minutes, whatever my role can be to help this team out, to help the U.S. qualify would be amazing.”

The Earthquakes put together a dream season in 2012, and numerous players enjoyed breakout years for the MLS regular season table toppers. Fellow Quakes Chris Wondolowski and Alan Gordon (USA), Victor Bernardez and Marvin Chavez (Honduras), and Nana Attakora (Canada) have all received caps from their countries since the beginning of last year. Morrow 2010 MLS SuperDraft classmate has been a part of two of the most recent U.S. national team camps and is waiting his chance. For Earthquakes head coach Frank Yallop, the accolades his charges have earned have not been unwarranted.

“You can’t ever stop success,” the 2012 MLS Coach of the Year said earlier this week. “For me, when our players get called into the national team, we are doing our job.” And wearing the smile of a proud father, Yallop added, “I’m really proud of the guys that we’ve gotten to a point in their games when other people are recognizing them.”

For Cleveland native Morrow, as hard a worker on the training field as any player on the Earthquakes, the road to success that has led to this point was not without its speed bumps. For spells during his rookie and sophomore campaigns, Morrow was sent out on loan to lower division side FC Tampa Bay as San Jose tried to find him opportunities to play. By the tail end of the club’s disappointing 2011 season, he was ensconced as the starting left back and began to show signs of comfort in Yallop’s tactical set-up. Against DC United in May of 2012, Morrow scored his first MLS goal in a 5-3 victory in front of an appreciative crowd at Buck Shaw Stadium. From that match forward, he has never looked back.

By all accounts, Morrow was one of the stars of Klinsmann’s January national team training camp. Whispers from observers staked out around the training fields at the Home Depot Center in Carson told of the impressive left back that looked a natural in his U.S. red training kit. Fellow Earthquake Wondolowksi, who was also hoping to establish his national team credentials in that camp, knows first hand just how tough a defender his teammate can be, and was very pleased to see Morrow recognized for his potential.

“I’m absolutely thrilled for him,” said Wondolowski when the U.S. roster was announced earlier this week. “I think he absolutely deserves it. I was lucky enough to experience January camp with him and he showed unbelievably. He was one of the best players out there and I think he definitely deserves it. His play over the last year or two has definitely shown it. I couldn’t be prouder of him, and it couldn’t have happened to a better guy. I think if he does get the opportunity to play he can make a difference.”

Watch: Justin Morrow talks about his experience training with the national team in January

His national team debut against Canada was efficient, though not spectacular, but it provided the 25 year old a good taste for the international game. Morrow was not often tested on defense, but he held his own and earned plaudits from the coaching staff for his level play.

“We like his dynamic of the game,” described Klinsmann of Morrow’s performance and what he can offer the U.S. “He’s technically very gifted: he can cut inside; he can go down the line. He is able to cover a lot of ground on the left flank. Certainly there is a lot of area for him to learn to be connected to the centerbacks and to understand his defensive role in more detail, and to always be communicating. So those are key messages we give him, but he definitely has a lot of talent.”

And as equally important as the talent he possesses, so too is the make-up of Morrow’s character. His coaches and teammates in San Jose never seem to have a bad word to share about Morrow, and the only criticism he gets from Yallop comes when he feels the defender is perhaps being too tentative on the field: “I said to him that ‘You’re an attacking fullback. You’ve got to make a difference.’” With that message taken to heart, Morrow scored the equalizing goal for the Earthquakes in last weekend’s 1-1 draw against the Crew.

“I’m still developing in my career,” admitted Morrow. “I’m still at the point where I am showing everyone what I can do. I see it as taking one step at a time. You can’t think past the opportunity that you have put in front of you and that is definitely the mentality I have.”

That opportunity could come as early as today when the U.S. takes on Costa Rica in front of a packed house at Dick’s Sporting Goods Park in Commerce City, Colorado, and perhaps even at historic Estadio Azteca in Mexico City next Tuesday. Whether Morrow sees the field or not for his country these next few days, he is guaranteed to show Klinsmann that his selection was not a mistake and that he belongs in a U.S. uniform.

“If I play in these games,” said Morrow, “or only in the practices, it will give me the chance to show everyone what I can do and how well I can click with the team. He knows that no matter what happens I’m a fighter and for these games that’s what you need.”

Tough enough and talented enough to survive the Hex and help the U.S. advance to the World Cup finals?

“It’s one step at a time,” continued Morrow, “but we’ll get there.”