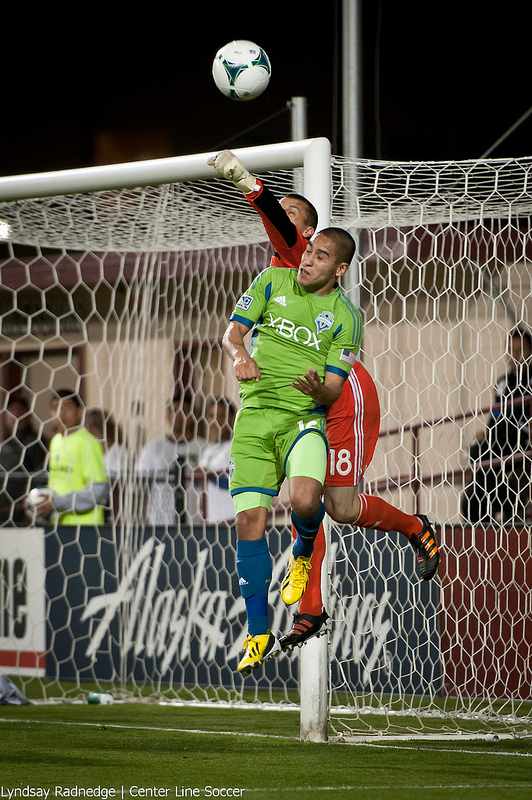 SANTA CLARA, Calif. — A new MLS season for rivals San Jose and Seattle, but a familiar result, as the Earthquakes collected a 1-0 victory over the visiting Sounders at a sold out Buck Shaw Stadium Saturday night.

A superb goal from star striker Chris Wondolowski just seconds into first half stoppage time was the difference as the Quakes beat Seattle for the fourth straight match stretching back to the start of 2012. For Wondolowski, it was his third game winning goal against the Sounders in the streak.

“He missed the two easy ones early, but he scored the real hard one,” said head coach Frank Yallop. “That’s Wondo: he doesn’t drop his head, he always feels he’s going to score.”

Wondolowski’s goal earned the Earthquakes their second victory of 2013, but it was the team’s defense that was instrumental in preserving their first clean sheet of the year.

“The defensive unit was great tonight,” continued Yallop. “Seattle had some chances, but we played very well and I thought we deserved to win the game.”

The makeshift San Jose back four — three first-choice starters were missing either due to injury or international duty and replacements Dan Gargan and Nana Attakora were making their season debuts — could easily have been the squad’s Achilles heel against the Sounders. Instead, playing with a cohesiveness that belied the little time they had shared together on the field and in training, the defense remained resilient throughout the second half as they clung to their one goal lead.

“I can’t say enough good things about all the guys in front of me,” said goalkeeper Jon Busch. “From the first to the back, everybody defended. It was awesome. It was very awesome.”

Busch himself was a hero on the night as his amazing double save late in the match denied the Sounders an equalizer. For goal scorer Wondolowski, a regular recipient of accolades and Saturday night’s box score hero, his goalkeeper was most deserving of Man of the Match honors.

“Buschy, hands down,” declared Wondolowski. “He threw up a zero and made some amazing saves.”

Since suffering a loss in their season opener, the Earthquakes have rattled off a three game unbeaten streak and have climbed into the upper half of the Western standings. Up next for San Jose is a trip to BBVA Compass Stadium to face last year’s Eastern Conference champion Houston Dynamo.

Despite fielding a starting eleven devoid of five top choice players, the Earthquakes stormed out of the gate and made the game difficult for visiting Seattle.

A free kick awarded to the Quakes in the 12th minute was quickly taken by Ramiro Corrales and floated into the Seattle area. With the Sounders’ defenders stationary, Wondolowski was caught between two thoughts as he neither volleyed nor headed the low delivery with his first touch. Instead, the defense reacted in time to snuff out the play before Wondolowski could attempt a shot on target.

In the 43rd minute, in a similar situation as before, a set piece opportunity for the Earthquakes looked sure to pay off. From deep on the right wing, Shea Salinas lined up a free kick and sent a low cross just beyond the Seattle back line. Wondolowski shook off his marker and sent a snap header toward the near post. With goalkeeper Michael Gspurning beat, the ball bounced agonizingly close to the target and out of play for a goal kick.

Third time was a charm for Wondolowski, as he expertly trapped Busch’s long ball, flicked on by defender Jhon Kennedy Hurtado as he battled Adam Jahn in midfield, and turned his first touch toward the center of the field. As the clock signaled the start of first half stoppage time, Wondolowski lashed a right footed shot that curled around Gspurning and caromed off the inside of the far post — the same post he had narrowly missed two minutes earlier — and the Earthquakes celebrated a 1-0 lead.

With his first goal from the run of play in 2013 under his belt — he notched his first goal of the MLS season from the penalty spot in the Quakes 2-1 win against New York two weeks ago — Wondolowski nearly doubled the home side’s lead at the start of the second half after some nifty footwork from Salinas freed the goal scorer at the top of the area. Wondo uncorked a shot that forced Gspurning to punch the ball over the crossbar.

In the 62nd minute, on the second of successive corner kicks from San Jose, defender Ty Harden’s hustle play on a loose ball in the area allowed him to slide onto a shot. With Gspurning leaning one direction, the shot looked destined for the goal, but teammate Attakora, retreating from the goal line, impeded the shot and it deflected to safety.

Sustained pressure on offense from the Earthquakes in the 70th minute was nearly rewarded with a goal as a heads-up play from Corrales kept a loose ball alive in the Sounders’ area. With space to collect the lifeline, Rafael Baca fired a one-timed volley that flew mere inches over the crossbar.

Three minutes later, Wondolowski nearly had a double as he was the first to pounce on a Gspurning save from a Salinas rocketed 20-yard shot. With the Sounders goalkeeper scrambling to get back into position, Wondolowski blasted a shot from a tight angle and found only side netting.

Desperate for an equalizer, Seattle pushed forward with numbers over the last quarter hour of the match. In the 75th minute from the top of the area, Mauro Rosales unleashed a shot that goalkeeper Busch was able to get in front of at the near post. The rebound landed with David Estrada, but the Salinas native’s follow-up was parried away by Busch.

In the 84th minute, Harden gifted the Sounders an opportunity when his back pass was weakly taken. Estrada raced after the loose ball but was beat to the ball by Busch. The Quakes ‘keeper was well outside his area as he sent clear the dangerous ball.

Clinging to a 1-0 lead and with the game into stoppage time, Corrales had a chance to salt the game away when he collected a breakaway behind the Seattle defense. With only Gspurning to beat, the last remaining MLS Original sent his low shot crashing into the goalkeeper and out for a corner kick.

Less than a minute later, Referee Baldomero Toledo pointed to the center circle to signal the end of the game and the Earthquakes second consecutive home victory of 2013.