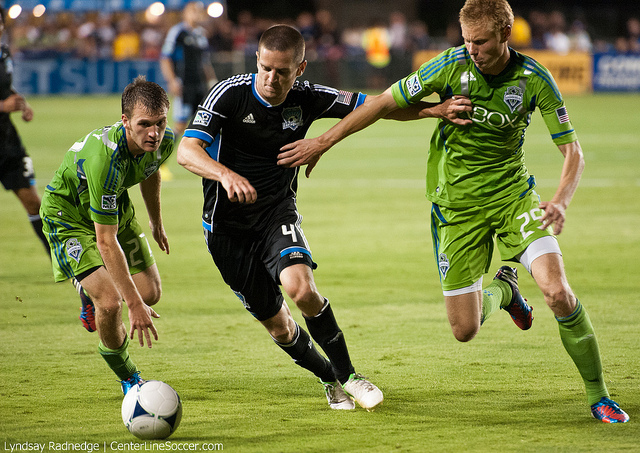 The following is an article that will appear in the San Jose Earthquakes MatchDay program distributed at Buck Shaw Stadium for the home opener against Real Salt Lake. Be sure to pick up a copy or two, and if you like what you read, please share in the comments below.

“You’d like to have eleven Sams out there…” — Chris Wondolowski

On a team that thrives on its no-nonsense, blue-collar dedication to the game, no player more exemplifiers that ethos than Sam Cronin. Trusty #4, camped out as a defensive midfielder, Cronin brings a professionalism and commitment to the San Jose Earthquakes that his teammates find inspirational.

“He’s the heart and soul of this team,” described forward Chris Wondolowski. “He works hard and does the little things on and off the field that are so important for us.”

The second overall pick in the 2009 MLS SuperDraft by Toronto FC, the Wake Forest product had a solid rookie campaign and looked worthy of his high selection status. However, early in his sophomore season, Cronin was determined to be surplus to the cause in TFC and he was quietly traded to the Earthquakes for allocation money.

Through the lens of hindsight, the deal was very lopsided in favor of the Blue and Black. Since his arrival in San Jose on the day of the 2010 summer solstice, Cronin has been a mainstay in head coach Frank Yallop’s preferred Starting XI. Collecting a seemingly pedestrian 1 goal and 8 assists over the past three seasons with the Earthquakes, Cronin’s contribution to the stats sheet may look unimpressive, but his impact on a game does not go unnoticed.

“You see how much ground he covers,” continued Wondolowski. “He breaks up passes and makes tough tackles, but yet he is so technical and plays in great passes. He keeps us ticking out there and is a great component of our team.”

Scour the highlight reels from Earthquakes games past, and Cronin is rarely front-and-center in the action. Certainly his lone Earthquakes goal, a game-tying effort against the LA Galaxy in last year’s California Clasico at Stanford Stadium, was massive, but otherwise he doesn’t exist in the camera’s frame.

But that is fine by Cronin. In last season’s run to the Supporters’ Shield, the midfielder was inarguably crucial to the team’s success. He did the proverbial “dirty work” that was required between the defense and the offense lines, and coach Yallop at times was impressed enough to exclaim that Cronin had “bossed the midfield.” And that was sufficient for Cronin, as he was not slighted at all at receiving little in measure the credit, say, a goal-scoring forward or creative attacking midfielder might garner. Suffice it to say, Cronin’s role is one defined by its anonymity.

To put it in perspective, if we were talking about the NFL, Cronin would be one of the linemen battling it out in the trenches along the line of scrimmage, setting up the play for the star quarterback. In basketball terms, he’d be the small forward looking more to assist than to score, all the while never forgetting his responsibilities on the defensive side of the ball. He’s always there for the Earthquakes, but often only the most astute observers discern his contributions.

“You’d like to have eleven Sams out there,” confessed Wondolowski, “giving their all on every play. He brings so much to the team and really reflects what this team is about.”

The Earthquakes are not about star players but about complementary players. They trust one another on the field and know that they can shine within that context. Since being joined in the midfield by Rafael Baca midway through the 2011 season, the partnership between the two has developed into one of the best in MLS. They have elevated each other’s performances through their cooperation on the field.

The powers that be with the Earthquakes have certainly taken notice of the four-year MLS veteran. Cronin was awarded a new contract this past offseason and is expected to anchor the center midfield position for many seasons to come. His responsibilities with the team remain the same — shepherd the defenders and link the ball to the wingers — and his drive to improve his on-field leadership continues. At only 26 years old, he is entering what should be his best years as an athlete.

And so the 2013 season begins with high expectations for the club, and another run to the playoffs is on every player’s mind. Each one knows what needs to be done to make that happen, Cronin included. You may not find his name among the statistical leaders for the team this season, but he’ll be without a doubt getting the job done. After all, he is a true San Jose Earthquake.

Robert Jonas is a writer for CenterLineSoccer.com and SJEarthquakes.com. Send him feedback on Twitter: @RobertJonas