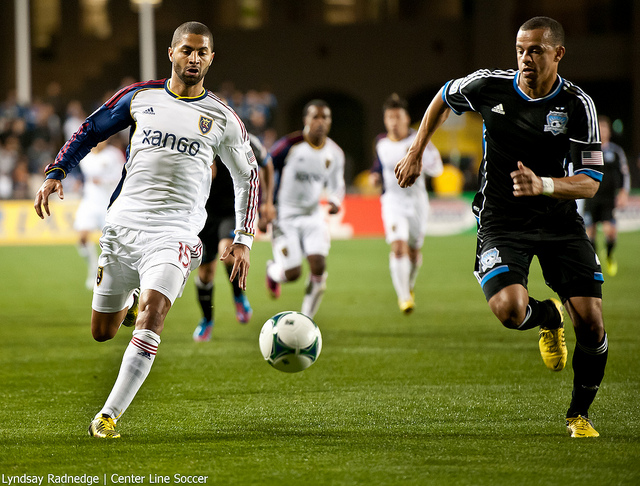 The San Jose Earthquakes fell to visiting Real Salt Lake 2-0 courtesy of a brace from Alvaro Saborio in a performance that was reminiscent more of the disappointing 2011 season rather than the record-breaking 2012 campaign.

Playing without a host of regular starters currently sidelined with a number of injuries, the Earthquakes looked the better team for long stretches of the match, but they were undone by a combination of missed scoring chances and untimely shoddy defense. The 2-0 decision to RSL was in stark contrast to last year when the Quakes won all three meetings between the two clubs. The result also represented their first MLS regular season loss at Buck Shaw Stadium since August of 2011.

“The goals we conceded were not good,” said head coach Frank Yallop. “Good finishes, but we need to do better than that to win games.”

Salt Lake did their damage in the second half following a first half that saw the visitors survive a half dozen squandered Earthquakes scoring opportunities.

“We created enough chances to score more than one or two goals but didn’t take them,” added Yallop. “They didn’t defend well in the first half and we should have punished them.”

For RSL, the victory was a measure of revenge for a 5-0 loss they suffered in San Jose last July 14. Chris Wondolowski scored a hat-trick in that match, but in this match was unable to break through against a stingy Salt Lake defense. Often playing with a very frustrated look on his face, but admirably bearing the burden of recently being elevated to Designated Player status, the reigning MLS MVP was contrite in rating his performance.

“Horrible finishing by me,” said Wondolowski. “I had four point-blank chances and didn’t put any of them on frame. If I finish those chances it’s a whole different game and we’re cruising after that.”

Instead of rolling to a comfortable victory in front of a raucous sold-out Buck Shaw Stadium, the Earthquakes forward duo of Wondolowski and Mike Fucito combined to generate seven quality scoring opportunities. But with the game crawling into the last twenty minutes, it was the visitors creating havoc on offense. Barren on the offensive side of the ball, the Quakes at two inopportune times after the 70th minute were porous on defense.

“We’re not going to feel too bad about ourselves,” said centerback Jason Hernandez. “We were really dangerous offensively and created a lot of chances. Soccer is a cruel game sometimes, and we played well enough to win, but unfortunately they made some bigger plays tonight.”

The start to the regular season won’t get any easier for these Earthquakes, as they return to action this Sunday against the New York Red Bulls. For Wondolowski and Fucito, the nationally televised match will offer them a chance to atone for their efforts in the loss to Real Salt Lake.

Be sure to view Joe Nuxoll's photo gallery from tonight's match

The atmosphere to start the match was electric, as a packed Buck Shaw Stadium enthusiastically welcomed the 2012 Supporters’ Shield winners back to the pitch. Resplendent in throwback Earthquakes jackets, the players quickly disbanded following the pregame team photo to get things started on their quest for the 2013 MLS Cup.

Neither team started brightly, as the changes each coach had to make to his preferred starting XI took a short while to show tactical cohesion. The Earthquakes looked intent on routing the offense through winger Shea Salinas while RSL seemed content to soak up the pressure in their defensive half.

“You try to pick a team that is going to get the job done,” said Yallop, “and to be honest we played well. I thought Shea was a big part of that. The plan was to get him the ball as much as we could, feed him and let him do his thing because he’s a good dribbler. We created enough chances to score at least one or two.”

“Shea’s very dangerous,” added Wondolowski. “He has a lot of speed and can get crosses in so we’re going to rely on him to get a lot of that service in. It’s always nice to have that on the wings.”

“I was happy when I did create but I was a little frustrated,” said Salinas. “I thought I lost the ball a little bit too much tonight.”

After an opening quarter hour when each side was testing out the other, Wondolowski nearly opened the scoring with a pair of quality opportunities. On the first of successive corner kicks in the 14th minute, the Earthquakes talisman attempted a side volley near the back post, but the shot was deflected out to safety. On the restart, a loose ball fell to Wondolowski just outside the six-yard box, but his shot was partially blocked by defender Tony Beltran and palmed off the crossbar by goalkeeper Nick Rimando.

“If I had those chances in years past, I can put those chances away,” said Wondolowski. “It was horrible technique, horrible execution, and I let the team down.”

A counterattacking sequence in the 21st minute found Ty Harden with space to roam just inside the RSL half, so the defender brought the ball toward goal. With Salinas pulling the near side defender toward the sideline, Harden spied Fucito cutting across the top of the penalty area and sent in a low pass. Fucito stepped over the entry pass, which allowed Wondolowski to return a perfect ball into the area for his forward partner, but Fucito missed his low shot to the far post.

“We had a great combination play, but it is a game of inches,” said Fucito. “If I bury that chance it changes the game so that’s something I’m going to look to improve on. Obviously, it was the difference today.”

“If you watched the game anyone could tell we were pretty dangerous out there,” said Wondolowski. “We created a lot of opportunities. If you give us those chances again, we’ll at least put them on frame.”

Jon Busch saw his first action of the match in the 24th minute, as a well struck ball from RSL’s Luis Gil required the veteran ‘keeper to paw the ball from danger. In the 41st minute, Sebastain Velasquez sent in a knuckling shot from 25 yards that Busch punched to safety.

Visiting Salt Lake, with former Earthquake Khari Stephenson in the midfield, was unable to mount much of a challenge on the home side’s defense through the remainder of the first half and the teams entered the locker room in a scoreless tie.

A choppy start to the second half saw neither team threaten to score, and numerous flare-ups disrupted the flow of the game. In the 58th minute a San Jose free kick was quickly taken by Salinas and found an uncontested Wondolowski gliding into the area. With his back to goal the newly minted Designated Player attempted to back header, but the shot drifted wide of the target.

The teams traded yellow cards midway through the second half as Kenny Mansally was cited for delay of game and Victor Bernardez was adjudged to have taken down forward Robbie Findley on an RSL counterattack.

Real Lake broke the deadlock in the 71st minute on a quick change of possession. After he received the ball just inside the Earthquakes half, second half substitute Joao Plata lifted a ball toward the center of the field. Costa Rican forward Saborio raced past Hernandez to get to the ball first, and he calmly slotted a shot past a helpless Busch to make the score 1-0 RSL.

“They played a ball long and credit to Saborio, he took a really great touch and brought it down in stride and caught us on our back foot,” said Hernandez. “When I look back at it, I don’t think we were necessarily in bad spots, we were pretty well covered. Sometimes you have to give credit to good players and a good team.”

Down a goal and hoping to capture some of the late-game magic that defined the team in 2012, Yallop brought in a pair of young, speedy wingers to replace veterans Salinas and Ramiro Corrales. Soon after, Adam Jahn, the tall rookie forward from Stanford University, made his Earthquakes debut. But these were not the same battle tested players that provided so many late game heroics in 2012.

“The depth gets hit,” said Yallop. “No disrespect to the players that came on because they are good players but to expect them to really change a game when we needed them to would be very difficult.”

Instead of conjuring up a comeback, San Jose soon fell down 2-0 through Saborio. With space to maneuver atop the penalty area, Kyle Beckerman toe-poked a perfect pass into the path of Saborio, and the burly forward turned and fired a left footed shot past a diving Busch.

“On a different night our shape holds up,” said Hernandez, “and we’re able to keep them off the board and get a clean sheet.”

The Earthquakes, much to the disappointment of the sold out Buck Shaw Stadium, failed to challenge Real Salt Lake the rest of the way in a manner reminiscent of the 2012 Goonies. In the 89th minute, Wondolowski again had a great chance on goal but, perhaps with the pressure of being the Quakes DP weighing on him in a game he had previously failed to deliver, saw his shot from just inside the corner of the penalty area scuffed well wide of the target.

“I think he sets his standards exceptionally high,” said Hernandez. “We’ve come to know him as a guy that every time he steps on the field that he’s going to make magic happen and impact the game. That’s the standard he holds himself to and around the field we take our cue from him and hold ourselves in the same regard. He puts a lot of pressure on himself to get on the scoreboard and to carry us and it’s worked so well so far so we’re not going to change that formula.”

Through five minutes of stoppage time, the Earthquakes could not threaten Rimando in goal and the match ended with the visitors victorious. San Jose will next face the New York Red Bulls on Sunday with a chance to reverse their fortunes and earn their first points of the early season. And front and center in that endeavor will be the Quakes MVP as he will look to rebound from a night of missed opportunities.

“We all know Chris Wondolowski is going to score goals, just because it didn’t happen on night one doesn’t mean he is not going to get his 20 goals this year.”