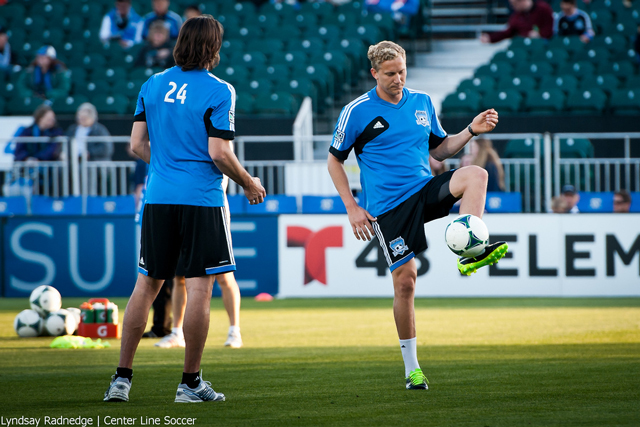 Since moving into BBVA Stadium early in the 2012 season, the Houston Dynamo have provided a less than hospitable welcome to their opponents. That continued with Saturday’s convincing 2-0 win over the San Jose Earthquakes, as the Dynamo extended their unbeaten streak at BBVA Compass Stadium to an MLS record tying 34 matches over all competitions.

First half goals from Will Bruin and Giles Barnes paced the defending Eastern Conference champions over the defending MLS Supporters’ Shield winners. Chris Wondolowski, who made his 100th career start as a member of the Earthquakes, had the best scoring opportunities for San Jose, but he was unable to convert. The Dynamo remains the only current MLS franchise — including the Quakes — that Wondolowski has failed to score against in his career.

“Houston played well,” said Wondolowski. “They came out and put us in a hole early. Especially playing here, if you put yourself in a hole, it makes it a lot harder to play. We couldn’t quite find that final touch; I hit a cross bar, missed one across the six… it was just one of those games.”

Coach Yallop made two changes to the starting eleven that defeated the Sounders last weekend as he welcomed back defenders Justin Morrow and Victor Bernardez from international duty. The new line-up was pressed early by the Dynamo and they failed to make the necessary adjustments to continue the Quakes defensive shutout streak.

“It’s disappointing to lose the match,” said Yallop. “I think we didn’t start well at all. We weren’t ready to compete for the first half hour and we got punished for it.”

In the 17th minute, after Houston goalkeeper Tally Hall sent a long ball deep into San Jose territory, Honduran international Oscar Boniek Garcia collected a headed pass deep in the right corner. Turning toward the area, Boniek Garcia dribbled the ball through the legs of Morrow and delivered a dangerous cross into the area. Dummied by Ricardo Clark, which drew the attention of Bernardez, the pass found Bruin at the penalty spot and his uncontested shot beat Jon Busch for the match’s first goal.

Minutes later, Bruin had a chance to double the Dynamo lead, but his low shot was expertly saved by a diving Busch. The Houston midfield, which dominated the Quakes midfield for much of the first half, continued to deliver pressure on the San Jose defense.

The visitors righted the ship and looked certain to head into the halftime break down a single goal, but an unfortunate play near the center line in the 42nd minute allowed the home side to take a 2-0 lead. After tracking a loose ball in the midfield, Shea Salinas tried to push a pass forward to Ramiro Corrales, but the ball deflected off of referee Jose Carlos Rivero directly to Houston’s Adam Moffat. The midfielder pushed the ball forward to Brad Davis, and the Dynamo All-Star, presented with ample time to set up a pass, floated a cross into the area. Busch rushed out to try a catch save, but he was beaten to the ball by Barnes who nodded home for a 2-0 Houston lead.

Weathering a dominant Dynamo attack and down two goals, coach Yallop made a pair of changes midway through the second half. Mike Fucito and Cordell Cato replaced Adam Jahn and Rafael Baca respectively and the Quakes offense seemed to come to life.

“I thought we came out in the second half and showed a lot of fight, said Wondolowski. “We were pressing for a goal. To be honest, if did get one maybe in the middle of the second half, we make it a game.”

Wondolowski’s chance to half the Dynamo lead came in the 67th minute. A well placed cross into the penalty area from Morrow found Cato at the far post. Electing to pass instead of taking a shot on target, the Trinidadian blasted the ball through the six-yard box intending to find Wondolowski. The Quakes MVP stepped in front of his defender, but he inexplicably missed the ball and it went over the endline for a Houston goal kick.

On the restart, the Earthquakes welcomed the season debut of Alan Gordon for Salinas. The target forward was slow to get involved in the match, but he did show a good presence with the ball at his feet. Gordon is the first of the many injured first-choice starters — a group that includes Steven Lenhart, Steven Beitashour, and Marvin Chavez — to return to action for the Earthquakes in 2013.

“I feel very confident in my team no matter who is out there,” said Wondolowski. “It’s always disappointing when you don’t get the result you want, but it is nice to look on the horizon and see a lot of healthy bodies coming back.

With numbers pushing forward, the Earthquakes nearly pulled a goal back in stoppage time when Sam Cronin collected a throw-in deep on the right sideline and fired the ball across the Dynamo goal. Wondolowski was waiting at the far post, but his snap header bounced tantalizingly off the goal frame and away to safety. Hall and the Houston defense saw out the remainder of the match to record their second clean sheet of 2013.

“In the second half, our competition level was much better,” said Busch. “We worked, we tried to get back into it and that’s all you can ask. We did some very good things tonight. We get back home next weekend and we’ll get it right.”

The Earthquakes return to San Jose to face the Vancouver Whitecaps at Buck Shaw Stadium on Saturday, April 6.