A change of shoes leads to Buck Shaw blues: Quakes settle for draw with Whitecaps

Share All sharing options for: A change of shoes leads to Buck Shaw blues: Quakes settle for draw with Whitecaps 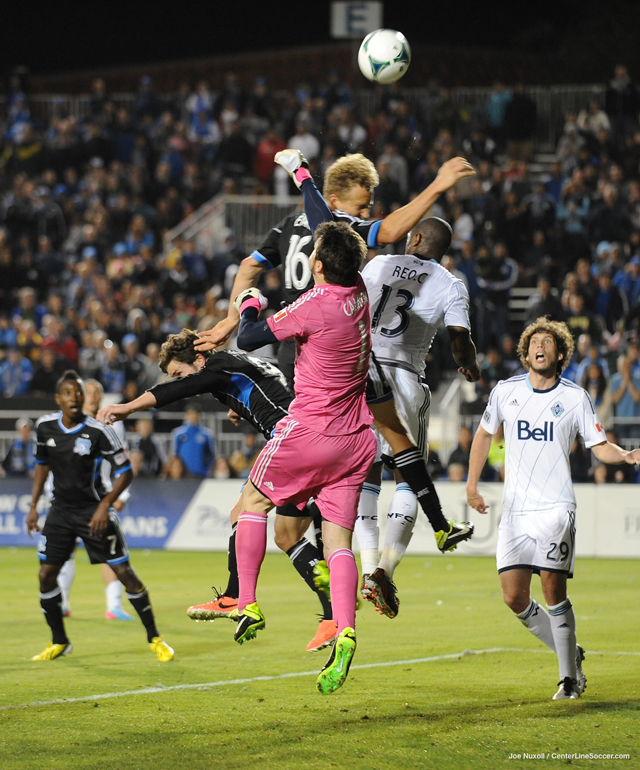 SANTA CLARA, Calif. — An end-to-end affair at sold out Buck Shaw Stadium saw the San Jose Earthquakes play the Vancouver Whitecaps to a 1-1 draw, but the home side was left wanting much more from the effort.

Chris Wondolowski provided the lead for the Quakes early in the first half, but the ‘Caps equalized through Corey Hertzog to force a share of the points.

“On general play, I thought we should have won the game,” said head coach Frank Yallop. “But a tie is a tie, and we got a point toward our goal of making the playoffs.”

The Vancouver goal came about when they were gifted the opportunity to play with a two man advantage as Earthquakes teammates Victor Bernardez and Alan Gordon were stranded on the sideline after electing to exit the field to change their footwear. Ready to come back on well before the Whitecaps goal, 9-man San Jose yielded defensively to wipe away their well taken lead.

“I’m not blaming the players,” said Yallop, “but it was a weird situation that two of our guys were off the field changing their boots and don’t get to come in and they score a goal.”

Referee Fotis Bazakos was made aware that the two players were ready to return to the field, but he chose to let Vancouver continue their possession. When questioned through a pool reporter after the match, Bazakos provided the text from the FIFA guidelines that players may not reenter the field until a stoppage in play. Unfortunately for the Earthquakes, it was Hertzog’s goal that provided that stoppage.

“Every year in MLS you see something that you’ve never seen before in your life,” shared visiting goalkeeper Joe Cannon. “I think that might be the moment for this year.”

The Earthquakes threw everything they had at the Whitecaps at the end, as they welcomed back Steven Lenhart to the attack, but a late match winner was not in the cards for the home side.

“I thought we deserved one,” said Yallop. “We pushed and probed and did all the things we normally do and tonight they did not go in.”

Against a team he had scored against 6 times in his career, including 4 goals in the last two match-ups at Buck Shaw Stadium, Wondolowski started the game looking very dangerous paired with striking partner Gordon. In the 5th minute, a chipped ball from 25 yards over the Whitecaps defense was met by Wondolowski in front of goal, but the loose ball was pounced on by Cannon.

The former Earthquake favorite was forced into another save in the 14th minute when Wondolowski ripped a shot from 10 yards after receiving a through ball into the area from Shea Salinas after some nifty work from Gordon. The Earthquakes were on the ascendancy, and it looked certain that they would break through the under siege Whitecaps defense.

Third time was a charm for Wondolowski, as he finally put one past Cannon in the 18th minute. After forcing a turnover by Whitecaps defender Alain Rochat, Salinas collected the loose ball and grounded the ball to Gordon at the top of the area. The target man with the surgically repaired foot turned the ball into the path of Wondolowski cutting into the box. Taking a touch with his left foot and transferring to his right, Wondo blasted a shot into the upper right corner of the goal to stake the Earthquakes to a 1-0 lead.

The Quakes eased up on pressuring the ‘Caps following Wondolowski’s goal, and the defense played ably to limit the visitors’ chances in the attacking third. Though the possession arrow began to swing in favor of Vancouver, they were unable to register a single shot on target throughout the first half.

San Jose appeared to have the match safely under control until an unfortunate sequence of events just after the hour mark allowed Vancouver to equalize. Needing to make a change to their footwear, both Bernardez and Gordon elected to head to the sideline at the same time, leaving the team two men down and the Whitecaps in possession. As play continued, Bazakos refused to wave the two teammates back onto the field, and in the 62th minute a shot from Daigo Kobayashi was deflected to the feet of Hertzog. The forward turned with the ball and slotted a shot past goalkeeper Jon Busch to draw the Whitecaps even. The goal marked the first shot on target by Vancouver to that moment of the match.

Stung by the Whitecaps goal, head coach Frank Yallop sent attacking players Cordell Cato and Lenhart into the match in search of a match winner. The introduction of Lenhart marked the first time since late in the 2012 season that all three of the Earthquakes top goal scorers from last year were on the field at the same.

Lenhart’s first touch of 2013 nearly resulted in a goal as a hard fought ball on the right wing by Cato was collected by Sam Cronin and sent into the area. Lenhart got a good head on the ball, but the shot went teasingly wide of Cannon’s net.

A very physical final quarter hour of the match saw both sides take advantage of Bazakos’ conservative whistle, and tempers flared up and down the field. A nasty looking tackle by Vancouver’s Nigel Reo Coker on Cronin saw the Quakes midfielder flipped in the air, but the referee waved the players to play on.

Even through four minutes of stoppage time, with San Jose pouring pressure upon the ‘Caps defenders, the game would not allow for a winner. The Earthquakes last ditch effort to secure three points went wanting when an open Cronin struck a ball past Cannon, but the shot rattled off the far post. Wondolowski collected the rebound, but his shot was blocked out by a Whitecaps defender.

Successive corner kicks in the dying moments gave the Quakes ample opportunity to score, and another shot was cleared off the goal line by an apparent handball from substitute Tommy Heinemann, but the Whitecaps stayed resolute and the match ended knotted at 1-1.

With the result, the Earthquakes pushed their overall record to 2-2-2. San Jose returns to action next Sunday when they visit the Portland Timbers.