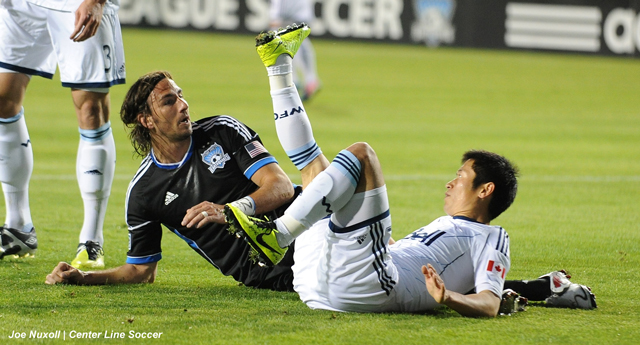 Last week, the Earthquakes elected to play with a two man disadvantage and were punished by a Vancouver Whitecaps equalizing goal. This week, courtesy of a red card via two yellows earned by Alan Gordon, San Jose capitulated late to the Portland Timbers in a 1-0 loss at Jeld-Wen Field.

“Even with 10 men, I felt it was going to be 0-0 in the end,” said head coach Frank Yallop. “We didn't play particularly well. It didn't feel that we were probably going to score.”

Will Johnson earned the victory for the Timbers with a free-kick goal in the 78th minute. For Johnson, it was his third goal of the 2013 season, and it gave Portland their second straight victory of the year.

“We did defend the box well,” added Yallop. “I think that for us, when your back is against the wall, with 10 men, you have to keep digging in there.”

The most significant digging of the night came via Gordon’s behavior in the match, as the forward’s two yellow card infractions earned him an ejection and put the Quakes in a hole. Gordon’s night also included the use of a derogatory slur directed at Johnson, which prompted an immediate apology after the game.

“I sincerely apologize for what I said in our game tonight,” said Gordon via a club statement. “Although I said it in the heat of the moment, that language has no place in our game. That is not my character, but there is still no excuse for saying what I said. I made a mistake and I accept full responsibility for my actions.”

In addition to the one game suspension Gordon automatically will receive for his red card infraction, his use of a homophobic slur against Johnson is likely to earn Gordon at least another 3 games. A similar incident during last year’s MLS playoffs by Marc Burch earned the Seattle Sounders defender a 3 match ban.

Johnson exacted a measure of revenge by striking a perfect curling free kick goal that proved to be the match winner for the Timbers. The loss dropped San Jose’s all-time record to Portland to 0-2-4 and their overall season record to 2-3-2. The Quakes will look to rebound next weekend when they face the Timbers for a second successive match.

Getting shut out did not seem in the cards when the Earthquakes starting eleven was announced prior to the match. For the first time since a 4-1 victory at Colorado last October, head coach Frank Yallop was able to start Gordon, Steven Lenhart, and Chris Wondolowski together. The attack-minded line-up paid dividends that fall evening as Wondolowski recorded a hat-trick against the Rapids.

Unlike Colorado in that match, one in which the Quakes jumped out to a 2 goal lead inside of 11 minutes, the Timbers proved to be a much more worthy opponent. Looking out of sync as they played their 6th different starting line-up in their first 7 games to start the 2013 season, San Jose had difficulty connecting passes in the offensive half of the field. And when the team did get shots on goal, as they did through Ramiro Corrales in the 16th minute and Rafael Baca in the 25th minute, the efforts did little to challenge Portland goalkeeper Donovan Ricketts.

The only significant action of the first half was a yellow card earned by Gordon in the 41st minute and by Timbers midfielder Diego Chara in the 44th minute. The chippy encounter stretched an additional 5 minute of stoppage time before the break, but neither side was able to muster much up in the attacking third.

The Timbers were without centerbacks David Horst and Andrew Jean-Baptiste, but target forwards Lenhart and Gordon did not dominate as might have been expected. Instead, Portland defensive duo Mikael Silvestre and Mamadou “Futty” Danso were able to stymie the Earthquakes offense through the first hour of the match, helping the home side to a nearly 2:1 advantage in possession in that time. Lenhart made way for substitute Cordell Cato in the 63rd minute without registering a single shot attempt.

The match changed completely when Gordon was shown a second yellow for an errant elbow on Silvestre while challenging for an aerial ball. Referee Hilario Grajeda produced a red card to Gordon in the 69th minute, and the Earthquakes settled in for more than 20 minutes playing a man down.

In the 78th minute, the Timbers earned a free kick when Corrales bundled over Kalif Alhassan at the top of the penalty area. With the ball set 25 yards dead center in front of goal, Johnson curled a beautiful shot over the defensive wall that eluded goalkeeper Jon Busch and settled into the back of the net for the game’s only goal.

The Earthquakes, despite playing a man down, put up a valiant effort in attempt to find an equalizer, but the closest they came was deep in stoppage time. A long throw-in from Justin Morrow was flicked in the area by substitute Nana Attakora, but Wondolowski was unable to get much power behind his headed follow-up and Ricketts safely collected the shot on target.

Portland saw out the remaining moments of the match to secure their second straight victory under first-year coach Caleb Porter. San Jose remained winless on the road in 2013 and return to San Jose to face the Timbers again next Sunday at Buck Shaw Stadium.