Share All sharing options for: Alan Gordon's "unacceptable and offensive language toward an opponent" earns three game suspension from MLS 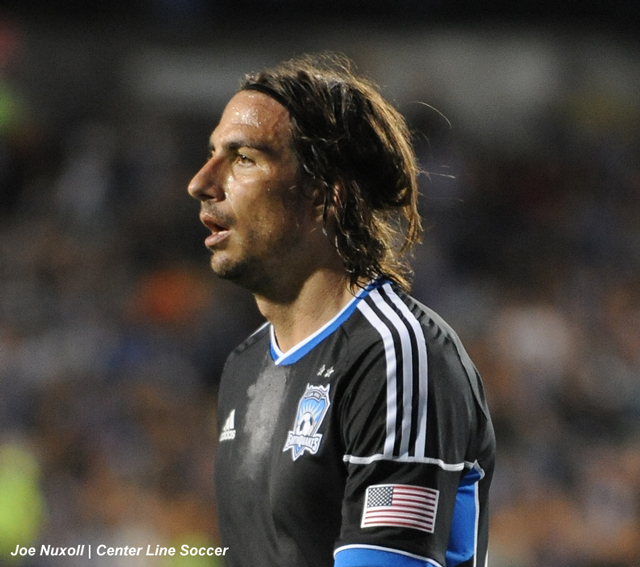 Sunday was not a great night for San Jose Earthquakes forward Alan Gordon. In earning two yellow cards against the Portland Timbers, Gordon was ejected from the match and consigned his team to a 1-0 loss. In between the two cautions, Gordon was caught on camera using a gay slur directed at Timbers midfielder Will Johnson. That Johnson eventually scored the match winner for Portland provided some karmic justice for Gordon's transgression, but it was of minor significance when compared to the insensitivity his comment held for those that wish to believe MLS when its players pledge to stamp out discrimination from professional soccer.

After two very high profile derogatory comments from MLS players were punished by league officials in 2012, many hoped that the lengthy 3 match bans imposed on the guilty would serve to prevent other players from displaying the same abhorrent behavior. Instead, as Gordon's actions have shown, not everyone in MLS has received the message.

Through its MLS W.O.R.K.S. community service branch, MLS has instituted a "Don't Cross the Line" program of public service announcements that are played in stadiums and on television during league matches. Gordon's teammate Chris Wondolowski participated in the program, as did other high profile MLS stars. The message is clear: Discriminatory language and behavior will not be tolerated on or off the field in Major League Soccer.

Immediately following the Earthquakes 1-0 loss to the Timbers on Sunday, Gordon was unavailable to the media. However, within a few hours of the final whistle, he issued an apology for his comments through a club statement. Contrite but direct, Gordon took responsibility for saying the gay slur and pleaded that it was totally out of character.

By midday Monday, Earthquakes president Dave Kaval released his own statement on the incident calling Gordon's inappropriate language an isolated incident that do not reflect the ideals of the Quakes organization. And on Tuesday, the MLS Disciplinary Committee and league commissioner announced that Gordon had been suspended for three matches for "unacceptable and offensive language toward an opponent."

Should the penalty levied against Gordon been greater? Verbally sparring on the soccer field is nothing new, but using language that is hurtful to so many does demand condemnation. That MLS even suspends players in such instances should be celebrated, and other sports organizations could learn a lesson from its swift action against Gordon and others. Such steps toward completely eradicating homophobia from sporting culture may not always seem effective, but as CSNBayArea.com's Ray Ratto explains, the process will take place incrementally and not overnight.

After a journeyman's start to his MLS career, Gordon reached the pinnacle of popularity and performance last year in turning in his best season as a professional. He had become the visual and spiritual leader of an Earthquakes team that captured the Supporters' Shield as the best team in the league. He earned his first cap with the U.S. Men's National Team. But with the sudden utterance of two inflammatory words, spoken in the heat of the moment by the otherwise affable Quakes forward, Gordon has shaken the support he has so carefully earned in the opinions of many fans.

Redemption in the hearts and minds of his fans won't necessarily come easy, but with his trademark frank openness, Gordon has already started down the path to earning their forgiveness. Gordon knows what he said was wrong, that was evident for all to see from the very moment the words left his mouth. Genuine apology submitted, deserved penalty given, necessary lessons learned.