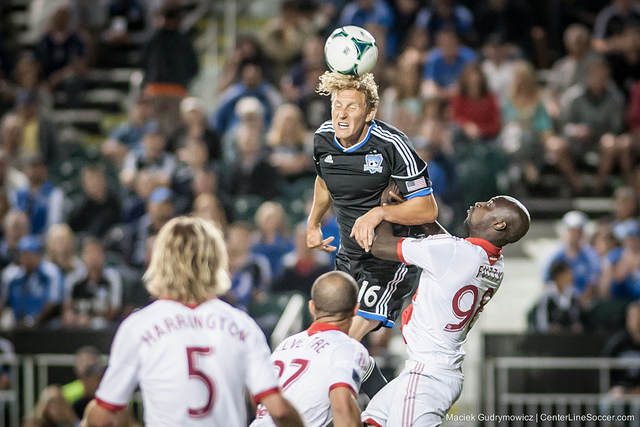 SANTA CLARA, Calif — The long-awaited sequel to the 2012 Supporters’ Shield winning hit of 2012 made its premiere on Sunday and a sold-out Buck Shaw Stadium audience roared their approval at the final curtain. “Return of the Goonies” has received rave reviews on its debut as rookie forward Adam Jahn scored in the second minute of stoppage time to earn the San Jose Earthquakes a 1-1 draw against the Portland Timbers.

The visitors scored first in the match through Diego Valeri and looked set to make it two straight wins against San Jose, but an all-out attack by the Earthquakes over the last minutes of the match allowed them to find an equalizing goal.

“I don’t want to have to keep doing that,” said head coach Frank Yallop regarding the team’s propensity to leave it late in games to score goals. “I felt we should have been up in the game before they scored, but we came back from adversity. In the end we dug deep and got a point and that was important.”

The trademark “never say die” mentality that defines the team was on full display for the sold-out Buck Shaw crowd, as no less than four Quakes touched the ball to keep the play alive that led to Jahn’s goal.

“That goal was a team goal,” said Jahn, he notched the second goal of his rookie campaign. “There were three flicks and we were sending it into the danger zone and when you do that, good things will happen.”

Steven Lenhart was part of that mix, and himself someone that knows a thing or two about scoring late into stoppage time. An original Goonie, Lenhart was pleased with what he saw from Jahn coming off the bench. For the bruising forward, who played the entire game for the first time this season, Lenhart saw Jahn as just the lift the team needed down a goal.

It was an effective strike, but more a product of the team’s tireless effort to create chances late in games. Lenhart agreed that though the sequence leading up to the game-tying goal won’t win any style points, those aren’t the points the team in chasing as they push to advance up a crowded Western Conference table.

“It’s ugly,” said Lenhart, “but it was effective in that moment so obviously we were stoked.”

“For us to not have scored a goal in this game would have been not good with the quality chances that we had,” said coach Yallop. “It wasn’t a ton, but we had four good chances to score and at least we got one.”

The late match heroics ensured that the Earthquakes franchise record streak of MLS regular games without consecutive losses stayed intact. San Jose last lost two matches in a row in August of 2011, a stretch of 52 games spanning over three seasons.

Next up for the Earthquakes is a trip to Los Angeles to face resurgent Chivas USA. The match is set for a Saturday night kick-off at 7:30 p.m. at the Home Depot Center.

San Jose welcomed back defender Steven Beitashour to the starting line-up for the first time this season. The 2012 MLS All-Star has been sorely missed by the team as in his absence his replacements have failed to register a single assist in the season’s first 7 games. Last year, Beitashour was instrumental in aiding the offense with his 6 helpers from the run of play.

“I’m feeling great,” said Beitashour. “It was definitely exciting to be back. I was nervous at first, but after the first ten or so minutes everything felt great. Once we get all our guys back, it is going to be good. Some more fireworks are coming up.”

The Earthquakes nearly struck first, as a strong hustle play from Lenhart in the 22nd minute won the ball for teammate Shea Salinas. The midfielder made a quick turn and slid a pass to Chris Wondolowski racing into the area from the weak side. Wondo fired a shot toward the center of the target, but goalkeeper Donovan Ricketts reached up a glove to swat away a sure goal.

Physical play from both sides, an extension of the chippiness that defined last Sunday’s match in Portland, led to a pair of yellow card cautions in the game’s opening stanza. Lenhart was adjudged to have tackled Mamadou “Futty” Danso late in the 37th minute and earned a caution from referee Armando Villareal. Futty returned the favor in first half stoppage time after clearing out Lenhart with a tough tackle near midfield to go into the referee’s book.

“That’s the way Lenhart plays,” said coach Yallop. “His heart’s on his sleeve and he works hard and tries to the best for the team. That means challenging players and not giving a center back a minute’s rest. That’s a good thing. I just don’t want him getting into trouble in every game; he’s only trying to show enthusiasm.”

Despite doing very little in the attacking third to that point in the match, Portland took a 1-0 lead in the 59th minute through Valeri. Following a strong tackle by Beitashour to knock a dangerous ball loose from striker Ryan Johnson in the area, the ball fortuitously found the Timbers designated player at the top of the box. Without needing to settle the ball, Valeri scorched a one-touch ball past a hapless Jon Busch.

“So unlucky, but that’s the way it goes sometimes,” said Beitashour about the deflected ball from his tackle. “I thought it popped up pretty high and got away from the danger zone, but it went straight back down to one of their guys and he finished it, so it was unfortunate.”

A minute after the Portland goal, the Earthquakes welcomed the season debut of Marvin Chavez as a substitute for Salinas. Down a goal, San Jose began to press forward in greater numbers, adding substitute Sam Garza in the 69th minute for Ramiro Corrales to get more speed players on the field.

“I didn’t play to my expectations and contribute as much as I wanted to coming into the game,” said Chavez through an interpreter. “The good thing was I got the minutes under my belt. I didn’t feel any pain in my knee and I think in the next game you will see a different, better player.”

“He gives us the savvy, the spark if you like and he is enthusiastic,” said coach Yallop. “I like how he has an appetite for the game and he did well given that he hasn’t played for five months.”

Lenhart had a great look at goal in the 72nd minute after receiving a pin-perfect cross from Sam Cronin, but his snap header from 10 yards went agonizingly wide of the target. Two minutes later, Garza had a chance to make an immediate impact, but as he broke in one-on-one with Ricketts, his late shot attempt was easily smothered by the goalkeeper.

“If you look at it, he should have scored,” said coach Yallop. “He intercepts the pass and he is in. If he had scored that one, we would have had a pretty good chance of maybe going on to win the game, but he took too many touches. It’s near easy coming off the bench.”

Third time was a charm for San Jose, as the team’s last substitution of the night, forward Jahn, proved the hero. In the second minute of stoppage, the Stanford rookie connected on a loose ball in the Portland area and sent a sold-out Buck Shaw crowd into a frenzy with an equalizing goal. The strike was Jahn’s second on the season, his first an equalizer against New York back on March 10.

“It feels great to get the goal, but if he put anyone on the bench in they would have done the same thing,” said Jahn. “It’s working hard and scrapping for goals. We know that in the last few minutes we have a great chance of scoring.”

“He’s a great player,” said Lenhart about the rookie forward and newly minted Goonie. “He gets in good spots and is composed and finishes well. It’s good to push at the end of games and try to get a goal. We want to be in their face and let them know we are not going to back down.”

“I just felt that we needed it,” said coach Yallop about sending in Jahn as his last substitution of the match. “Adam has good quality and is calm. He’s done well for a young kid and proved tonight that he’s a good player. He made me look good tonight.”

“When you go in as a sub,” said Jahn, “you know that everyone on the field is still pushing and you have to bring energy and raise the level and give it your all.”

Jahn certainly gave it his all, and the Earthquakes reaped the benefits of earning another late point.