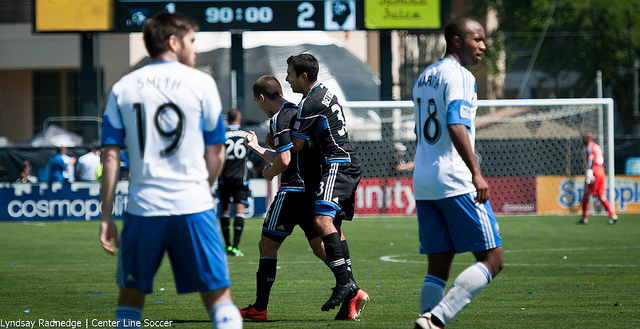 The Earthquakes did it again, securing a point when it seemed a loss was inevitable, as a stoppage time goal from Sam Cronin was enough to lift San Jose to a 2-2 draw against the Montreal Impact.

After falling behind in the match via two goals from Impact midfielder Justin Mapp, the Quakes stormed back late to pull one back through Adam Jahn, setting up Cronin’s heroics. The midfielder picked the perfect time to net his first goal of the MLS season.

“Their defenders were playing off the ball, trying to protect the net,” said Cronin. “There was hardly any pressure on me. After my touch, I had a second to compose myself and I went far post for the score.”

The Earthquakes dominated throughout the match, and had numerous opportunities to take a lead in the first half, but Impact goalkeeper Troy Perkins saved the visitors time and time again.

“Troy played a wonderful game and had a couple of great saves,” said Chris Wondolowski, “but it is our character not to give up and try to fight until the end. It was bittersweet to get a point, but we can’t keep putting ourselves into a hole.”

Trailing by two goals just minutes into the second half, the Earthquakes again had to fight to secure a draw at home. San Jose has now gone six games without a win, and the dramatic late game heroics are not enough of a reward for a team that is playing some of their best soccer of the season.

“We’re battling and doing a lot of good things, but we need to start picking up points,” said goalkeeper Jon Busch. “We did enough to win today, and we need to start turning these ones into threes.”

San Jose started the game brilliantly, so it was unfortunate they found themselves facing a two goal deficit. But with the game nearing an end, it was the Quakes relentless pressure that allowed them to earn a point on the afternoon.

“Overall, I thought we had a good performance,” said head coach Frank Yallop. “We just can’t seem to punish teams early in the game when we have chances. But as you saw, we did not give up and we got something out of the game.”

Photo Gallery: Check out the complete album from the Quakes 2-2 draw against the Impact

San Jose made one change to a starting line-up that drew at Chivas USA last weekend, as a two match suspension to Steven Lenhart opened the door for Jahn to earn his fourth start of the season.

The addition of Jahn for Lenhart did little to change the strategy of the Quakes, as the recipe of crosses into the penalty area continued unabated. In the 14th minute, with a long pass from Justin Morrow causing confusion for the Impact defense, Jahn swung a volleyed shot that caromed off the crossbar. Wondolowski was there to head in the rebound, but Perkins made a spectacular save to parry the attempt from danger.

Montreal, despite behind under siege from the opening whistle, took a 1-0 lead on a counterattack in the 24th minute. After a giveaway from Morrow in the Impact half, Mapp collected the ball and, after eluding a Shea Salinas tackle, unleashed a knuckling 40 yard shot that deflected in off the post for the game’s opening goal.

The Earthquakes, somewhat taken aback by the goal, were able to quickly regroup and nearly found the equalizer in the 28th minute. A floating cross into the area from Steven Beitashour was chested down by Wondolowski into the path of Rafael Baca at the top of the six-yard box. His shot attempt was expertly palmed over the crossbar by Perkins to keep the score in favor of the visitors.

Referee Drew Fischer was kept busy throughout the first half as he reached to his pocket four times in awarding yellow cards to Morrow and Cronin for the Earthquakes and Jeb Brovsky and Collen Warner for the Impact.

Just over a minute into the second half, Montreal doubled their lead as Mapp again found the back of the net. After Victor Bernardez stopped a low cross from Andres Romero into the area, Andrew Wenger pounced on the loose ball and sent a hard cross through the six-yard box. With Morrow trailing the play, Mapp was able to tap the ball in at the far post to give the Impact a 2-0 lead.

San Jose pulled one back in the 59th minute through Jahn, his third goal to start off his rookie season. A pass to the top of the area was collected by Wondolowski and touched to Cronin entering the area. He was able to slip the ball to Jahn, and the forward slotted a left-footer inside the far post to narrow the Impact lead to 2-1.

Head coach Frank Yallop sent in reinforcements into the match with Cordell Cato and Walter Martinez entering for Salinas and Baca. The two nearly helped the Quakes back into the game in the 67th minute as they combined to get the ball on the far right wing with space to run. Cato drilled a cross into the area, but Jahn could only poke the ball over the target.

Somewhat vulnerable in the back after throwing in so many numbers forward, the Earthquakes were saved by goalkeeper Jon Busch in the 71st minute. After beating Bernardez to a ball near the center line, Wenger drove in on the ‘keeper with visions of putting the game away. Instead, his weak shot was smothered by Busch and the home side stayed hopeful.

The Earthquakes made their final substitution in the 76th minute as Yallop gave Marcus Tracy his MLS debut. Tracy came close to making an immediate impact on the game as he narrowly missed equalizing on a loose ball in the area.

Montreal remained resolute as the clock ticked down and the game entered five minutes of stoppage, but the Earthquakes came to life just in time to find another Goonies style goal. A long ball from Martinez in the 91st minute was headed back to Cronin at the top of the area and he slammed a shot inside the far post to bring the score level.

Resurgent, the San Jose offense pressed for a winner but had to settle for another home draw. The Earthquakes next host Toronto FC at Buck Shaw Stadium on Wednesday evening.