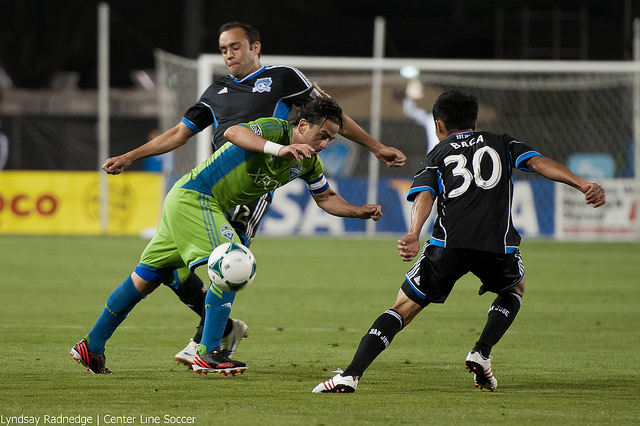 The San Jose Earthquakes were no match for a resurgent Seattle Sounders squad on a warm afternoon at CenturyLink Field as the rave green side dominated the visitors by a 4-0 margin.

A brace from forward Lamar Neagle sandwiched a superb free kick goal from Mauro Rosales and a stoppage time strike tacked on by designated player Obafemi Martins provided all the fireworks in the match, as Seattle earned their first home victory of the MLS season and stretched their unbeaten streak to 5 games.

“I felt that we had chances to score, but you’ve got to hand it to Seattle,” said head coach Frank Yalop. “They scored some good goals today and three goals were very good. They had a good start to the match. We are a team that prides itself on never giving up, and we didn’t, but four-nil never sits well with anybody.”

Without midfield catalyst Marvin Chavez, serving the first of a two game suspension, San Jose was unable to find much rhythm in the attacking third and was unable to create much in the way of scoring opportunities. Even when the team did create chances, they were not sharp enough in front of goal to challenge Seattle goalkeeper Michael Gspurning, who earned his fourth clean sheet in his last 5 starts.

“It’s a game of chances,” said midfielder Sam Cronin. “After we conceded the first goal we had a couple chances. If we score that, tie it 1-1, it’s a completely different game. We didn’t, and that’s the way the game goes sometimes.”

While instability in the starting line-up has been a constant this season, the Earthquakes seem to have enough depth on the roster to overcome it. In nearly every game this year San Jose has shown glimpses of the form that propelled them to the Supporters’ Shield in 2012, but putting together a complete 90 minute performance has been agonizingly absent.

“It’s football,” explained Yallop. “I told the guys in that it’s about both boxes. It’s about defending our box properly and being dangerous and getting to the ball first in the opposing box and I think Seattle did that better than us today.”

The Earthquakes, after playing 3 games in 8 days, get a week off before returning to MLS action on Saturday against the Colorado Rapids at Buck Shaw Stadium.

As has been the case for most of the 2013 season, injuries and suspensions wrecked havoc on the Earthquakes first choice starting line-up. Defender Nana Attakora suffered a head injury in an aerial collision with Toronto FC’s Donell Henry early in San Jose’s 2-1 win Wednesday night and was held out with concussion symptoms. Chavez was suspended by the MLS Disciplinary Committee for two games for an incident in Wednesday’s game and was replaced by veteran Ramiro Corrales.

The Earthquakes did see the return of forward Alan Gordon from suspension, and the team’s second leading scorer of 2012 replaced rookie Adam Jahn as Chris Wondolowski’s striking partner against the Sounders. Jahn was slowed from a deep thigh bruise suffered during a defensive effort late in the 2-1 victory over TFC and moved to the bench for Saturday’s game.

Without Chavez and Shea Salinas in the line-up, the Earthquakes suffered from a lack of speed on the wings, and from the opening whistle Seattle controlled the tempo of the match. For the first 15 minutes, the Sounders enjoyed a nearly 2-to-1 advantage in possession as the Quakes midfield found it difficult to win the ball.

Seattle had a golden chance to take the lead in the 24th minute as midfielder Brad Evans collected a ball along the left flank and whipped a cross through the Quakes area. Rosales met the ball inside the six-yard box, but the Sounders captain headed wide of the target as he attempted to direct the ball back across the goal mouth.

Four minutes later, the Sounders gained a much deserved goal through Neagle. With space on the right side, Eddie Johnson sent a cross into the area that Rosales chested down into the path of Neagle. The Sounders forward, barely beating defender Steven Beitashour to the loose ball, scored his first goal of the season to give Seattle a 1-0 lead.

The Quakes had a great chance to equalize in the 37th minute from a free kick restart. Sam Cronin floated a ball into the area for Corrales to head back across goal to an unmarked Gordon six yards from goal. Normally automatic from such range, Gordon instead headed the ball inches over the crossbar.

In the 42nd minute, Wondolowski had a chance to get on the scoresheet, as he met a Rafael Baca cross in the middle of the area, but his weak shot was smothered by Gspurning. Gordon had another strong scoring opportunity two minutes later, but the forward’s shot was right into the grasp of the Seattle goalkeeeper.

The Earthquakes inability to take their chances came back to haunt them just ahead of halftime as Rosales scored to put Seattle up 2-0. After Baca had given up a dangerous free kick near the top left corner of the area and earned a yellow card for the foul, Rosales belted the dead ball in off the near post to double the Sounders lead. It was the first direct free kick goal for Seattle in almost two years, and it left the Quakes shaking their heads heading into the visitor’s locker room down a pair of goals.

“It’s over the wall, top corner,” described Yallop. “Jon nearly gets it, but the ball just had so much pace and it touched the post as well. … We started to kind of get into the game and then they scored right before halftime.”

“That was a great goal,” added Cronin. “The only way to prevent that goal is to not give away a foul there. We know they are good on service, so we need to defend a little better in our box.”

Within a minute of the start of the second half, the Sounders nearly made it a 3-0 lead. A free kick delivery from Rosales was met by Neagle near the penalty spot, but his snap header on target was expertly touched over the crossbar by goalkeeper Jon Busch.

Neagle did not miss his next chance, as his hard work against Justin Morrow created enough space at the top of the area to lash a shot off the inside of the near post for the Sounders third goal of the afternoon. The play originated near the center line when the Quakes midfield was unable to win a long goal kick from Gspurning.

Down 3-0, the Earthquakes looked for a spark on offense with the introduction of Salinas for Corrales in the 64th minute and Marcus Tracy for Alan Gordon in the 65th minute. With his 64 minutes played, the 36 year old Corrales, who made his MLS debut during the league’s inaugural season of 1996, surpassed 20,000 career minutes played in his time with San Jose.

San Jose did little to get back into the game, as Seattle seemed content to play defensively with a 3 goal lead. Only a kerfuffle between Wondolowski and Johnson in the 88th minute, in which both players earned yellow cards from referee Jair Marrufo, provided much action over the last quarter hour of the match.

Seattle sealed the victory in stoppage time as a defensive miscue from center backs Morrow and Bernardez allowed Martins to tap in a fourth goal for the home side. The 4-0 loss to the Sounders kept the Earthquakes at fifth place in the Western Conference with 14 points from 12 matches played, but Seattle stands only 2 points back with 3 games in hand.