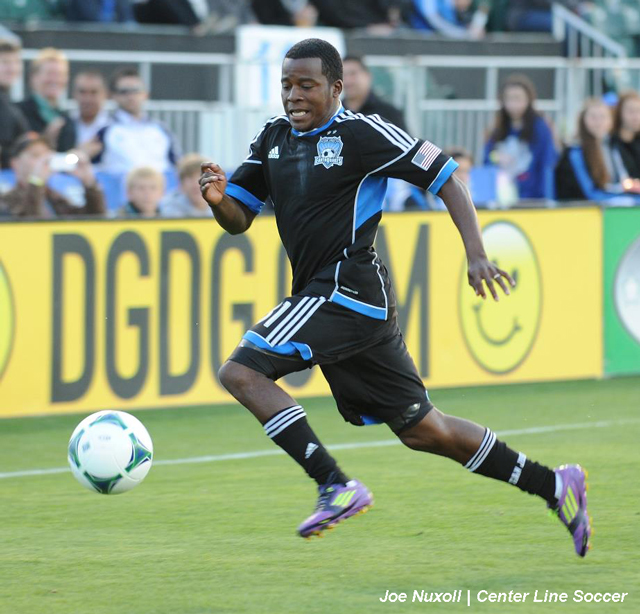 Other than their visit in late March to the Houston Dynamo, the San Jose Earthquakes arguably played their least inspired soccer of the season in last weekend’s match at the Seattle Sounders. Coming off the heels of a confidence boosting midweek win against Toronto FC, the Quakes instead sunk to a 4-0 defeat in Seattle and snapped their four match unbeaten streak.

Changes to the line-up precipitated a marked loss of cohesion on the artificial turf at CenturyLink Field — no more was that felt than on the wings where Marvin Chavez, the Earthquakes offensive catalyst, was unavailable for selection due to a two match suspension awarded him by the MLS Disciplinary Committee for violent conduct against defender Logan Emory in the Toronto victory.

And so, after a weekend in Seattle to forget, San Jose received some great news on Wednesday. After hearing an appeal by the MLS Players Union on behalf of Marvin Chavez challenging the two game suspension, MLS Commissioner Don Garber reduced the length of the suspension to one game.

The suspension reduction comes as a pleasant surprise to the Earthquakes, who earlier in the week were already preparing to play their upcoming Saturday match against the Colorado Rapids without Chavez. With Garber’s decision to modify the MLS DisCo ruling, an event that has occurred only twice in the last eight MLS seasons — the New England Revolution’s Clint Dempsey in 2006 and FC Dallas’ Jair Benitez in 2011 each had his two game suspension cut in half to one game — Chavez will be eligible for the Quakes game this weekend against the Rapids.

“Most teams in MLS will say there is one key guy that they would kind of miss (if not available),” said head coach Frank Yallop. “All our players are good, but we’ve missed Marvin. I’m not saying he is our greatest player in the world, but he is a very, very good player in our league that we’ve missed when he doesn’t play.”

The Honduran midfielder has one assist in four games for the Earthquakes so far in 2013 after missing the team’s first seven games due to a sprained medial-collateral ligament. In those four appearances this season, three as a starter, the Quakes are unbeaten (1-0-3, 1.50 PPG); the team has struggled to find any consistency in the eight games in which he was unavailable (2-4-2, 1.00 PPG).

“Marvin is very good wide, and we missed him,” said Yallop. If you don’t think one player doesn’t make a difference? I don’t know.” He then reiterated how disruptive it was to have Chavez suspended just as the team was starting to string together a series of positive results. “Disappointing because Marvin was playing great,” added Yallop.

Chavez was a significant component of the Earthquakes offense a year ago, as his career high 13 assists paced their franchise record tally of 72 goals. That spark has been missing in the 2013 Quakes, as through 12 games, the team has tallied only 12 goals and 16 assists.

“He’s obviously a great player,” said defender Steven Beitashour, who shares the right flank with Chavez in the Earthquakes 4-4-2 formation. “He brings a lot to the team. His individual skill and the way he goes at players pushes their whole team back, so it definitely helps when we have him.”

Chavez is not only invaluable to the Earthquakes because of his contributions on the field, but in league with fellow Honduran teammates Victor Bernardez and Walter Martinez, the diminutive winger provides a positive locker room presence with his boundless energy and positive outlook. A happy and relaxed Chavez is good for everyone on the team, providing camaraderie through comedy.

“Smiling and joking is still universally the same, no matter what country you’re from,” said Beitashour. “I think everyone would agree: Marvin is one of the funniest guys in the league, not just on our team. He’s hilarious.”

The return to eligibility of Chavez will be a big boost for the Earthquakes this Saturday, as the Rapids are one of the hottest teams in MLS over their last 7 matches (4-1-2) and sit just above San Jose in the crowded Western Conference standings. With over a third of their regular season already in the books, the Quakes can ill-afford to give away points in conference games, especially at home.

In addition to the Chavez suspension reduction announcement, the Quakes received further good news on Wednesday as the MLS DisCo announced that Rapids forward Edson Buddle was suspended one game for a reckless challenge that endangered the safety of his opponent, Columbus Crew midfielder Tony Tchani, in the 58th minute of their May 11 game. Buddle will serve his suspension this Saturday when Colorado face San Jose.

Will the Earthquakes take advantage of Garber’s gift, and can the squad get back to the winning ways? With a happy and healthy Chavez leading the way, anything is possible.