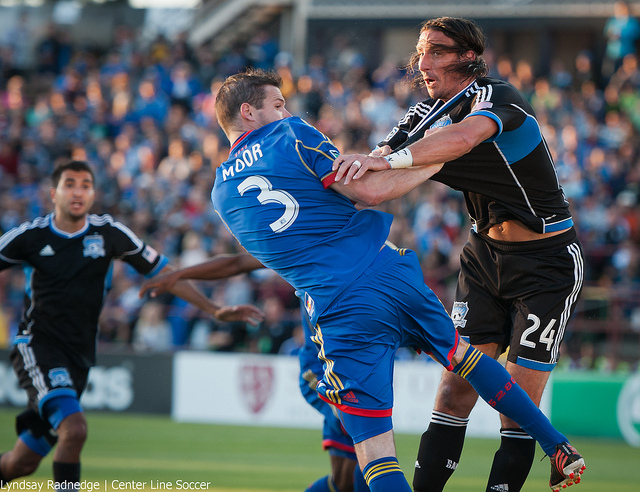 SANTA CLARA, Calif. — More late game heroics from the San Jose Earthquakes were on display Saturday night at a sold-out Buck Shaw Stadium as a Marvin Chavez free kick goal earned the home side a 1-1 draw against the Colorado Rapids.

“We need to win our home games,” said coach Frank Yallop, “but it’s about getting points. I like our effort right now, our drive, but we need to play with more confidence, more guile around the goal. … We are good when we have confidence, and we are not quite there.”

The visitors had taken a first half lead through defender Nathan Sturgis on a Rapids corner kick and did well to neutralize a Quakes side that was looking to bounce back from a 4-0 loss at Seattle the weekend before.

“It’s important for us to stay positive as a team and move forward,” said Alan Gordon, still working himself into match fitness following a four game suspension. “We are not going to get anything out of getting down on ourselves, and that is not what we are about. We fought well, we played well, we just need to get the results.”

Chavez, who might want to consider sending MLS Commissioner Don Garber a thank you fruit basket gift for reinstating the dynamic midfielder earlier in the week, scored in the last quarter hour of the match to level the match. For San Jose, it was their eighth goal after halftime at Buck Shaw Stadium and sixth of the season scored after the 75th minute.

“I learned from Victor Bernardez; he has a very strong shot,” said Chavez via a translator, referring to his fellow Honduran teammate who is well known for his devastating free kicks. “You can always learn something good from him and tonight I was able to put one into the back of the net.”

While the Earthquakes looked strong for much of the game, at one time playing four forwards on the field at the same time, the Rapids could easily have taken all three points on the night if not for the spectacular goalkeeping of Jon Busch. On multiple occasions in the second half, the San Jose ‘keeper came up solid against a talented Colorado attacking crew.

“Busch did well tonight,” said defender Jason Hernandez, back in the line-up after a lengthy absence due to injury. “He faced a lot of dangerous situations and he did well with them.”

For Busch, who missed out on a clean sheet after conceding a lone goal on a Rapids corner kick, the effort of the team was more important than any of his individual heroics.

“I did my job, my job is to make saves,” said Busch before adding that he expects better results ahead. “We made some good steps forward. … It’s one play right now, and it’s been that way for most of the season. We keep going, we keep battling, and we got another point.”

With 6 of their next 7 games on the road, the Earthquakes were looking to earn all three points against the Rapids, but instead had to settle for their sixth draw of the season, their fourth at home.

“We seem to be falling behind in most of the games we have had here,” said Yallop, looking back at the Quakes record in 8 home games thus far this season. “We can’t keep doing that, but one good thing is we are coming back into the games and getting points.”

One silver lining to San Jose earning a draw against Colorado: The result extends the Earthquakes streak of MLS regular season games without suffering consecutive losses to a franchise record 56 games. That mark will certainly be tested with their upcoming road trip.

For the first time this season, Yallop had available to start the match his entire complement of first choice players from 2012, with Walter Martinez filling the void in midfield left behind when Simon Dawkins returned to play in England.

Kicking off toward the setting sun, the Earthquakes had the first look on goal through Chris Wondolowski. In partnership with forward Gordon, Wondo created a shot on target that required a smart save from Rapids goalkeeper Clint Irwin.

Colorado’s game plan coming into Buck Shaw was to use an organized defense to neutralize the Quakes attack and to utilize their tall defenders on set pieces. The strategy worked to perfection in 26th minute when a Rapids corner kick delivery from Martin Rivero was volleyed by Sturgis past goalkeeper Busch for the game’s opening goal.

An apparent hamstring injury to midfielder Rafael Baca midway through the half required the introduction of substitute Adam Jahn in the 42nd minute. The rookie forward, with four goals already this season, nearly made it five with a headed attempt from close range in the 44th minute, but the ball bounced up and over the bar with the goal wide open.

In first half stoppage time, the Rapids nearly doubled their lead as Atiba Harris turned a ball in the area and rocketed an attempt that rattled the frame and caromed to safety. The Earthquakes entered the locker room at halftime fortunate to be trailing only 1-0.

The second half began with highlight reel saves from both ‘keepers. In the 49th minute, Martinez cracked a 30 yard shot that required Irwin to tip the knuckling ball over the bar. A minute later, Busch was tasked with a one-on-one situation with Deshorn Brown after a defensive turnover, but the Quakes goalkeeper expertly smothered the shot attempt inside the area.

Yallop made another forward-for-midfielder substitution in 56th minute sending in Steven Lenhart for Sam Cronin. It was Lenhart’s first appearance since the MLS Disciplinary Committee handed him a two game suspension earlier this month.

The Rapids surrendered a free kick in the 77th minute that earned defender Shane O’Neill a yellow card for a dangerous tackle. Martinez lined up the ball, but Chavez ran up and struck a perfectly placed shot into the far corner of the goal to equalize the score at 1-1. The goal was the seventh of the season for San Jose recorded after the 75th minute.

A corner kick in the 84th minute saw Sturgis with an opportunity to restore the lead for Colorado, but his snap header inside the area slammed off the crossbar. Busch was able to recover and make a catch save on the Rapids follow-up attempt.

Both teams traded chances in the 87th minute as first Jahn tested Irwin with a low shot inside the area and Brown carried a breakaway in on goal, but Busch did well to fling his body at the shot and deflect the ball on to the top of the net.

O’Neill was sent off with a straight red card for fouling Wondolowski near the top of the area and denying a goal scoring opportunity. Martinez struck the free kick into the wall as the game entered stoppage time, and the Earthquakes failed to collect the rebound.

Another free kick chance in the 94th minute saw San Jose load up the area with everyone on the field, but Chavez lifted his kick over the collective Quakes and out for a goal kick. The game ended a minute later with the scored tied at 1-1.

San Jose will leave the friendly confines of Buck Shaw to embark on a nearly month long four match road trip that starts next Saturday with a visit to Western Conference leaders FC Dallas. The Earthquakes next home game does not come until June 29 at Stanford University against the LA Galaxy.