Share All sharing options for: Mark Watson speaks out on new role as head coach of the San Jose Earthquakes 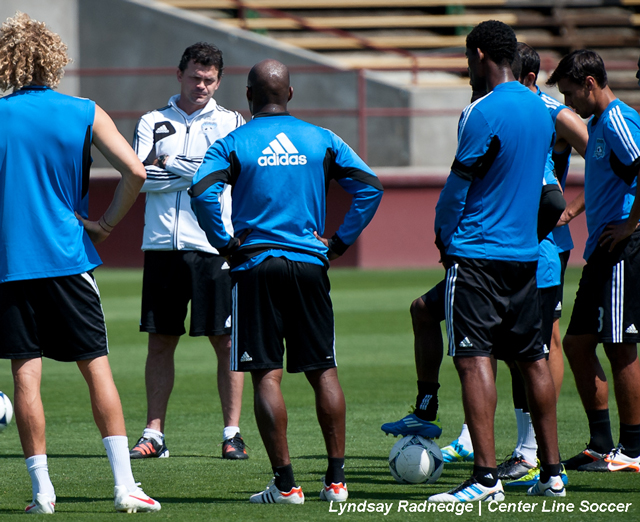 The news that Frank Yallop and the San Jose Earthquakes were parting ways came as a surprise to everyone associated with the club, including the man named as his replacement, Mark Watson. Formerly the chief assistant coach to Yallop, Watson barely had time to catch his breath on Friday after learning of his promotion and subsequently running his first training session with the team. In less than a week, for the first time in his career, he will lead the Earthquakes as their head coach in the team's next game at the Colorado Rapids.

Over the weekend, Watson spoke to Center Line Soccer about the parting of ways between Yallop and the Quakes, his promotion to head coach, the influences that will help shape his coaching philosophy, and what he expects from himself and the team for the remainder of the season.

Center Line Soccer: I imagine you were as surprised as anyone to hear the news on Friday that Yallop was stepping aside as head coach of the Earthquakes and that you were named interim coach through the end of the MLS season. When you began the week and with the rest of the coaching staff started your preparations for the team’s next game, could you have forecast such a sudden sequence of events transpiring?

Mark Watson: “No, it really was a surprise. It was just a meeting between Frank and the club, and at the end they decided to mutually part ways. It was very sudden and a surprise for everyone.”

CLS: The decision was sudden, so did Yallop have a chance to explain to you want transpired in that meeting?

Watson: “He didn’t really go into a lot of detail. We are very close and speak all the time, and I got the sense that after the meeting, whatever was discussed, he felt it was the right time to go. They agreed upon a separation and that was it.”

CLS: Dave Kaval, in an interview with Center Line Soccer on Friday, talked about how the decision to part ways with Yallop was not just about results, but also about how the club plans to move forward. He also talked about how he does not expect to make any other immediate changes. With that in mind, do you hope that you and the players will be able to turn this event into a rallying point?

Watson: “For me, the group of players we have is fantastic. They are a championship caliber team, and last year things went our way a lot of the time, but it was because they are an incredible group of guys. We are capable of very good things. I don’t think that this event in and of itself will necessarily rally the group, but more so it will the urgency of getting past the tough start to our season. We’ve been through a lot of adversity and the character of the team, which has been there all along, will come through and we will get ourselves out of this situation. We have a lot of belief in the group.”

CLS: One of the last acts Yallop made was to recommend you as his replacement. Kaval mentioned how he saw you as a head coach in MLS one day and that the “Frank Yallop coaching tree is a strong one.” Having been an assistant to Yallop for three-plus seasons in San Jose, is it important to the club that your ascension to head coach will provide a sense of continuity?

Watson: “If a new head coach had come in, it would have presented a lack of familiarity and a learning curve to getting to know the players and finding the best group to play in the games and move forward. Obviously, I have spent a lot of time with the group and I know there is so much character and quality in the group. Step one for us in turning the team around and getting results starts with having guys back from injuries and suspensions. Then with some small tweaks, I think we can turn the whole thing around. There’s a ton of quality in the group, and it is my job to get it out of them.”

CLS: The summer transfer window opens up in July, presenting an opportunity to almost immediately make an impact on the roster. Have you identified the types of players you want to see signed by San Jose to help reverse the team’s current form?

Watson: “We are always looking to add quality players. When the window is open, if the right player comes along and is the right fit for the club, we will definitely add to the strong squad that we have.”

CLS: In addition to possible summer signings, what do you plan to do with the current roster? Perhaps it has not exactly occurred as you expected it, but you are now the head coach of the Earthquakes. How do you envision putting your stamp on the current team?

Watson: “First off, I have inherited a fantastic group of players that have shown they can be very competitive in this league. I don’t think we need to make wholesale changes. What I do want to bring to the team is more work on our defensive organization. We have struggled since the start of this year with giving up early goals and I will address that. It makes it very difficult when you put yourself in a hole to climb out of it, so we will definitely be working to improve on that.

“Secondly, we have developed a reputation as a very direct team and I don’t think that is justified. Last year we moved the ball really well and moved forward at the right times and were very dangerous going forward. We’ve gotten away from that this year, so I’d like to see us move the ball around better. We have some fantastic players, players that are great on the ball, and we got away from having that great balance between possessing the ball and pushing forward and that is something I definitely will address in the coming weeks.”

CLS: Yallop has in many ways built a team that is not designed to grind out results but rather to take its chances and outscore its opponent. Basically, an almost exclusive focus on offense over defense that last year worked out as planned. With nearly half of this season already in the books and the team struggling near the bottom of the standings, can that same strategy be enough to get the desired results?

Watson: “There has to be balance; you need to have both parts. We have a lot of great attacking weapons and we’d be foolish not to utilize them, but on the other hand, we can’t concede a lot of goals, especially early goals, because it puts too much pressure on the team to recover. For me, it is about balance, and to be a championship team you need to have both. We will be working to find that balance in the coming weeks.”

CLS: Most Earthquakes supporters would be hard pressed to say much about you since your role as an assistant coach does not lend itself to making too many headlines. However, you are very involved, along with fellow assistant coach Ian Russell, in coaching the Reserve League squad and intrasquad scrimmages. How much has working with Yallop shaped the way you approach your role as a coach?

Watson: “I learned so much from Frank. He’s one of the top coaches I’ve been around and has a proven track record of success. In San Jose, it has been a great three and half years together and even when we worked together before that I learned a lot. You are a product of all your experiences, so I’ll definitely take the stuff from Frank, because he is one of the best in the game, as well as the little things from my experiences with other coaches, and put it all together.”

CLS: Looking back in your career, has any other person shaped your coaching philosophy as much as Yallop?

Watson: “When it comes time to have a philosophy and way of coaching, it comes together from your experiences. Whether you realize it or not, it comes from when you are a youth player up through when you are a professional. No one guy sticks out, other than Frank, through the years as that sole influence as you are constantly adding to your identity.

CLS: Do you expect that with all the time you have spent working as an assistant coach under Yallop will make it that much easier for you to take lead of the Earthquakes?

Watson: “One of Frank’s great strengths is that he is a good leader, and he gave me a lot of responsibility as an assistant coach. As much as it will be a completely new experience being the boss and making the final decisions, I’ve spent a lot of time running training sessions, so that will require a big adjustment. I will certainly be bringing some of my own ideas to it in dealing with this group of players, but it will not be something completely new for them or me.”

CLS: You mention that you are a sum of all your experiences, but what one single piece of advice that you have received has been the most influential on how you feel you can get the best out of others?

Watson: “Be yourself and be honest to people. When you are dealing with players and young men, they are very perceptive, so if you are straightforward with them, even if sometimes they don’t like what you have to say, if you speak the truth, they will respect that.”

CLS: Your new role as head coach comes with the qualifier “interim.” Does that label create an elevated sense of urgency for you that you need to bring about a dramatic turnaround to deserve the position on a more permanent level?

Watson: “For me, the interim label is irrelevant. Every coach is somewhat interim, since your main responsibility is to get results. Very soon, we are going to sit down and discuss all of our goals, but first off I know it is to make the playoffs this year. It is pretty cut and dried. We’ve dug ourselves a hole, but there are a lot of games to play and as a coaching staff we have a lot of belief and a lot of confidence that we can meet that goal this season.”