Share All sharing options for: San Jose Earthquakes hold on for 2-1 victory over the Portland Timbers 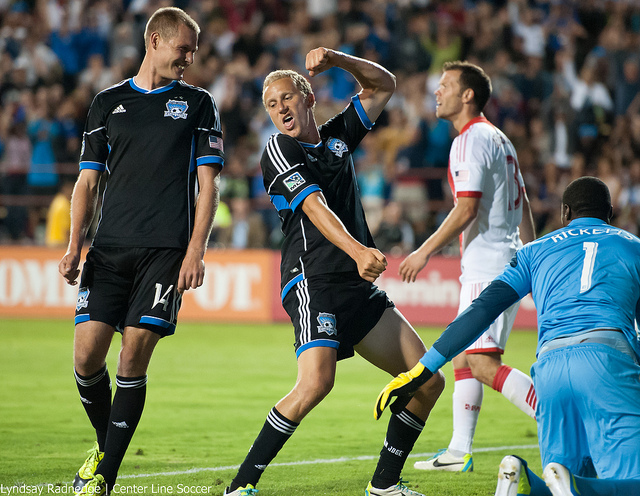 SANTA CLARA, Calif. — Nothing has come easy for the San Jose Earthquakes this season, so when the team found themselves down a man and nursing a one goal lead, each of the ten players on the field had to dig deep within himself to secure a vital 2-1 victory over the Portland Timbers.

“Portland is a good team and very dynamic,” said interim head coach Mark Watson, “so it was a challenge for us all night defensively. They put us under so much pressure at the end, but our guys held their shape, had composure, and won the battles. Seeing the game out, down a player, will give our guys some added confidence.”

Two goals by the Earthquakes (7-9-6) early in the second half, the first a Victor Bernardez penalty kick conversion and the second a Steven Lenhart free kick finish, proved to be just enough to counter a late strike from Portland’s Darlington Nagbe. Following Marvin Chavez’s sending off for earning consecutive yellow cards with 5 minutes remaining in the match, goalkeeper Jon Busch was the hero down the stretch in preserving the 2-1 win for San Jose.

“Busch was big in the box,” said Shea Salinas. “When they were sending in ball after ball, he was punching them away or making a big save. He was humongous for us in that last ten minutes.”

The Timbers (8-3-10) suffered only their second road loss of the season with the result, but they did not go down easy. Having Chavez ejected from the match served to test a determined Quakes defense, and they passed with flying colors.

“Concentration is key in those moments,” said Bernardez through a translator. “We talked on the field after Marvin was sent off and said we have to close down all the spaces and be really tight on defense.”

The result, the second win in a row for the Earthquakes over Cascadia competition, kept the team perfect on their current three game MLS home stand and marked San Jose’s first ever win over the Timbers.

“It was a huge result for us,” said Sam Cronin. “We must do really, really well at home and pick up almost maximum points to give ourselves a good chance at making a run at the playoffs.”

That San Jose will be adding reinforcements in the coming week with the return of Chris Wondolowski and Alan Gordon from international duty and the addition of summer signings Clarence Goodson and Jaime Alas serves to add to the building confidence in the locker room.

“We’re on the rise now,” said Bernardez. “We had a bad start to the season, but now we are playing better and with confidence. We came back in this game; now we have to come back in the season and finish strong.”

A cagey start to the match seemed fitting as a less than full strength Earthquakes squad looked uncertain how to break down the disciplined Timbers defense. Meanwhile, the vaunted Portland possession game was in full display, disrupted sporadically by the high-tempo effort of the Quakes’ central midfield duo of Cronin and Rafael Baca.

English defender Jordan Stewart, making his first appearance for San Jose, brought a sense of calm to the left side of the formation, and the Earthquakes progressively showed more confidence in running at the Timbers back line. For a 5 minute stretch 20 minutes into the stalemate, the Quakes made repeated forays into the attacking third, having looked to have solved the Portland defense, but Donovan Ricketts was never tested throughout.

Following the San Jose offensive flow came the inevitable ebb, and the Timbers were quick to capitalize. In the 31st minute, a heads-up play by Busch denied Portland striker Ryan Johnson in the area as the visitors surged forward with pressing runs through the center of the field. Venturing outside with the middle of the Earthquakes defense compacted, Rodney Wallace delivered a sublime ball into the box, but Timbers’ captain Will Johnson flashed a header wide tantalizingly wide of the target.

The Earthquakes, with forward forces Wondolowski and Gordon camped out in Chicago awaiting Sunday’s Gold Cup Final and not available to face the Timbers, welcomed Adam Jahn into the starting eleven as a partner with Lenhart. The rookie out of Stanford provided a surprising dose of physicality to the proceedings as his efforts kept alive the “Bash Brothers” mentality in the Earthquakes offense. In the 34th minute, after separating himself from center back Andrew Jean-Baptiste, Jahn climbed high to reach a Chavez cross, but he glanced his shot disappointingly past the far post.

The Timbers bounced back resurgently over the last 10 minutes of the half, and twice nearly broke through for the game’s first goal. A soft foul call against Chavez was awarded to Portland playmaker Diego Valeri in the 45th minute, but the Argentine designated player scorched the free kick inches above the crossbar. In first half stoppage time, Busch made the first save of the match by either goalkeeper as parried a close range effort from Will Johnson out of the six-yard box.

Good things are said to come in threes, and opening the second half, the Earthquakes almost made it a truism. After earning a dubious free kick at the center line, the delivery was poorly cleared by the Portland defense for a San Jose corner kick. Rather than capitalize on the set piece, a Bernardez header that had beat Ricketts was cleared off the goal line by Jean-Baptiste. Ricketts made amends for his missed save minutes earlier by expertly pawing a Stewart shot over the crossbar.

Sensing the need to spark the Quakes on offense, Salinas brazenly dribbled a ball through the Portland midfield in the 53rd minute only to get tripped up in the area by Jean-Baptiste. Referee Drew Fischer did not hesitate to point to the spot awarding the Quakes a penalty. With Wondolowski away on national team duty, up stepped Bernardez to take the kick, and following his trademark stutter-step run up to the ball, blasted his shot low into the net.

In the 58th minute, after being fouled on a long ball down the left flank, Lenhart positioned himself in the area and redirected a Salinas free kick past a diving Ricketts to double the Earthquakes lead. A shimmy-shake dance celebration by Lenhart, described by Salinas as “The Booty Dance,” punctuated the play and galvanized support from sold-out Buck Shaw Stadium.

The Timbers, stunned by the two goal outburst from San Jose, increased their intensity in response, and thrice in the next 10 minutes threatened the Earthquakes’ goal. Pouring forth with numbers, Portland’s best scoring chance came in the 66th minute when substitute Frederic Piquionne rattled the crossbar with a shot that only the slightest touch from Bernardez elevated above the target.

More adventuresome in searching for a goal, the Timbers ceded significant portions of the field to the Earthquakes on the counterattack. In the 73rd minute, a well deposited cross from Steven Beitashour into the area found the head of Jahn, but the forward sent his shot into the wrong side of the far post netting.

Unable to net a third goal proved costly for the Quakes, as in the 83rd minute the Timbers halved the lead through a Nagbe finish. After receiving a long ball from Valeri at the top of the area, Piquionne set-up Nagbe for the goal with a perfect no-look flicked on pass.

After toying with the Timbers defenders with taunting cross-over moves earlier in the half, Chavez suffered a rush of blood to the head in the 85th minute and received consecutive yellow cards to earn an ejection from the match. After a sliding tackle by the Honduran brought down Pa Modou Kah for a free kick near the center line, Chavez petulantly touched away the dead ball and was given his walking orders by Fischer.

Energized by Chavez’s error in judgment, the Timbers pressed into the attacking third in search of an equalizer, but time and time again Busch was able to keep the ball out of his net. The Earthquakes season-to-date MVP preserved his side’s 2-1 lead through four minutes of stoppage time, and at the sound of the final whistle, San Jose celebrated consecutive victories for the first time in the 2013 season.

The Quakes will look to make it three victories in a row when they host bottom of the Western Conference table Chivas USA next Saturday evening at Buck Shaw Stadium.