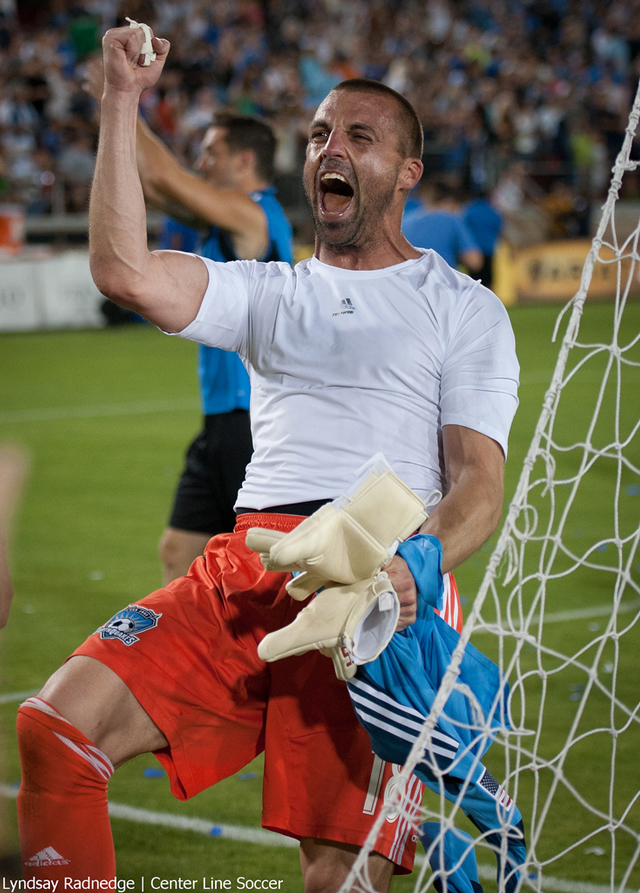 In front of a packed stadium, against your most hated rival, down a goal and down a man, seemingly destined to defeat, you wait until the dying moments of the game before storming back to victory, chaos fills the crowd, and a booming fireworks show lights up the night sky? Sounds like the script to a sure-fire summer Hollywood blockbuster.

But this wasn’t Hollywood, rather, it was 400 or so miles north of that, at a sold-out Stanford Stadium. And the script goalkeeper Jon Busch was referring to wasn’t turned into a big budget action movie, it was played out as another chapter in the great California Clasico series, one in which the San Jose Earthquakes played heroes in vanquishing the LA Galaxy by a score of 3-2. Real life drama trumps the made up every time.

So how did the Quakes pull it off, topping the rivalry match played at Stanford the year before that to some was the best MLS match of 2012? Well, as Busch described, they team dug a bit of a hole, and rather than giving up, reached deep within themselves to summon an amazing comeback effort.

“When you go down a man, and the score is 2-1, were going to go three (defenders) in the back, because we are trying to get that second goal to tie it back up,” said Busch “Yes, they are going to get more opportunities, they are going to be able to counter on us little bit, but credit to Steve (Beitashour), Jason (Hernandez), and Justin (Morrow), and everybody else for digging in and helping track back and defend as best as we could in those situations.”

With less than a quarter of an hour to go, the Earthquakes emotional leader on defense, Victor Bernardez, was shown a second yellow card for a tackle on LA Galaxy’s Juninho. Video replays seem to show that the Brazilian midfielder embellished the call, but Big Vic had no choice but to retreat to the locker room after seeing red. For the 10 men remaining on the field, it would have to be all hands on deck to get through the match.

“All the guys in front of me did all the dirty work, so credit goes to those guys,” said Busch. “It was hot, but they kept tracking, they kept blocking shots, the kept tackling people, so they did a great job.”

However, it wasn’t just the defenders that kept the score at 2-1 and set-up the wild stoppage time finish from Shea Salinas, Alan Gordon, and the rest of the Quakes offense. Busch himself was instrumental in keeping the scoreline as it was, making a string of incredible saves down the stretch. The normally even-keeled goalkeeper, who even on nights like against LA when he made the extraordinary look ordinary, is never one to lose decorum.

But not on this night. As the goals poured in, less than a minute apart, and with the entire stadium in a frenzy, Busch celebrated on the field with passion and gusto to match. So how did he explain his uncharacteristic, but welcome, outburst?

“I think it was a little bit of everything,” said Busch. “First and foremost, it was getting the three points in a difficult situation, and that was the key. We persevered through another trying time with Bernardez getting the red card. Being in front of 50,000 fans as well for us was a part of it, filling them with excitement and feeding off of them.”

The celebration was also a culmination of all the effort and many hours of time spent in support of a cause that Busch relates to on a very personal level: The Navy SEAL Foundation. As part of the Earthquakes’ Salute to Armed Forces celebration at Saturday’s game, Busch hosted a section of fans that he treated to a post-game Q&A and signed souvenir t-shirts.

“For me it was a very personal night with the Saves for SEALs stuff going on. That’s very dear to my heart. You can’t have scripted it any better. To be able to pull that off, not just in front of 50,000 people, but the over 100 people in my Saves for SEALs section, so for me that was the final personal little touch that made for a great ending.”

That Busch did not leave the stadium until over two hours after the final whistle with a testament to his dedication to those fans that supported him and his cause. Busch also wants others to get involved as well: his game worn gloves and cleats are being auctioned off on eBay as part of the effort to raise money for the Navy SEAL Foundation.

The California Clasico victory marked a great beginning to the Earthquakes summer schedule, especially after the defending Supporters’ Shield winners had started the season so slowly. With 16 games left on the regular season schedule and the team’s goal clearly stated of qualifying for the postseason, such an emotional win as Saturday’s against LA could help springboard the Quakes up the standings, and Busch couldn’t agree more.

“Obviously we are hoping to build off the momentum we gained the other night and the great finish and hopefully that will turn something on for us in the second half of the season.”

At least for one night, everything was perfect. Now the Quakes will attempt to channel that emotion and energy forward as they attempt a summer surge and run to the playoffs.