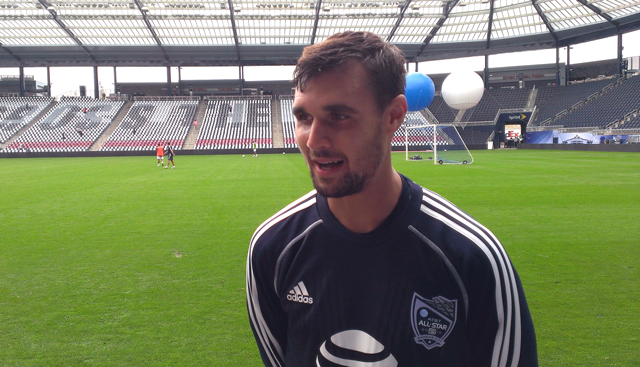 KANSAS CITY, Kansas — The summer has been very good to Chris Wondolowski. From winning the CONCACAF Gold Cup with the U.S. Men’s National Team and sharing the golden boot award with teammate Landon Donovan to representing MLS against A.S. Roma at the All-Star game in Kansas City, the San Jose Earthquakes forward has been all smiles throughout the month of July.

Walking with an aura of confidence as he made his way over the edge of the Sporting Park pitch following the All-Star’s training session, it came as no surprise that Wondo, who is always game for a challenge, was looking forward to Wednesday night’s MLS showcase midsummer event.

“It’s always a great opportunity and such a fun week the league puts together, especially here in Kansas City,” Wondolowski told Center Line Soccer. “They are doing it right, and it’s so cool to see how far it’s coming along. Being able to hang with these guys that I play against every week and get to know them off the field as well has been great.”

The MLS All-Star match (Wednesday, July 31, 8:00 p.m. ESPN2) might be an exhibition, but the league looks at its midseason event as a measuring stick against some of the top teams in world soccer. This year’s opponent from Italy, A.S. Roma, is led by U.S. international and MLS alum Michael Bradley. For Wondolowski, the game may not matter in the standings, but he still cherishes the opportunity to play with some of the same players he calls his opponents every other week of the season.

“We are all competitive people, so we are going to go out there and try to get a result. Obviously, Roma is a very good team with a lot of talent, so it is going to be tough, but we have some good guys out there as well.”

Back at the start of July, Wondolowski left following the Quakes amazing comeback victory over the LA Galaxy at Stanford Stadium to join Jurgen Klinsmann’s squad for the Gold Cup. His first stop on the cross-country odyssey was for a pre-tournament friendly against Guatemala in which Wondo scored his first goal for the national team. The floodgates opened, and the striker notched five goals over the next two games to capture a share of the Gold Cup golden boot.

“It’s pretty cool and something I’ll always remember. Scoring that first one down in San Diego before the Gold Cup really helped me get something going. It was awesome to win the golden boot as well.”

Wondolowski shared the award with Donovan, as well as Panama’s Gabriel Torres, and during the ceremony at the conclusion of the Gold Cup, all three took the stage to hold aloft the trophy. On the television broadcast of the presentation, Donovan could be heard rhetorically asking of they would have to share the trophy too. Not the case, according to Wondolowski, who at the time found the question amusing, but later was informed that he would get his own golden boot to bring home to San Jose.

“It was funny,” Wondolowski said with a laugh. “All three of us were there and it almost felt like I was photo-bombing the presentation, but it was good. I have my trophy with me here and don’t have to share with the others!”

July has been a whirlwind of activity for Wondolowski, but when the calendar turns to August the day after the All-Star match, he will be on a plane back to San Jose, ready to lead the Earthquakes forward in MLS and CONCACAF Champions League play. With only 5 goals so far this season, Wondo’s 6 goals with the national team marked a significant advance in his offensive productivity. Scoreless prior to this USMNT experience, the striker wants to bring his current form for country back with him for club.

“I feel very confident in my ability and my play right now. Especially as a forward, when you play with confidence, it can snowball. I hope to continue that when I get back.”

The stars and stripes were his jersey of choice for the last four weeks, but that did not stop Wondolowski from keeping track of the Earthquakes. Highly competitive and always ready to play, he found it a challenge to sit back and simply be an observer of the games.

“It was frustrating at times watching them play. I’m surprised I didn’t throw my computer through the wall a couple of times. It can drive me nuts, and I lost some hair, but I am so proud of the guys for playing so well, especially the last few weeks. Seattle and Portland, they are such tough battles, but the guys moved the ball really well.”

Joining him in San Jose will be new center back Clarence Goodson, the U.S. defensive standout during the Gold Cup. Together, the pair is expected to be back in Blue and Black for the Quakes next match this Saturday against Chivas USA, and Wondo feels that supporters are in for a treat when they see in person the player he has trained with for the last month.

“He’s going to make a big impact. He’s a great player, very calm and cool on the ball, but that is most impressive is the way he reads the game. He’s very athletic and dominant in the air, great at intercepting passes and running players off the ball. He’s a very, very important addition.”

The Earthquakes have made it a priority to limit the opposition’s scoring chances, and Wondolowski is confident that Goodson will fit in perfectly with that goal.

“Something we have been working on for the last few months is shoring up our defense, and he is going to bring some valuable leadership back there.”

With San Jose clinging on to its playoff hopes, contributions from both Wondolowski and Goodson will be required if the team is to make a second straight appearance in the MLS postseason. For Wondo, the month of July has been full of accomplishments, but he looks forward to getting right back into the swing of things with his Earthquakes teammates.