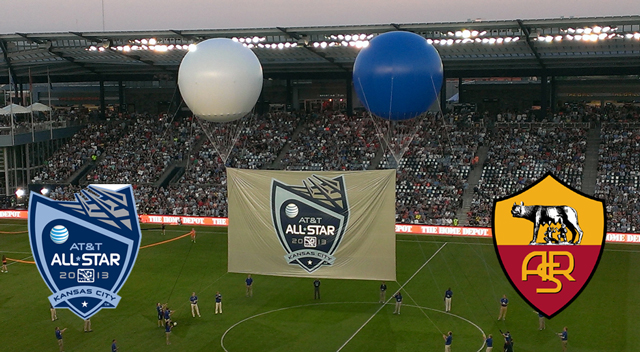 KANSAS CITY, Kansas — A stadium record 21,175 packed Sporting Park in Kansas City to watch their favorite MLS all-stars take on A.S. Roma Wednesday night, but they instead were delivered a clinic in Italian football as the storied Serie A club cruised to a convincing 3-1 victory.

Early goals in each half and a third goal midway through the second paced Roma to a 3-0 lead that never looked in danger. LA Galaxy defender Omar Gonzalez tallied the lone MLS goal in the first minute of stoppage time to provide a quantum of solace to the Kansas City supporters that were chanting for a goal.

“Roma is a team with a lot of quality,” said Gonzalez to a crush of reporters after the game. “The overall experience was great and I just tried to enjoy myself as much as possible.”

San Jose Earthquakes forward Chris Wondolowski, fresh off helping the U.S. Men’s National Team capture the CONCACAF Gold Cup, entered the game as a substitute at halftime for the MLS All-Stars, but even the reigning MLS MVP could not turn the tide of Roma’s dominance.

“I thought we played a decent brand of soccer out there tonight,” said Wondolowski to Center Line Soccer following the match. “Obviously, the result was nowhere near want we wanted, but it was still fun.”

Wondolowski, who was making his third straight appearance in the MLS midsummer All-Star game, left the field impressed by the level of the competition. Against Chelsea FC of the English Premier League last year, Wondolowski collected a tidy goal for MLS, but this year the stingy Italian defenders blanked the Quakes striker.

“What they showed us today is just how talented they are, especially in the way they are able to string together passes,” said Wondolowski when asked to compare the two All-Star opponents. “But what impressed me the most was how organized they were defensively. They were so effective at clogging up the middle and it so hard for us to break them down. When it came down to it in the box, they were as strong as can be.”

Did Wondolowski expect anything less from Roma?

“That’s the Italian way,” he continued. “It always has been and it is why they’ve won World Cups and Champions League titles, so it was not a coincidence.”

Often propped up as a measuring stick for MLS to compare itself with the big leagues in world football, the All-Star game is more about the scoreboard for the participating players, something Wondolowski thinks gets lost in the one-off game format of the annual event.

“I know Americans can be results driven, but it’s so hard to get results here,” explained Wondolowski. “The measuring stick should be how we played out there, and I thought we were connecting a lot of passes and you could see the skill all over the field.”

A competitive match, but an exhibition nonetheless, the annual MLS All-Star game is more a showcase for the league and a gathering point in the middle of the season for many of its best players. While Roma arrived in the United States to play a series of preseason matches ahead of the start of the Serie A season in August, the MLS players were more than happy to connect both on and off the field.

“It was very enjoyable,” said Wondolowski. “The thing I love the most about this event is being to meet all these guys on and off the field. We play against each other each week for 90 minutes, but now we get to know one another a bit more. They are great on the field, but they are even better guys off the field.”

All-Star head coach Peter Vermes made full use of his squad against Roma, as fellow Gold Cup golden boot winner Landon Donovan also entered the game at halftime. In four weeks together with the national team, Wondolowski and Donovan played well together, and Vermes saw an opportunity to give the MLS rivals one more chance to see the field together before heading back to their respective clubs.

“I thought both those guys did well,” said Vermes during his postgame press conference. “Landon is a world class player that does so many things on the field that I don’t think people realize that gets taken for granted. And Wondo, we had to play him a little bit out of position a little bit. He likes to play closer to goal, but we had him wide at times. They did a hell of a job.”

By this weekend, the two All-Stars will be back to the task of trying to lead their teams to the MLS playoffs, but for at least for another 45 minutes on the field, and a couple days off of it, they kept up their camaraderie.

“Absolutely,” said Wondolowski emphatically. “I enjoy every minute I get to spend with him. He is such a great player and a great person as well so I had fun with it. He is enjoying the game so much right now and you can see it in his face.”

With the match finished and the end of an entire month away from the Earthquakes behind him, Wondolowski looked relaxed as he stood in the luxurious Sporting Park locker room. This wasn’t Buck Shaw Stadium to be sure, and he was enjoying the chance to partake in some of its offerings, including the full sized recliner chair that was stationed in front of his locker. Was he thinking about bringing it home with him on his flight back to San Jose?

“I hope so,” laughed Wondolowski as he glanced back at the patent leather beauty. “I think that’s our All-Star game parting gift, these chairs. We are going to pick them out, though I might have to use check-in.”

Carry on or check in, for all that Wondolowski has accomplished over the last month, a comfortable chair is the least of what he deserves.