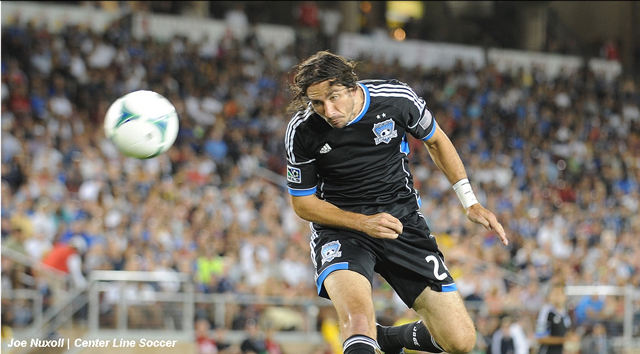 The San Jose Earthquakes, playing with much the same emotion but without many of the players that saw them earn an exciting victory last Saturday against the LA Galaxy, dropped a tough 3-2 decision against the Chicago Fire at Toyota Park.

After Alan Gordon had staked the Quakes to a one goal lead, Dilly Duka and Patrick Nyarko scored either side of halftime to put the Fire ahead. San Jose collected an equalizer through an own goal, but a late game strike from Chris Rolfe gave the Chicago a lead they would not relinquish.

“We created a lot of chances,” said interim head coach Mark Watson, “but we had a few lapses of concentration in the back and that’s something you cannot do on the road and expect to get a result.”

The Fire, who have not lost in MLS action since May 18, faced an Earthquakes side that was missing a number of key players. Chris Wondolowski, Nana Attakora, and Marvin Chavez have been called up by their respective national teams for the upcoming CONCACAF Gold Cup, while Steven Lenhart through injury and Victor Bernardez and Shea Salinas through suspension also were unavailable.

“We had a new group and there were a lot of changes from the last game,” continued Watson, “so we didn’t have a lot of time to prepare the team, but regardless we’re disappointed with the result and we will keep working.”

Watson handed defender Brad Ring a rare start at center back in partnership with Jason Hernandez, while also giving midfielder Mehdi Ballouchy his season debut. Just 4 days removed from the 3-2 victory over the Galaxy, the Quakes featured 5 changes among the 10 outfield players in the starting XI.

“We put in a great effort and did a lot of good things,” said Hernandez, “but, at the same time, we made mistakes that we got punished for. Any time we set off on a road trip and are missing five starters from the match before, we’re behind the eight ball.”

One holdover from Saturday’s starting line-up was goalkeeper Jon Busch. Playing against his former team, Busch put in a good effort on the night, but he couldn’t keep an energized Chicago squad from finding the back of the net on three occasions.

“We weren’t as organized as we would like to be,” said Busch. “We got broken down. Tomorrow, we’ll look at the tape and make some adjustments for the weekend. We have to keep battling and keep organized. When we are hard to break down, we are in every game.”

The Earthquakes, who saw their season record drop to 5-8-6, will travel directly from Chicago to Boston for a weekend match at the resurgent New England Revolution.

Despite the weakened line-up, the Quakes opened the match on fairly even terms with the Fire, and in a moment of individual brilliance from Gordon, took an early lead.

Gordon, a notoriously streaky scorer, tallied his third goal of the season in the 14th minute after he headed home a rebound from his own shot on goal seconds earlier. With many of the Earthquakes pushed into the attack, a poorly cleared ball was intercepted by Steven Beitashour and lobbed back into the box. Gordon, rising high over center back Bakary Somare, sent a header over the goalkeeper, but off the crossbar. Not giving up the play, the Cali Clasico hero and reigning MLS Player of the Week followed up the play and put the Quakes up 1-0.

Much like San Jose has done this season, Chicago has often started games slowly and required going down a goal to get fired up on offense. Twice in the next 10 minutes of the match, goalkeeper Busch was called into action, saving a blistering effort from Duka in the 17th minute and a long range effort from Nyarko in the 28th minute.

The Quakes capitulated in the 36th minute, as a ghosting run into the box by Duka left him time and space to receive an entry pass from Gonzalo Segares, elevate the ball with his right foot, and bounce a shot off the turf with his left foot that eluded an off-balance Busch and leveled the score at 1-1.

The Earthquakes played with more verve for the remainder of the first half, but could not capitalize on a pair of scoring opportunities by Gordon in the 38th and 45th minutes. The teams entered intermission tied on the scoreboard and virtually even in all other offensive statistics.

The Fire took charge to start the second half, wasting little time to go ahead in the game, after Earthquakes defender Justin Morrow was caught ball watching in the 47th minute. Doing well to free himself of Beitashour at the byline, Duka sent a low cross through the area that was redirected into the back of the net by Nyarko. The Chicago winger had stepped in front of an unsuspecting Morrow to create a margin of space to get off the shot and earn the Fire a 2-1 advantage.

San Jose was stung by the early second half goal but slowly turned around the momentum in the match and began to create better chances in the attacking third. On a corner kick in the 72nd minute, the Earthquakes were gifted an equalizer, as the delivery went through the area and was deflected into the net by Jalil Anibaba. The Fire midfielder was under heavy pressure from Hernandez, who nearly stabbed home the ball himself for his first career MLS goal, but the official scorer instead ruled it an own goal.

Unlike last Saturday, when the Earthquakes waited to equalize in stoppage time, they gave the Fire plenty of clock in which to get back on top, and they did so with relative ease in the 84th minute. MLS Player of the Month for June and Quakes nemesis Mike Magee dribbled the ball uncontested down the center of the field before picking out Rolfe making a run at the far post. Staying just onside in front of Morrow, Rolfe ran onto the pass and slotted a shot past Busch to restore the Chicago lead.

The Quakes did everything they could during 4 minutes of stoppage time to earn a point against the Fire, but the visitors couldn’t find a shot on goal. San Jose, for the fifth time this season, failed to win after posting a victory in their previous game, and are now 0-4-1 in that scenario. The Earthquakes continue their busy week with another road match on Saturday against the New England Revolution.