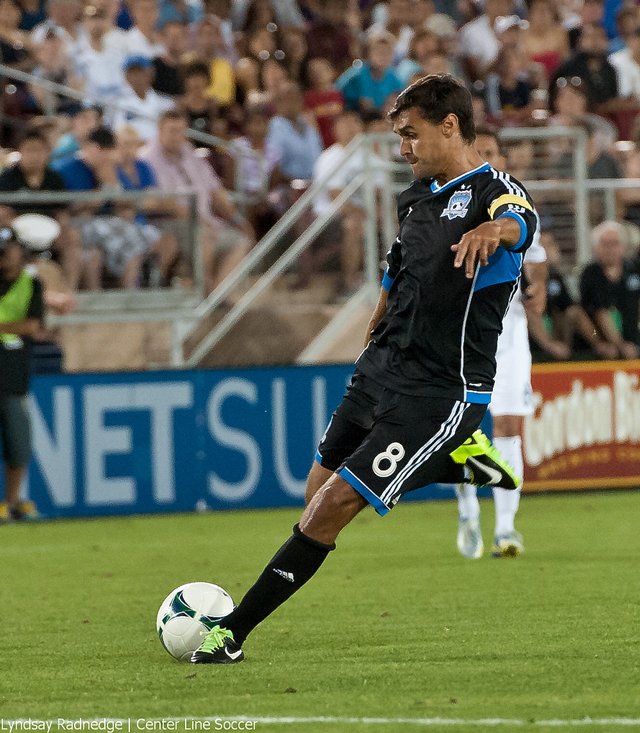 (San Diego, CA) — The Unites States’ 6-0 crushing defeat of Guatemala featured a goal-fest from Earthquakes past, present, and future.

Wondolowski’s coach was just as happy as the Quakes’ star striker was to finally get his first international goal after twelve games.

While Wondolowski has not been in the same scoring form as last year, Klinsmann said his personality and attitude were important values to the national team.

“He’s somebody who keeps the chemistry together and keeps the group together,” said Klinsmann.

“You know what you get from him every game, a fighter, a warrior,” Klinsmann continued. “He’s the same in training as games-he’s hungry for goals.”

And that faith from the coach finally paid off for the 30-year-old striker from Danville. Wondolowski entered in the 59th minute as part of a United States line change that included Alejandro Bedoya and Brek Shea.

“It’s great he has confidence in me,” Wondolowski said. “I think that’s helped me and hopefully it’s continued momentum.”

The play that led to his goal started with Donovan trying to thread a ball to Wondolowski’s former teammate in Houston Stu Holden sprinting into the box, but a touch from a defender redirected the ball into the Quakes forward’s path.  So just how big were Wondolowski’s eyes when the ball fell to him and just the goalkeeper in front of him?

“They were pretty big,” he laughed. “They usually are when I get a chance.”

San Jose was well represented on the U.S.’s fifth goal of the night, as new Quakes’ acquisition Clarence Goodson knocked in his fourth career international goal in the 84th minute, a nice rebound to the top of the net.

“I was excited,” Goodson said afterwards.  “I knew there were a lot of people in the way. I was yelling at Wondo and he hopped out of the way for me.”

The 31-year old Goodson, who played the entire game in central defense, saw the Americans getting better as the game went on.

“The first half was a little lackadaisical at times,” admitted Goodson. We haven’t so many training sessions so it was important to have this game tonight.

After originally picked by San Jose in the 2007 Expansion Draft but pursuing his professional career in Europe, Goodson was looking forward to returning to MLS and playing with Wondolowski once the Gold Cup is finished this month.

“I’ve been asking him (Wondo) all sort of questions, I know he’ll at some point ask me to go away,” laughed Goodson.

With the United States’ first Gold Cup game against Belize on Tuesday, Klinsmann was glad to use the Guatemala friendly to supplement the hard training sessions. He looks to build the team up through the entire tournament.

“They are very intense because it’s 23 guys fighting for spots and all excellent players,” Wondolowski said of training this week.

“I think I’m in good shape. I’m in midseason form, so not trying to knock some rust off or anything. I can just jump in and do as much as I can.”