MLS Insider, the expertly produced weekly series from the NBC Sports Network, makes a visit to San Jose this week to profile the Earthquakes "Bash Brothers" Steven Lenhart and Alan Gordon. Get ready for intensity on the field and hilarity off of it as the not-so-identical twins go prime time. 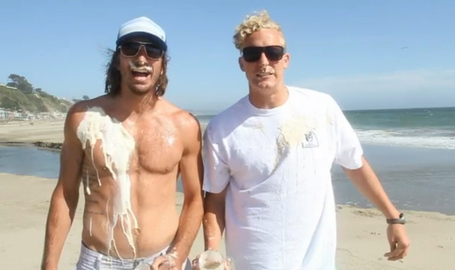 Since its debut earlier this summer, NBC Sports Network's weekly series MLS Insider has become must-see TV on Friday nights. A perfect complement to NBC's MLS 36 show, which documents 36 hours in the life of various MLS players (including Chris Wondolowski in the debut episode), MLS Insider allows for many of the stories of the week to be presented in a single 30 minute show.

So what is on tap this week? Besides a sure-to-be emotional story of New England Revolution goalkeeper Matt Reis and his actions following the tragic Boston Marathon bombings, MLS Insider is providing some insight into the latest Bay Area Bash Brothers Steven Lenhart and Alan Gordon.

Controversially physical on the field of play, the duo are very down to earth off of it. The two forwards, to show their commitment to the success of each other, exchanged uniform numbers going into the new MLS season in an odd move of solidarity (after all, they couldn't actually share the same number).

Lenhart and Gordon are frequent visitors to the beaches of Santa Cruz when not at work in San Jose, befitting their personalities in such a quintessential Northern California way. They may not be brothers by birth, but they are near-identical twins when it comes to their outlooks on life.

So get pumped up for round two of the California Clasico on Saturday by watching the latest MLS Insider. And in case you forgot how downright silly Lenny and Gordo can be together, check it these blast-from-the-past root beer float bloopers.