Fresh on the heels of MLS Insider’s coverage of the Bash Bromance, Steven Lenhart is again the center of attention on his eponymous Chia Pet night at Buck Shaw stadium on Sunday September 8th. Since the news broke mid-August, Quakes fans have been clearing spaces on their windowsills eagerly anticipating the San Jose Earthquakes giveaway, and are ready to cultivate their own luscious Lenhart locks.

A brilliant idea first germinated in the San Jose Earthquakes front office, and has sprouted into the MLS marketing promotion of of the year: Steven Lenhart Chia Pet Night.  Ironically, 2013 sees a shorn version of Steven, and I wonder if the current struggle of the San Jose Earthquakes to repeat their playoff contention of 2012 might be some Samson-like power loss.  Last season, as the Earthquakes lifted the Supporters' Shield, Lenhart was revered for his resplendent golden mane.  Perhaps last year’s success on the field can be restored to this season with the giveaway of 2500 mini mops of mojo on Sunday. 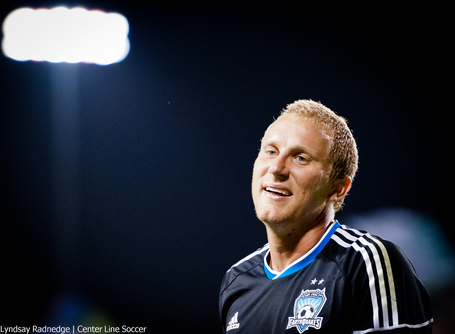 Lenny is a forward, and so naturally the upkeep of the Chia Lenny® is, well, straight forward.  Here's the dirt on fabulously frizzy follicles.

Once the growing cycle is complete, you can reuse your Chia Lenny® indefinitely.  Simply scrub the planter and replant it with more Chia seeds, or if you are in the mood for culinary adventure, you can use herb seeds, such as basil, alfalfa, marjoram or thyme.  In the meantime, patiently wait for the resplendence to happen.

Now that the seeds have been sown - as it were - many other MLS clubs might also be considering hirsute Chia Player® candidates – Nick DeLeon (DCU); DeAndre Yedlin (SEA); and perhaps the Graham Zusi (SKC) for the novice gardener.  Clint Dempsey can grow a beard in 4 hours flat – the Deuce-Chia® would be a tricky design, be difficult to cast, and require an intricate water supply.  Assuming extra-fast growing seeds can be developed, that would be Ch-Ch-Ch-Charming. The Sounders could also market the Chialrie Joseph®, and like Real Salt Lake's Kyle Beckerpet® would be planted with kudzu seeds.  This more radical design, one that could take over the world, is currently under review by the USDA who is currently crafting an environmental impact report.

The marketing possibilities extend beyond MLS: Manchester United could follow with the Bobby Chiarlton® comb-over – just plant the seeds on one side, shine the light on the opposite side, and let nature take care of the rest.  Or perhaps the Wayne Rooney – just pre-sprout some additional seeds and plug them in to customize the hair line to your liking.

Thinking even further outside the holiday gift box: the Chiandon Donovan® would be the first choice for a line of Reverse Chia Pet® designs: the planter comes fully pre-sprouted, then you don’t add water and stand back as the "hair" gradually falls out.  Other Reverse Chia Pet® candidates include, Justin Mapp, Conor Casey and any USMNT goalkeeper you might care to mention.