With the Quakes anniversary party just a day away, the schedule of events for the evening has been released.

The lead-up to the celebration at San Pedro Square Market has been tremendous. Earthquakes team president Dave Kaval has appeared on virtually every form of media -- including his pair of Google Glass -- in the lead up to the party discussing the background of the club's re-branding efforts. The Cliff-Notes version of the message from those appearances: The pillars that support the club's identity are Unity, Devotion, and Heritage.

What has not been ubiquitous in the last few weeks are leaks of the new logo design. Though Kaval himself has said the process of re-branding was initiated 18 months ago via focus groups of fans and former players, the actual drafting of the new logo was undertaking in near-secrecy. The design firm, located outside of the Bay Area, has communicated directly with a very small number of Quakes officials -- surprisingly, Kaval was not one of them -- in an effort to keep the prototypes of final design under wraps. Many in the organization will be seeing the logo, alongside the 3000+ fans in attendance, for the very first time.

The only clues regarding the logo have come from some of Kaval's comments, notably that the new look will bring back some degree of the color red. Expect blue and black to still be the primary colors, but splash of NASL-era red is certain to be part of the hue palette. In addition to the color changes, the new logo is intended to represent the club's three pillars and its connection to the community. How that will be accomplished remains to be seen, but whatever form it takes will be a refreshing change from the current, soon to be old, Earthquakes logo.

Following the unveiling, uber-Quakes fan Lars Frederiksen will preform his new Earthquakes anthem with his band, The Old Firm Casuals. The lead singer of Rancid, Frederiksen can often be seen at Buck Shaw Stadium during the season. In a curious twist, his Rancid bandmate Branden Steineckert penned the anthem of the Quakes rival Real Salt Lake.

Fans are encouraged to arrive early for the anniversary party as parking can always be a challenge in the event's location. A ticket is not required, but RSVPs on the club's website enter fans in a drawing for new branded merchandise. 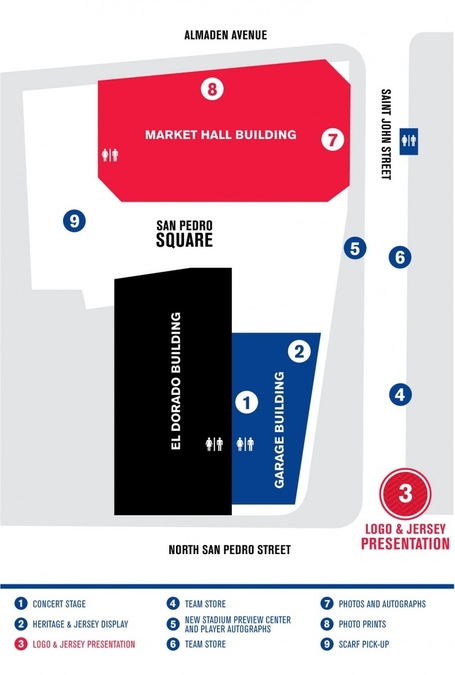