Yannick Djaló was the second half spark for the Quakes first win of the season; 1–0 over conference rivals Chivas USA. His swift movement on to Shea Salinas’s arcing cross proved the old adage: there’s always room for Djaló.

Yannick Djaló was the second half spark for the Quakes first win of the season; 1-0 over conference rivals Chivas USA.  His swift movement on to Shea Salinas's arcing cross proved the old adage: there's always room for Djaló.

The San Jose Earthquakes (1-2-3) returned home Saturday hoping to break their five-game winless streak that kicked off their 2014 MLS season.  This week's opponents, Chivas USA (1-4-3), were still looking for their first road win, coming off a 2-1 home defeat to the Seattle Sounders.

The teams entered Buck Shaw stadium on the crisp Saturday evening - the last time the Earthquakes won a game, Ramiro Corrales was on the field, and the erstwhile Quakes captain scored the opening goal tonight.  Unfortunately the ball hit the back of the net before the official kick off, as part of the pre-game ceremony in recognition of the Earthquakes 40th anniversary.  Perhaps Ramiro was tonight's talisman as the Quakes finally snapped their winless streak, six games into the 2014 MLS season, with a 1-0 victory over Chivas USA on a second half strike by new signing Yannick Djaló.

Neither side took control of the first half, a game with little creativity and few serious challenges to either goalkeeper.  One of the more effective partnerships on the field in the first half was Mauro Rosales working well with Eric Avila - their interplay appeared to draw the Quakes defense out of position, and hinder the effectiveness of Shea Salinas.

Any question of how Earthquakes defender Jordan Stewart would be handling Rosales for the evening was quickly answered in ninth minute, with the first of the five yellow (and one red) cards handed out by referee Allen Chapman on the night.  In fact, Rosales was involved in all three of the yellow cards handed out to Earthquakes Jordan Stewart (9'), Alan Gordon (17') and Sam Cronin (27') in the first half.

With Avila and Rosales drawing the Earthquakes defense away from their right flank, Bobby Burling was able to deliver crosses from deep midfield where Leandro Barrera took advantage of the open space.  As the first half wound down, the Earthquakes looked a bit more intimidating, and Bobby Burling used his shoulder to reintroduce himself to his former team mate Chris Wondolowski.  Valuable interceptions by Quakes defenders, notably Clarence Goodson, maintained the clean sheet going into half time.

Success for the Earthquakes was eventually sparked by the half time substitution of Yannick Djaló for Atiba Harris.  His ability to control the ball and find himself in open space immediately resulted in chances for Alan Gordon and Chris Wondolowski.  The stalemate was finally broken in the 66th minute when Djaló was able to volley Shea Salinas's arcing cross into the back corner of the net.  Just moments later, the Earthquakes seemed to have scored again, but Wondolowski was ruled offside.

Chivas USA's evening took another turn for the worse when goalkeeper Dan Kennedy was given a direct red card when he handled the ball a yard outside of the penalty area.  Alan Gordon chipped the ball at hand height on a breakaway run, and Kennedy automatically reacted despite being a yard outside the 18-yard box.  Midfielder Agustin Pelletieri was removed for the replacement goalie Tim Melia. 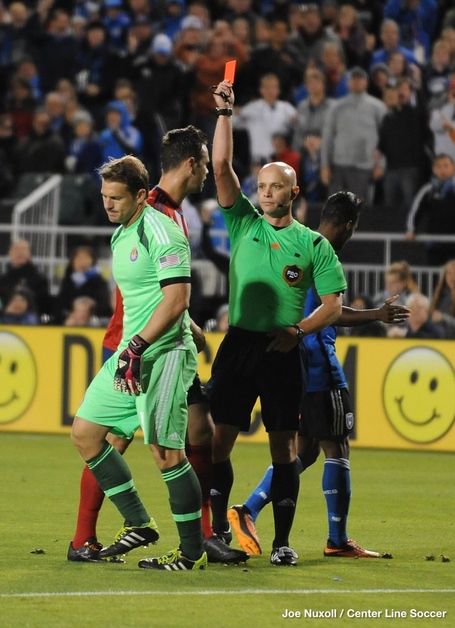 Melia's one handed save of Gordon's shot late in the game seemed to energize Chivas, and Quakes goalkeeper Jon Busch could be seen winding his arms like a third base coach to motivate his defense.  Chivas winger Leandro Barrera's pace was still threatening the Earthquakes in the dying moments, evidenced by his outpacing Cordell Cato (who replaced Salinas; 87th minute).  Cordell Cato spent the dying moments of the game protecting the ball, and the first win of the season.